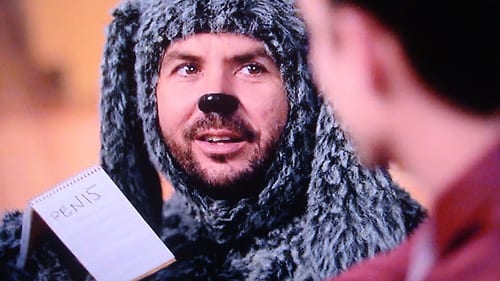 Wilfred, an official member of the Pen15 club!

Tonight’s opening quote—”Guilt: the gift that keeps on giving”—sets the stage for a comical and Aww!-inspiring night on Wilfred, with the return of Ryan’s sister, Kristen, and a brief appearance by her lover from season one, Dr. Ramos.

At the start of the episode, Ryan gets a message informing him that Kristen is on her way to his house. He and Wilfred go over what happened at the end of season one (the end of Kristen’s marriage) and it’s said that Ryan sent an apology email to Kristen for everything that happened. Wilfred whips out a pair of glasses, which Ryan discovers he stole. Wilfred apologizes and when he’s finished, his watch beeps. Guilty time is over, and he’s back to his normal, Wilfred self.

Kristen shows up at Ryan’s house, about six months pregnant. Wilfred initially thinks she’s just fat and when the realization about the pregnancy hits, he freaks out. “How could you let that Trojan horse into this house?” he asks Ryan in the kitchen. Again, Wilfred is obsessed with being cute and sees Kristen’s unborn baby as a threat. We discover that there is an ongoing war between dogs and babies over who is the cutest.

We learn that Dr. Ramos is the father and that he and Kristen are together. Wilfred is talking to the unborn baby, attempting to call a truce on the War on Babies. It doesn’t pan out well and just makes Wilfred more determined to get rid of it. Kristen goes to pee (no television show can truly display the amount of peeing one does when pregnant) and Ryan comments on her still being mad. Wilfred starts rummaging through her bag, trying to find an ultrasound so he knows what the baby looks like. He finds one…and a restraining order from Dr. Ramos. Ryan is determined to make things right between him and his sister. Kristen comes out and asks to stay with Ryan, telling some story about how her and Ramos’ condo is being renovated blah blah blah. She quickly takes over and Wilfred starts to lecture Ryan on guilt, and how it won’t go away unless he makes it go away.

Ryan and Amanda are eating at work, and Amanda is mentioning a rather gross story about back-faces and parasitic twins. They share a cute moment with tacos when Ryan gets a call from his sister. He, according to her, bought the wrong kind of kale. Wilfred is attempting to attack the baby with a vacuum, while singing a ridiculously creepy song. Ryan rushes home and finds Kristen on the couch, safe despite the moaning. She leaves and Ryan confronts Wilfred for his behavior (example: switching her prenatal vitamins for “morning after” pills). Ryan tells him to stop and ends up putting Wilfred behind a large baby/pet gate. Hopefully that gate works better on Wilfred than it does on any small child.

Ryan and Kristen are having dinner and she convinces him into cleaning the bathroom. She asks about his job and makes a few negative comments on it and his relationship with Amanda. She babbles about her and Arturo’s love for one another (is she even buying what she’s saying?). Wilfred attempts to get to her with wire on a fishing pole. The action leads Ryan to try to put Wilfred outside. But he pulls out the restraining order and Kristen finds out.

Kristen tells Ryan about Arturo leaving India to break things off with his wife and then being served with the restraining order a couple weeks later. She starts having stomach pains and once again Wilfred makes his point about guilt. When his watch beeps, he holds up a blue plastic bag and a pink plastic bag. Oh yeah, he just went there.

Kristen and the baby are fine, but the paramedics inform Ryan she should stay on bed rest. Dr. Ramos (the ever-amazing Nestor Carbonell of “Lost” and eyelashes fame) shows up to check on Kristen and confesses that he wants to be with Kristen, but his wife is making it difficult (sorry, Nestor. You’re cute and all, but not that convincing). Wilfred is clearly upset about the baby being okay. “How many innocent babies need to survive before we put an end to this senseless nurturing?!” Yes, the gall of nurturing innocent babies!

Kristen and Ramos are…loudly reuniting (totally banging each other) in Ryan’s bed, which leads to Ryan sleeping in the basement on his couch. Ryan tries to make Wilfred see the similarities between him and a baby. The poop cleaning. Drooling. (Let me just point out that eventually babies grow out of these, dogs do not…and yet I’d still prefer a furry baby.) Ryan asks Wilfred when it’ll end, and Wilfred poses the same question to him. “How long are you gonna hold onto it?” Wilfred asks Ryan about his guilt.”Until she forgives me.” Oh Ryan. You’ll never learn.

The next morning, Ramos and Kristen are eating breakfast. Kristen asks him to come over tonight but he and his wife have already paid for symphony tickets (yes, symphony tickets are so much better than “love” right?). Ryan confronts an already upset Kristen about her being there, particularly with Ramos. Kristen starts yelling and blaming Ryan for her predicament as a mistress and soon-to-be single mother. She realizes she brought this all onto herself by having an affair with Ramos. Ryan comforts her and tells her that feeling guilty won’t help. She admits that she doesn’t want to be alone. Ryan lets her know that she won’t be. Awww, so cute! Much cuter than dogs and babies combined.

Wilfred goes over to Kristen and he starts talking to the baby again. He wants to be friends. The baby invites him into the Pen 15 Club. Wilfred is thrilled. So was I when he went as far as writing it down and showing it to Ryan. We all know we’ve tried that trick in school so the teachers wouldn’t know what we were up to.

The two ending scenes before the credits are gold. Wilfred claims that “life doesn’t begin until the fetus is 10 years old.” and Ryan says he has no morals, which makes him so lovable in my opinion. The episode ends with Wilfred creepily grinning. When Ryan asks him why he’s smiling, Wilfred responds that he’s not, it’s hot in there. Ryan asks if he wants him to turn the AC on, and Wilfred answers with an emphatic “Yes!” It was more of a ‘why are you asking such a dumb question, just get up and do it!’ yes, making the scene that much funnier.

It was incredibly exciting to see Dorian Brown reprise her role as Kristen Newman tonight. I’ve been hoping to see her come back, especially after the way last season ended.  Let’s hope that this new development will mean that Kristen will be in more episodes. Kristen has her own kind of crazy going on, which has now been magnified by her pregnancy. I thoroughly enjoyed her character in season one (I probably identify with her a bit too much) and cannot wait to see what kind of pain in the ass pregnant Kristen is for Wilfred and Ryan.

What made tonight’s episode so great is that Wilfred says what is on everyone else’s mind, but isn’t said for fear of offending someone. The show does have weaker moments (we get it—pregnant women always have to pee, they have insane cravings, and Wilfred needs to be the cutest thing in the world), but tonight they were outweighed by the comedy (blue and pink plastic bags, voodoo dolls, the War on Babies, the loud “I missed you” sex).

The nicest thing about this episode was that it seemed less about Ryan. Sure, the catalyst for the episode was Ryan’s guilt from his actions at the end of season one, but the episode felt more Kristen-centric than Ryan-centric. It was a nice change from last week and only leaves me wondering what they could possibly have set up for next week’s episode. I almost don’t want to find out. Almost.