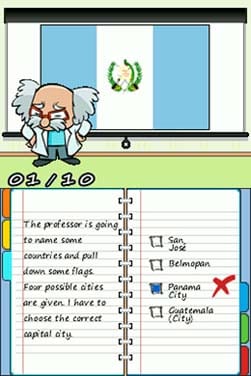 As someone who enjoyed the geography mini-game in Rockstar’s Bully, I was quite excited to try out Topoloco, a game that sells itself as a “fun way to learn world topography”. Knowing that Topoloco tries to be both a game and an education tool to help kids and adults brush up on their knowledge of maps and capitals, I was expecting it to be good at one of these things at least. Unfortunately, Topoloco isn’t fun nor does it do a good job of teaching you anything.

Developed by: Cloud Castle
Published by: Abstraction Games
Genre: Edutainment
Platform: DSi/3DS
What works: The professor makes you feel loved at least
What doesn’t work: Almost everything the game aims to achieve
[rating:.5/5]

Topoloco consists of answering questions that test your own knowledge of the world’s countries, their capitals, flags, and location on the map. The game takes place in a classroom and your guide is Professor Topoloco, your elderly instructor who wants to turn you into the next Topoloco, someone who is crazy about topography – hence the name of the game. This classroom concept works in most brain-training titles, but that’s because those games actually offer progressively challenging levels and mini-games that offer intuitive ways of keeping you on your toes. Topoloco just gives you the answers and hands you the task of memorizing them.

Each continent comes with practice questions that are supposed to prepare you for its final exam. One set of questions asks you to name the capital of the country shown on-screen, another gives you its flag and has you drag it to its respective country on a map, and the other three practice topics are variations of these questions. There is also a digital atlas that simply lets you wander around the globe and tap different countries to see their flags and capitals. That’s about it. Despite its title, there’s really nothing else the game offers in terms of topography: no details on a country’s elevation, vegetation, or even basic cultural facts.

After you’ve had your fill of all the practice modes, you can test your knowledge of each continent by taking its exam, which is just another set of questions that offers nothing more than a letter grade and some words of encouragement from your favorite professor. I understand there is only so much you can do with topography – you’re not training your brain to be faster or brushing up on historical trivia – but if the developers just give you information and make you memorize it, why didn’t they just create a set of flashcards instead of a video game? While the game may not be targeting a core gamer audience, casual gamers still deserve something fun worth playing. 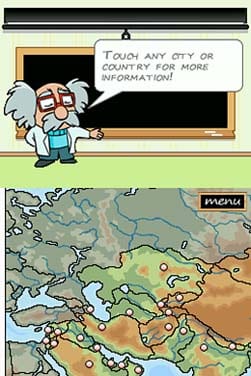 If children were to play this game, they might be confused as to what their parents’ intentions were. Topoloco isn’t a good teaching tool either. In fact, the game’s disclaimer distinctly states it should not be relied on for test preparation or when planning trips. Topoloco doesn’t include the continent of Antarctica or Australia, nor does it offer questions on Oceania because (as the professor states) it would be too difficult to test players on all of its island nations. Aussie players out there might feel so awkward playing this game. As a game, Topoloco is only fun when the information you learn from it actually serves a purpose, maybe on trivia night when you’re the only one that knows the capital of Suriname. But even then, you’ll realize the game itself isn’t much fun.

I went into Topoloco with hopes that it would be a great guide for learning all about the world’s countries – a pocket atlas, if you would. Unfortunately, the game fails to provide even a simple list of all the world’s countries nor does it give you the option to search and look up a country by its name. Instead, the Topoloco’s cumbersome atlas is the only reference guide you’ll get. But what if you don’t know where Azerbaijan is and want to find out its capital? Tough luck. You’ll need to play through random practice questions and hope it pops up. Or you could buy a real atlas, even a small pocket one, because, unlike the game, it might give you a lot more for your money.