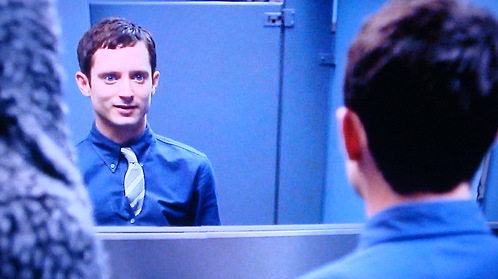 Sexy and I know it.

The new episode of Wilfred opens up with Ryan at work, preparing to leave for the day. He notices an invitation from his dad for some fancy-shmancy black tie affair. He goes to check no, but hesitates. Amanda comes in (On a side note: Alison Mack is so hot. Like, insanely so. And that hair? Amazing.) and starts talking about their date when Ryan’s boss, Jeremy (played by the always wonderful Steven Weber) enters and gives him a new assignment, one that effectively keeps Ryan at work late and cancels his date with Amanda (damn it!).

Wilfred calls and tries to talk, but Ryan’s not into the conversation, especially when it turns to the topic of what he had for lunch and what his farts smelled like. Wilfred is a little lonely, I think. We find out that Jenna and Drew are away for a few weeks. (Am I the only one thinking they might come back married?) Ryan tells Wilfred that he’s got another assignment to work on and doesn’t have time to talk. Wilfred tells him he needs to stand up to his boss.

Ryan decides to crate Wilfred for trashing his house, which we saw occur during their phone conversation. Wilfred begs to go to work with Ryan, claiming that he’s a social dog. Ryan caves, per usual. I’m sure this will go along well.

The employees end up loving him, although I don’t think that will last long. Amanda, not so much. I can’t wait to see why. Ryan’s boss comes in upset about the traffic he hit coming into work. Not good. At least that’s what we’re led to believe. He sees Wilfred and almost seems to have a fit, but instead decides to cuddle with Wilfred. Awkwardly cuddle. Wilfred isn’t really thrilled. However, he manages to get Ryan an extension on his new assignment.

Wilfred is talking to the birds while Ryan’s on a date with Amanda. Yay! A cute conversation ensues and we find out that Amanda’s birthday is coming up. Ryan offers to take her out to dinner. Yeah, that’s not going to be an issue later.

Ryan is in his office and  looks at the invitation he received from his dad. He hears Wilfred outside and goes to see what he’s up to. It turns out the employees are tired of Wilfred being in the workplace—surprise, surprise. Ryan sends Wilfred to his office and Wilfred is upset, because he feels like he’s losing his touch. Ryan clearly doesn’t care and mocks him, earning a “Suck my dick, Ryan.” as a retort. Ryan tells Wilfred to lighten up, which doesn’t help. Wilfred gets some hair-brained idea and since it’s Wilfred, you can’t help but just think ‘Oh god, what is he going to do now?’ and, judging by the look on his face, that’s exactly what Ryan is thinking.

Wilfred announces his plan to everyone (like they can understand him). His big plan? Running to the break room that involves taking a sharp turn. Time out for just a minute. If you’ve ever spent any time with a dog, you know that they have a hard time on smooth surfaces, since there’s no traction. See where this is going? Wilfred (seemingly sliding on purpose) ends up knocking over the water cooler, aggravating everyone but him. (It’s cute on You Tube, Wilfred, with puppies. Sorry.) Jeremy shows up to find out what the racket is about. He’s annoyed that a competing company is…well… competing. That extension Ryan got? All gone. He wants the report from Ryan tomorrow. This new decision (tada!) interferes with Ryan taking Amanda out for her birthday.

Wilfred comes into the basement and tells Ryan he’s not going to be an office dog anymore. Ryan tries to convince him not to, because he wants another extension so that he can still go out with Amanda. Wilfred tells him this whole situation is about his father and Ryan not standing his ground. Ryan tries to brush that off and tells Wilfred he’s going to the office whether he wants to or not. Wilfred agrees, but only if Ryan helps him come up with another “adorable act” to perform.

While Ryan’s trying to finish his report, Wilfred is trying to come up with something cute to do at the office. He gets mad that Ryan isn’t trying to help him. When Ryan suggests the droopy dog eyes, Wilfred scoffs, “That shit is so hack.” after pointing out that Lassie did that in the 1950s. Wilfred announces that Bear has a pitch! Maybe Ryan’s saved? Nope. Not so much. Wilfred isn’t impressed with Bear’s pitch and Ryan asks him to please just pick something (bad idea). Wilfred checks up on what Bear’s typed out and it turns out that Bear was only typing h’s, which causes Wilfred to freak out. “I can’t even look at you right now,” Wilfred exclaims and puts a bag—a sex bag—over Bear’s head. (I don’t even want to know what a sex bag is. Some things are just better left alone.) Wilfred gets another brilliant idea: “Bag on my head and I can’t get it off!”

Ryan goes into Jeremy’s office with Wilfred the next day, hoping to get another extension on his report. Wilfred ditches him for the rest of the employees so he can show them his new act. Wilfred’s act gets interrupted by Ricky, the janitor, who is a little on the slow side. Wilfred is pissed, to say the least. He goes as far as attacking him in the bathroom. Yikes. Being cute is serious business for Wilfred.

Ryan is trying to calm Ricky down. “Don’t worry pretty boy. You still got your quick wit.” Wilfred comments from a stall when Ricky sees himself in the mirror and notes the wound on his cheek. Ricky tells Ryan he’ll forget about Wilfred attacking him if Ryan does his job. So now, Ryan’s been reduced to cleaning toilets. Wilfred tells him that he needs to start standing up for himself and stop being a “human doormat.” Ryan snaps at him and tells Wilfred that this is his fault. Nuh-uh. Wilfred isn’t tolerating that for a second. It goes back to his dad, again…breakthrough time! Wilfred helps Ryan realize that he really does need to stand up to people, especially his dad.

Ryan starts with his boss, telling Jeremy that he has a date tonight and while he’ll gladly work his ass off, they have to set some limits. He’ll have the report by Monday. Jeremy agrees, barely letting Ryan finish.

Ryan and Wilfred head back to Ryan’s office, where Ryan checks off the ‘Decline’ box on the invitation he received from his dad. Wilfred’s proud of him and decides to tell Jeremy off. Ryan and Wilfred run in on Ricky (seemingly) going down on Jeremy, or preparing to. Um. Okay. Didn’t see that coming. Ryan asks if it’s possible for him to take the next week off (implying that to say ‘no’ would be a bad idea) and Jeremy tells him that’s very possible.

In the last scene of the night, we discover that Wilfred doesn’t believe that the world is round. He wants to know why the Chinese just don’t fall off the Earth. He figures they have magnets in their shoes. Ryan tells him it’s gravity.

Tonight’s episode, outside of the comedy, was great. Especially for people who might allow themselves to be walked all over a little too much. Sometimes, it’s good to just put your foot down and say ‘no’. That said, I’d like to see Ryan do that with Wilfred a bit more. Even though Wilfred does help, in his own twisted way, seeing Ryan fend for himself completely would make a good episode. There have been previous episodes where Ryan’s come close, but he always chooses Wilfred in the end.