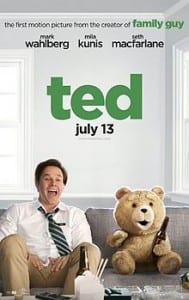 The night that “Ted” and the new Tyler Perry movie were released, I saw the former. I found myself stuck in a theatre with a bunch of college-aged white trash, listening to them laugh at the film’s lazy jokes and the trailer fodder. About 45 minutes into the movie, I was tempted to sneak into the Tyler Perry screening.

“Ted” is Seth Macfarlane’s attempt to launch himself (and his voice acting troupe) onto the silver screen.  Marketed on Macfarlane’s voice acting talents, a popular cast, and a Family Guy sense of humor, this film ultimately relies on the Fox-famed animator’s flare to make it the best raunchy comedy of the summer.

Unfortunately, it’s not. It’s a lazy, pathetic film that has nothing outside its premise.

As the story goes, a lonely boy named John (Mark Wahlberg) gets a teddy bear on Christmas morning and names it Ted (voiced by Macfarlane).  Friendless John wishes that the bear would come to life – and it does, becoming an overnight sensation.

27 years later his fame is gone, but he and John are still best friends. John is a loser with a dead-end job and spends all his time getting high. He does have a nice girlfriend, Lori (Mila Kunis) who, four years in, is ready to have a more serious relationship. She believes that Ted is the source of her boyfriend’s behavioral and responsibility problems.

While the writing has its highlights, the plot itself is the most shameless rip-off of every romantic comedy I have ever seen. It is frustratingly predictable, and it keeps the audience waiting for a surprise that never comes.

The film’s biggest problem is that John is just not likable. It can be overlooked in the beginning, as John is just a little irresponsible and Lori stays with him – she belies that he has a good heart, despite being total loser. All of this could work, in theory, but the longer the film goes on, the more the setup comes crashing in on itself. The man is 35 years old but acts half his age, and whenever he does something stupid he blames everyone else. The audience’s ability to suspend disbelief evaporates frighteningly fast.

There is one good scene where Ted calls John out for this behavior, but John just ignores it. He doesn’t understand that it’s his job to say no, and to just break the connection. Asking the audience to accept that from an adult is just insulting.

Ted himself has the best lines in the film, but ultimately the character is a another lazy stoner like those so popular in MacFarlane’s animated shows.  Unfortunately, there is none of the personality that makes those others, like Family Guy’s Stewie or American Dad’s Roger, work. He’s simply a pothead bear with a voice a la Family Guy’s Peter or Brian Griffin: while funny in concept, in practice the character is just a carbon copy of something out of a Herald and Kumar movie.

Ted definitely has his moments, but he doesn’t have the presence to carry the whole film –  and he has to, because Mark Wahlberg does nothing but weigh this movie down.

The Family Guy formula is in full effect. The characters rattle off jokes that the audience is almost guaranteed to laugh at, and do so with glossy How I Met Your Mother presentation. Even the characters seem to be based on the latter’s Barney, Marshall and Robin.

“Ted” is a crowd pleaser, make no mistake. The constant jokes will eventually make you laugh, even if you have to wait an hour for it.  The humor ranges from that of MacFarlane’s shows to a CBS sitcom, and it absolutely produces some laugh out loud moments. Every time I laughed, I laughed hard. That said, I didn’t do that very often.

With humor only earning minor praise, an incompetent protagonist, mediocre writing, and a horrible ending, this film didn’t leave me laughing- I left angry.

If you need to see “Ted”, rent it. Mr. Macfarlane, I appreciate what you attempted, but please go back to American Dad and releasing jazz albums.