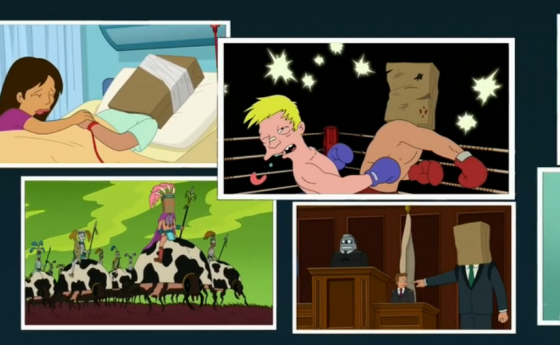 A showcase of the critically acclaimed performances by Langdon Cobb, the fictional actor appearing in “Baghead.”

“The Thief of Baghead” was the perfect demonstration of just how bizarre “Futurama” can be, featuring acclaimed actor Langdon Cobb, who constantly wears a bag on his head and whose actual facial features have the ability to suck the life force out of any poor soul who gazes upon them. When Cobb sucks the life forces out of the Planet Express gang, Bender has to step in rescue his friends.

“Baghead” begins with a return to the daytime soap opera staple “All My Circuits”, which features an all-robot cast.  The cast is lead by the legendary robotic actor Calculon, who offers up the gem of a line: “Someone in this room is a murderer! (gasp of shock from the rest of the cast) It’s me.” As the Planet Express crew watches the show, Bender makes it clear that he’s Calculon’s biggest fan.

So far this new season of “Futurama” has slowly been bringing all of the classic characters and jokes from previous seasons back into action, and it was a joy to see the return of Calculon and “All My Circuits”.  There are so many long-running gags on the show, and this is certainly one of the best. Also, Calculon’s line about the murderer being him captures both the wittiness of the “Futurama” writers and a satire of soap operas in general. 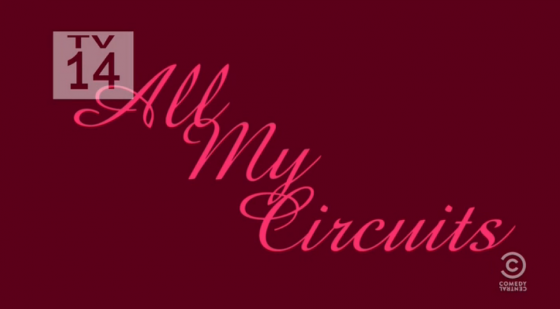 Finally, the return of “All My Circuits”

After watching the latest “All My Circuits,” the group decides to go on a trip to the aquarium, where a sign boasts that “August is Shark Week!”  In an amusing “Futurama” twist, the tanks at the aquarium use gravity fields to keep the water in the tanks instead of glass, meaning you can reach right into the water. Fry, like the man-boy he is, asks Leela if he can touch the water, to which Leela replies, “I wouldn’t. But I’m smart.”

It’s always been fun to see Fry acting as a little kid because it often satisfies the inner child in all of us.  Though Leela regards Fry’s interest in touching the fish tank water as stupid, who wouldn’t want to do that?  You know that if you were introduced to such a bizarre concept, the first thing you’d want to do would be to reach out and stick your hand in.  Many times Fry’s idiocies are just that, but occasionally he’s simply voicing something childish that the audience is thinking too.

At the aquarium, Bender asks to take a photo of everybody in front of one of the tanks.  The process takes forever, because he’s using a film camera rather than a digital one.  The film/digital debate between Bender and Hermes is hilarious, especially since digital has been around for “a thousand years” according to Hermes.  But Bender insists that, “no digital camera can capture the warmth and grain of good old film.”  He even has his own darkroom, which of course can be found inside his robotic torso.  This little banter makes you stop for a second and actually wonder just how much longer the film/digital conflict will be relevant. Will there be die-hard film buffs, even in the 3000’s?

While Bender is getting ready to take the photo, Calculon walks by, which sets Bender off on a fanboy frenzy of trying to snap a zillion photos of his favorite actor. When Bender shows the photos he took to Zoidberg, he recommends that Bender take the photos to his favorite celebrity gossip source—Us People Magazine.  Bender doesn’t think his photos are that good, but Zoidberg insists that, “You shouldn’t be too hard on yourself, robot.”  It’s worth mentioning how Zoiberg comically pronounces it “robutt” rather than “robot”.  It’s these little things that give “Futurama” a very subtle sense of humor that can be easily missed.

It doesn’t take long for Bender to take Zoidberg up on his recommendation, and the managing editor—Larvae Levin—loves his Calculon photos. Levin tells him that he could be Us People’s new paparazzo, which Bender becomes interested in at the mention of getting paid. The fact that the managing editor of a gossip magazine is essentially I giant maggot-like larvae is just hysterical and really exemplifies what the future-setting of the show allows Matt Groening and his writers to do.  It’s gags like this that set Futurama apart from Groening’s “The Simpsons” and other similar shows like “Family Guy” or “South Park.” Maggoty managing editors is what keeps “Futurama” fans coming back.

As Bender pursues his new career as a paparazzo for “The Magazine More Women Deny Reading,” he fakes scandalous photos with a variety of celebrities (most notably, the robot Parts Hilton). But his new challenge arises when he walks in on Zoiberg watching a TV special about an actor named Langdon Cobb. Cobb is a heavily awarded and critically praised actor who has never been seen without a brown paper bag over his head.  Bender vows to get a photo of Cobb’s bag-less face for Us People Magazine, exclaiming, “Once again, television has given me a reason to live!”

Just for a second, let’s go back to the US People Magazine sign that read, “The Magazine More Women Deny Reading,” because it brings up the fact that “Futurama” has always made excellent use of its signs.  It would be easy to put together a lengthy (and hilarious) coffee table book that catalogued all of the funny signs that the show has featured over its six-season run. And in “The Thief of Baghead” there are more additions to the library, with the aforementioned Shark Week sign at the aquarium and now this Us People sign.  Signs aren’t typically though of as being a source of comedy, but “Futurama” breaks that mold with almost every episode.

Bender sneaks into Langdon Cobb’s mansion and waits to snap a photo from the actor’s lit fire place.  Sure enough, Cobb removes his paper bag in the privacy of his own home, and Bender gets the shot. But Cobb begs Bender to delete the photo, insisting that spreading his photo around will cause terrible things to happen.  Bender refuses to get rid of the photo and heads back to the Planet Express headquarters.

At home, Bender shows Langdon Cobb’s unmasked photo to Fry.  His face immediately erupts with green beams that shoot out of his eyes and mouth and his body crumples into a hollow husk on the ground.  Bender then shows Amy and Hermes with similar results, but before he can show Zoidberg the photo, Professor Farnsworth steps in and rips the photo up.  The remaining Planet Express crew comes up with a plan to destroy Cobb’s ego, which will release Fry, Amy, and Hermes’ life energies back into their empty husks of bodies.  The idea is Zoidberg’s, but nobody seems thankful, and Bender even comments, “Quiet Zoidberg!  God, I wish you were a husk!” 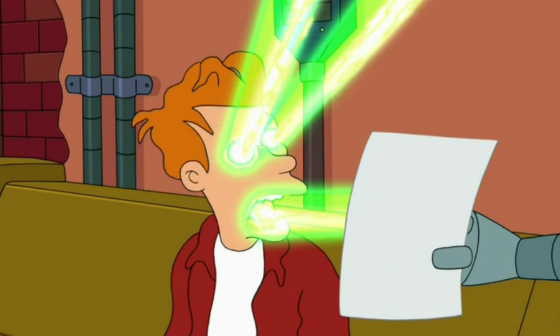 Fry gets his life force sucked out by looking at Bender’s photo of Langdon Cobb’s bag-less face.

Poor Zoidberg is always getting picked on.  It seems that every show has that one character that every other character hates on (like Meg in “Family Guy”), and Zoidberg is the scapegoat here. This long-running joke can lead to some great comedy, but sometimes you can’t help but feel bad for Zoidberg being the butt of everyone’s jokes.   The lobster had a great idea this time around, so give the shellfish some credit for once!

Bender and Leela ask Calculon to help them set up Langdon Cobb’s demise. He agrees to challenge Cobb in an acting competition to finally decide who the better actor is. While Calculon out-performs Cobb, Zoiberg and Farnsworth plan to destroy his ego, which takes the form of a mushroom-like mutant dog that lives outside his mansion.  Unfortunately, Calculon’s ultimate performance, in which he actually does kill himself on stage by drinking toxic food-coloring, does nothing to impede Cobb’s ego. In fact, Cobb still wins the acting faceoff, and as a result his ego mutant dog grows to epic proportions.

Cobb’s ego smashes into the theater where the competition is being held and apprehends Leela, Farnsworth and Zoiberg.  Cobb then forces the three of them to look at his bag-less face, which sucks their life forces out of them.  Now it’s up to Bender to save the day.  He makes a new photo of Cobb from the film negative (a brilliant way to bring the film/digital reference full circle) and shows the picture to Cobb himself.  But the photo doesn’t suck Cobb’s life force out at all.  Instead, it further boosts his ego to the point where his ego-mutant-dog grows so huge that it explodes.  The ego’s destruction releases the Planet Express crew’s life energies back into their bodies. Leela points out at the end that for once, Bender was actually the one who saved the day! 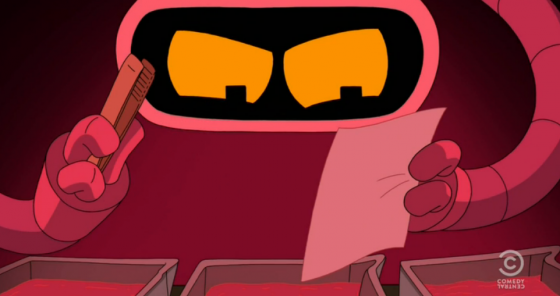 Bender uses his internal darkroom to develop a new photo.

“The Thief of Baghead” wasn’t an instant-classic, but it was a vast improvement over last week’s “Decision 3012.”  There weren’t any real gut-busting laughs in “Baghead,” but the show really got back to the utterly bizarre and unique material that sets it apart from the rest of the animated comedy crowd.  The whole bit about Cobb’s ego taking the form of a green, mutant-dog type of creature was classic “Futurama” absurdity. Plus, the return of Calculon and “All My Circuits” was an added bonus. Overall, “The Thief of Baghead” wasn’t the funniest episode ever, but it got back to the signature “Futurama” brand of comedy, which was much appreciated.