Many historical and fascinating ships will be available for people to visit in Boston this week thanks to Boston Harborfest, Navy Week, War of 1812 celebrations and OpSail Boston. Between June 28 and July 6 almost two dozen ships will dock in Boston. Below is a list of  the naval and tall ships that you don’t want to miss: 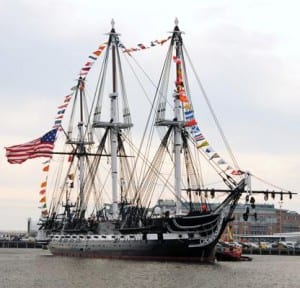 The USS Constitution is the oldest warship in the world that can still be found on the water. First launched in October of 1797, the ship was built in Boston at Hartt’s Shipyard. George Washington commissioned the ship and in 1812 it successfully defeated four British warships earning the nickname “Old Ironsides.” The ship was restored in 1927. The USS Constitution will be at Pier 1 Charlestown Navy Yard June 28 – July 5.

The USCG Eagle is a training ship for the US Coast Guard Academy in New London, Conn.  The USS Constitution is the only other active US military sailing ships. It was originally a training ship for the German Navy and Adolf Hitler was present at its launch. In 1945, the ship was transferred to the US as part of war reparations. You can visit the ship June 30 – July 3 at the Charlestown Navy Yard.

HMCS Goose Bay and HMCS Summerside are responsible for coastal surveillance and patrol. The ships are flexible, meaning that interchangeable modular payloads can be adjusted for route survey, bottom object inspection and minesweeping. The crews are mainly composed of Canadian Naval Reservists. Goose Bay will only be at the Charleston Navy Yard July 1 and July 2 and Summerside will be at USCG Base June 30 and July 1.

Like the other HMCS ships, the HMCS Moncton  and HMCS Kingston also focus primarily on coastal surveillance and patrol. This includes security patrols, search and rescue, law enforcement, resource protection and fisheries patrols. Moncton will make a short appearance at the Coast Guard Station July 1 and July 2 and you can visit Kingston June 30 and July 1 in the Charlestown Navy Yard, Pier 2.

The USCGS Marcus Hanna is based in Portland, Maine. It is responsible for maintaining buoys and other aids to navigation, conducting search and rescue missions and other law enforcement duties. The is named after a heroic lighthouse keeper who saved two sailors shipwrecked near his lighthouse. Check out this ship June 30 to July 1 at the USCG Base.

HNoMS Thor Heyerdahl received its name from the famous Norwegian adventurer and explorer. It is the newest of five warships in its class and is extensively equipped for anti-submarine and air defense responsibilities. June 30 – July 4 find it in the Charlestown Navy Yard, Pier 4. 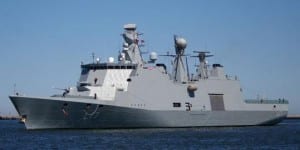 HDMS Esbern Snare is currently the largest combat vessel in the Royal Danish Navy. Until earlier 2012, it was the flagship for NATO’s counter-piracy Operation Ocean Shield near Somalia. Although the ship is primarily designed for command and support functions, opposed to combat, it encountered battles with Somali pirates in 2011. Visit the ship June 30 – July 4 in the Charlestown Navy Yard, Pier 4.

NOAA Thomas Jefferson is owned and operated by the National Oceanic and Atmospheric Administration and operates along the Atlantic and Gulf coasts. High-tech sonar is used on the ship to conduct hydrographic surveys, used to update nautical charts that are important for the safety of various vessels. The ship will be in Boston June 30 – July 4 at the Charlestown Navy Yard, Pier 4.

USCGC Juniper is the lead ship of the US Coast Guard’s seagoing buoy tenders. Other than overseeing navigational buoys, the ship’s responsibilities include law enforcement, search and rescue and ice breaking. It also skims and recovers oil if there is a spill. The ship participated in the recovery of bodies and debris after the TWA Flight 800 and Egypt Air 990 crashes. It was also included in antiterrorist operations in New York after the September 11 World Trade Center attack. Take time to visit Juniper June 30 – July 4 at the Charlestown Navy Yard, Pier 4.

Cisne Branco means “White Swan” and  is the training vessel for officers and cadets from the Brazilian Navy and Merchant Marine Academy. Commissioned on March 9, 2000, it represents Brazil in maritime events  worldwide. Go to Fish Pier Massport between June 30 and July 5 to see this ship.

Built in Spain in 1976, BAE Guayas was named in honor of Chief Guayas, the Guayas river and Guayas steamboat. The steamboat was the first built in South America and is displayed on the Ecuadorian coat of arms. BAE Guayas teaches practical seamanship and navigation skills to naval cadets at the Ecuadorian Naval Academy. It will be at Fish Pier Massport June 30 through July 5.

The ARC Gloria is the official flagship of the Colombian Navy. It was commissioned in 1968 as a sail-training ship and currently represents Colombia at maritime festivals. The national flag on the ship is the largest carried by any vessel and it takes six people to raise it. The ship’s figurehead is coated in glittering gold-leaf and is called Maria Salud, reputedly after the sculptor’s daughter. Check it out at Fish Pier Massport June 30 – July 5.

The KRI Dewaruci is the largest tall ship in the Indonesian Navy and is used as a sail-training vessel for naval cadets. It is a goodwill ambassador for Indonesia to the world. The ship started to be built in 1932, but World War II suspended construction. Construction was completed in 1952 and the ship launched in 1953. It is based out of Surabaya on the Java Sea. Dewaruci will become a naval museum when a replacement ship is completed in 2014. The current ship will be at Fish Pier Massport June 30 through July 5. 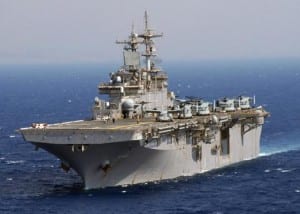 USS Wasp is the 10th Navy ship with this name. It supports Marine amphibious landings and was among the first ships designed to accommodate modern hovercraft landing crafts and Harrier II Vertical/Short Take-Off and Landing jets. Any of the helicopters used by the Navy and Marine Corps can land on this ship. You can find the ship at North Jetty Massport June 30 through July 5.

USS Gravley is named after Vice Admiral Samuel L. Gravely Jr., the first African-American officer commissioned from the Navy ROTC. It completed sea trials in June 2010 and is therefore one of the Navy’s newest vessels. Visit the ship at Black Falcon Terminal June 30 – July 5.

The FGS Hessen and its two sister ships are Germany’s most advanced air-defense warships. They have enhanced stealth features designed to deceive an opponent’s radar and acoustic sensors. It operated as part of an American carrier strike group in the Mediterranean in 2010. Between June 30 and July 5 the ship will be at Black Falcon Terminal.

HMCS Preserver carries the oil and supplies to refill ships and helicopters at sea. It’s the largest vessel in the Canadian Navy’s East Coast fleet. The Preserver was damaged when it hit a floating dock last November. It has been in the Persian Gulf, and took part in NATO or UN forces during conflicts in Haiti, Somalia and the Balkans. The ship also participated in disaster relief operations in Haiti and Florida, and the recovery effort following the crash of Swissair Flight 111 off Halifax in 1998. Go to Black Falcon Terminal June 30 – July 4 to visit the ship.

HMCS Iroquois has been on missions throughout the Atlantic and Indian oceans, including the blockade of Yugoslavia in 1993-94. It has been part of antiterrorism operations in the Persian Gulf, the Gulf of Oman, and the Arabian Sea. The ship has traveled the equivalent of more than 16 times around the world. You can find Iroquois at Black Falcon Terminal June 30 – July 4. 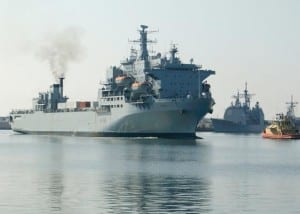 The RFA Argus is a part of the Royal Fleet Auxiliary, which is a civilian-manned branch of Britain’s Royal Navy. The ship was originally an Italian-built container ship, but it was requisitioned in 1982 for service in the Falklands War. It was purchased by the Royal Navy in 1984 and used to train helicopter pilots. In addition to many missions in the Middle East, it has supported British troops in Bosnia and Kosovo and off the coast of Sierra Leone. The Argus is currently on the Royal Navy’s Humanitarian and Disaster Relief Team, stationed off North America to help during hurricane season. Be sure to visit this ship at Black Falcon Terminal June 30 – July 4.