Final Fantasy X was the first game in the series I ever played. Needless to say, it was my introduction into the series and gave me a small taste of all the wonderful music the games were known for. Whenever I listen to songs like “Suteki Da Ne” or “To Zanarkand,” I feel nostalgic, and this same feeling is perhaps one of the reasons why may fans get dizzy whenever they hear remixes of “One Winged Angel” even today. Music has that power over our emotions, and the Final Fantasy games, with their unique stories and soundtracks, have been taking us on sensory journeys for twenty-five years.

Square Enix knows how much its fans love hearing certain Final Fantasy songs over and over again, so what better way to celebrate the franchise’s 25th year anniversary than by making a rhythm game out of all those tracks? The Final Fantasy games are known for being deep and engaging RPGs, so while Theatrhythm Final Fantasy tries to provide players with some of these elements, its iconic music and effective rhythm game mechanics, something the series surprisingly isn’t known for, are what truly make it shine.

Spanning thirteen video games, Theatrhythm lets players relive each Final Fantasy through three distinct rhythm stages that play songs associated with that particular game. Theatrhythm may have a relatively weak plot compared to what the franchise is known for, but this just serves as an excuse to get everyone’s favorite characters together in one game. Its chibi-esque design style serves to unify all of the thirteen games and reiterates on its lightheartedness.  Each stage utilizes similar controls that require you to simply tap a trigger that appears on screen, tap and hold it, or tap and slide it in one of eight different directions. Controls couldn’t be any simpler, but I often found that my taps didn’t register correctly, especially when I had to slide my stylus across the screen. 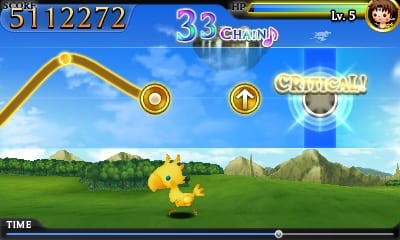 The three stages include Field Music Stages, Battle Music Stages, and Event Music Stages that differ in how the triggers are displayed on screen, what your characters are doing while you’re playing, and what type of music you’ll be hearing. Field stages feature side-scrolling triggers that require you to hold and follow their path with your stylus as your characters gallivant across fields with the hopes of discovering rare items. Battle stages are just that and include the same side-scrolling triggers without the hassle of having to follow their paths with your stylus. Finally, Event stages feature triggers appearing from all sides of the screen and showcase pivotal points in the games such as FMV cut-scenes. There are also optional Opening and Ending stages that simply require you to tap when notes reach a crystal in the center of the screen. Their main purpose is to give players a quick look at each game’s plot and to get easy Rhythmia points, one of the many types of things the game will have you accumulating.

As you play through each stage, your characters will be busy at work either running through endless plains or battling their games’ final bosses. Your party will always consist of four characters and your performance on each song determines how much experience points they get or even what types of items they will run into. Make too many mistakes and your characters will lose HP and fail the stage. Each stage you clear, (even the optional ones), will increase your Rhythmia score and unlock additional modes, characters, and achievements – and trust me, there seems to be no end to how much Rhythmia you can accumulate.

Square Enix incorporated their tried-and-true RPG elements into the game, so you will notice characters leveling up and learning new abilities that help the party stay alive and defeat more enemies in a short amount of time. Higher leveled characters can simply walk further or defeat more enemies, so who you select has no actual bearing on your performance on a song. A character with high agility can walk further in the Field stages and a party high in Luck has a higher chance of getting rare items after battles, but what you ultimately get from all these RPG touches are just items that you might not even end up using. There are plenty of goodies to unlock, but you’ll wonder if it’s all worth it when all you’ll really want to you do is get the best score possible on each song, something that can be done without the help of items or abilities. 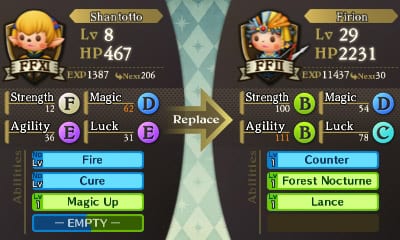 Once a song has been completed in the game’s main Series mode, which involves playing through five consecutive songs from each of the thirteen games, it will then be available at a higher difficulty in Challenge mode. Theatrhythm is a rhythm game after all, and the higher difficulty levels really showcase how simple triggers can be combined in a way that truly tests your reflexes. Some songs are very difficult to master, especially the energy-infused battle theme songs, but a perfect score will bring players back for more.

Additionally, the game’s Chaos Shrine mode features playing through different Dark Notes, sets of Field and Battle stages that are randomly generated in different difficulties. Not only will a song’s triggers be laid out differently, but you won’t know what songs are in each Dark Note until you start playing. Songs not present in Series mode will show up from time to time and the main draw of discovering and clearing all the Dark Notes is to get more items, collectible cards, and crystal shards to unlock additional characters. Your favorite Dark Notes can also be given to others via Street Pass. 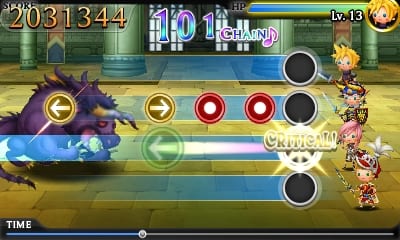 Theatrhythm is the perfect playable anthology for anyone who has played one or all thirteen Final Fantasy titles featured in the game. Characters make comments here and there that only someone who has played their games will understand, and the cut-scenes that play through the Event stages will let fans reminisce. The game even features a music player that lets players listen to their favorite songs even when the 3DS is closed. Theatrhythm was made for fans, and it shows.

Not all the songs make sense to include in a rhythm game (especially the slower, more obscure ones), but the majority of the game’s selection of songs is video game music at its finest. The RPG elements in the game could have either been left out, or they could have expanded upon even further without simply focusing on the repetitive act of acquiring items, which are great if they serve a purpose other than using them to simply get more. Regardless of its flaws, Theatrhythm Final Fantasy is a great rhythm game and a perfect way to celebrate the anniversary of a series that has given us so many years of musical memories.