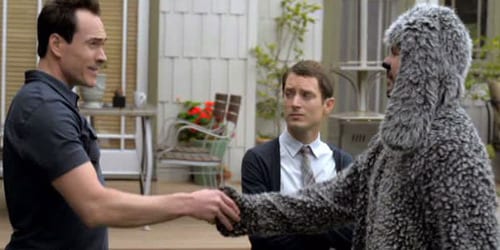 Drew and Wilfred playing catch while Ryan watches. It doesn’t look nearly as funny as it was.

I have a little confession to make: I have not watched season 1 of Wilfred. So why am I reviewing the season 2 premiere, you ask? Part of it is so that I can have an excuse to watch Louie (the channel is already on and I’m still awake, so why not, right?) but mostly it’s because I want to. I’ve wanted to watch Wilfred since it premiered a year ago, I just haven’t gotten around to it. I could give you a list of reasons/excuses, but I don’t want to bore you. That’s not what you’re here to read.

So I went in with a vague understanding of what Wilfred is all about. I know Elijah Wood (sexy, sexy Elijah Wood) is in it and that he’s not playing Wilfred. I know that Wilfred is a dog. I also know the show airs on FX.

Sadly, that’s about it. I walked in completely blind with few expectations.

I was pleasantly surprised! I started off incredibly confused. I didn’t know names, so it took me a few minutes to understand who was who. Once I understood who the major players were, it was relatively easy to follow the plot.

The premiere opens up with Ryan (Elijah Wood) walking up to Jenna’s house. I don’t know much about this Jenna character, but I picked up a couple things. One, it’s pretty clear that Ryan is hopelessly in love with her, judging by the depressed look on his face when he notices her engagement ring. Two, she’s Wilfred’s owner (be in awe of my detective skills!). She seems glad to see Ryan and invites him inside.

A bubbly and obnoxious Drew (was I the only one who didn’t know Chris Klein was still acting?) greets Ryan. It’s obvious that Ryan doesn’t really want to see or deal with Drew, but he puts on a good face in front of Jenna. In walks Wilfred, who refuses to acknowledge Ryan’s presence. Ryan’s hurt by that turn of events. I can tell something else is going on, but I really can’t put my finger on it. I’m missing something and that has to do with not watching the first season. Strike one against me.

In the yard, Drew and Wilfred are playing catch. Drew confesses to Ryan that he and Jenna are having a few issues after she found illegal steroids in his suitcase. In this scene, it becomes clear that Wilfred is acting a certain way in order to get Drew’s attention and acceptance. Drew eventually goes inside after Jenna yells at him, leaving Ryan and Wilfred alone.

Ryan seems to think that Wilfred can’t remember him after the car accident that Wilfred was involved in. Wilfred explains that he remembers him just fine. Ryan tries to talk about Jenna and Drew, but Wilfred isn’t having any of it. He’s tired of their friendship being one-sided and he’s been getting along with Drew since Drew was the one to help him after the car accident. Ryan tells Wilfred that he needs him, but Wilfred says he doesn’t need Ryan. Things are a lot clearer to me now that I have a better sense of what I missed. I really have to watch the first season.

Ryan is at work when Amanda (I don’t know if she is his boss or his co-worker, strike two against me) comes in and asks him out to lunch. He turns her down, and she launches into an adorable and quirky rant about how he should be attracted to her and should want to go out with her. I’ve watched this show for 10 minutes and I completely agree with her.

Ryan heads home (I’m assuming, strike three?) and sees Jenna at her car. They chit chat and Ryan tells some pretty lame jokes. “Mustard stains are the new black.” Awful. (But it’s coming from Elijah Wood, so I guess he can get a pass. Just this once. Okay, maybe twice.) Jenna hints that things are bad between her and Drew, and Ryan (being the genius that he clearly is…not) suggests that she calls the engagement/relationship off. Of course, Jenna doesn’t like that idea (nobody likes the idea of a long-term relationship coming to an end, especially if you’re already upset), so Ryan claims it was just a joke. He definitely needs some help in the woman department. Somebody give this guy a book on the right and wrong things to say to a lady.

Wilfred is running along a beach and Ryan jogs up, attempting to make small talk with the fuzzy companion. The small talk consists of Drew and Jenna, which Wilfred avoids talking about. He tells Ryan that this friendship needs to be less one-sided. It can’t just be about Ryan’s problems. He points out a guy with his dog, basically saying that they need to be like that. A “You scratch my back, I scratch yours” kind of situation.

They go over and while Ryan talks to the guy, Wilfred talks to the dog, Jelly Beans. They discover that Jelly Beans is training for a dog challenge. Wilfred wants to enter in order to impress Drew, but knows that Jenna would never let Drew enter him. Ryan offers to enter and train him, but Wilfred says he’s only doing that so he can get advice on his Jenna problem. The two decide to make a deal: Wilfred will give Ryan advice if Ryan will help him with the dog challenge.

Later, Ryan finds Wilfred downstairs watching film on a training session they had. He tries to broach the Jenna situation, but Wilfred is completely focused on the video. He tries to convince Ryan to sabotage Jelly Beans by pouring flesh-eating bacteria on the dog’s legs (and genitals, of course) before the show. Ryan balks and Wilfred calls the deal off, until Ryan suggests using drugs to help. Wilfred refuses to use anything over the counter. He wants the good stuff. The kind you get in a dirty alley. You know, the illegal ones.

The next scene is the best scene in the entire episode. I’ll get to why in a minute.

Ryan and Wilfred find a guy weightlifting and Wilfred coaxes Ryan into asking him where he can find steroids. The guy doesn’t want to help. Another gentleman (hah!) approaches the duo from behind, informing them that he thinks he knows what they’re looking for. The dealer takes them toward a back alley of sorts and makes it clear that he wants a sexual favor performed in exchange for the drugs. Ryan denies him and attempts to walk away, only to have Wilfred follow and call him a “selfish prick.” Again. Ryan, clearly annoyed with Wilfred’s insults, makes a deal with the guy. He’ll pay cash and only cash. No sexual favors. The guy agrees, but only if they share a long hug as well. “I want it to be tender, like we’re sisters at a funeral.”

And cue the best scene of the night! I struggled to find a picture (or even a GIF) of this hug, but I failed. I apologize for my lack of internet skills. You’ll have to suffer through my poor verbal description.

Ryan agrees to the hug and awkwardly wraps his arms around the dealer. They stand like that for a few minutes. The dealer is loving the hug a bit too much, going as far as stating that he can feel Ryan’s heart beating. Let me put it to you this way. You remember that extremely awkward moment that you just wanted to end, but it felt like forever? Yeah, that’s what that hug was.

Stepping away from the hug, we’re taken to the day of the dog challenge/show and we find out that Jenna and Drew are a-okay now, thanks to Ryan taking care of Wilfred thus leaving them alone. Poor Ryan. (I’d like to take the opportunity here to point out that there is a much more attractive and available young woman by the name of Amanda who wouldn’t mind going out with Ryan and I think he needs to wake up and get over Jenna.) Ryan goes over to Wilfred, who is kind of nervous and antsy. He asks for the pills. Ryan’s conscience finally gets the better of him and he throws the pills away, telling Wilfred that he’d rather let him go than to see him get hurt. Ding ding ding! The solution to Ryan’s Jenna problem. The best part? Ryan seems to understand that that’s the advice he’s been looking for—time to let go of Jenna and let her live her life.

Ryan clips a leash onto Wilfred, who does not seem to appreciate that at all. He starts going crazy and when Ryan removes the leash, Wilfred proceeds to tear apart the obstacle course. He even goes as far as urinating on it. Just as he’s about to attack Jelly Beans, Ryan stops him.

After, Wilfred attempts to show Drew the green ribbon he got for participating, but Drew’s not interested since Wilfred didn’t win the whole thing. Finally fed up with trying to appease the bastard, Wilfred shows Ryan a bottle of pills and instructs him to hide the bottle in Drew’s suitcase, which will lead to Jenna kicking him out after they’re found.

In the last scene of the episode, Ryan tells Wilfred that he asked Amanda out to dinner (finally!) and she said yes. Wilfred is happy for him, but it’s reminded him of an old relationship of his…one that he had with Jenna’s couch. Yes, that’s right. Jenna’s couch. I wasn’t even sure I heard correctly. I couldn’t tell you the rest of the scene, because I was far too busy laughing at that line to be paying attention. It did have something to do with how that relationship ended, though.

Okay, so now that I’ve had some experience with Wilfred, I have another confession to make. I love it. Wilfred the character (who I now know is played by Jason Gann, from the Australian series of the same name) is incredibly funny and oddly lovable. I think I’ll come to like Ryan more as the season goes on, especially if he’s given up on Jenna. I am really excited to see more Alison Mack as Amanda! I will definitely keep watching just for her.

The only sour taste left from the episode was watching Ryan pine over Jenna when it was obvious–at least to me–that she is so not right for him. I really, really hope that doesn’t continue over the season. It’s just not something I could stand to continue watching.

I wish I could have captured more quotes from the episode, but then this entire post would be littered with them! My suggestion? Just watch the episode. It’s 20 minutes you will not regret. Even if you’ve never seen the first season, you’ll still understand the basics of the plot and (even better) you’ll still get the laughs.