There is something quite addicting about flippers flipping metal balls across a giant pinball table filled with lights, tubes, and bumpers. Add some iconic Marvel superheroes to the mix, and what you get is a pinball experience that will keep you coming back for more. Zen Studios, the wizards of pinball, are back with four more classic tables for your 3DS handheld that are sure to please both pinball fans and comic aficionados alike.

If you’re familiar with the various console versions of pinball Zen Studios has released over the years, you’ll feel right at home as Marvel Pinball 3D doesn’t skimp on any of its predecessors’ signature features. Controls are responsive, and the game doesn’t lag at all despite all the action that takes place on your table. The shoulder buttons (or the d-pad and B button) control the flippers, and how hard to push down on the Circle Pad determines how much the table tilts. Controls couldn’t be any simpler.

Visually, Marvel Pinball 3D looks just like Zen Pinball 3D that released a few months ago on the Nintendo eShop, but what’s new here are the four Marvel-themed tables that come with their own unique charm, characters, and missions to undertake. These tables include Iron Man, Fantastic Four, Captain America, and Blade. Despite having less screen space to work with on the 3DS, the developers have done a great job capturing all of the little intricacies that make each table unique so if you’ve already played them before on the console, you’ll appreciate how they’ve been recreated for the handheld.


Because of the small screen space, however, the graphics do get a bit muddled when looked at from afar. Thankfully, the game offers eight different zoom levels that place the camera at different angles and even follow the ball to give you more dynamic views of the table. Once you turn up the 3D slider, the game’s graphics pop out like the pages of a comic book and create the feeling of looking down into a real-life pinball machine. 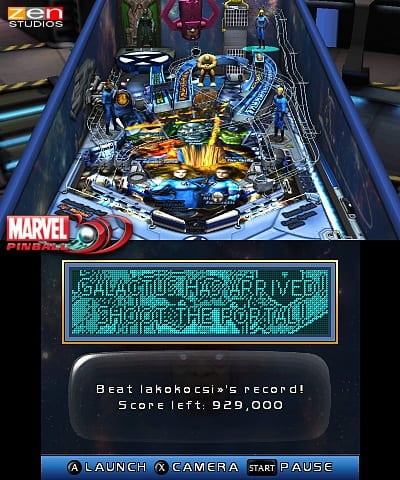 Each of the four tables have a plethora of crevices to explore, and each time your ball bumps into one of them or slides through certain pipes, different missions will get activated that will increase your chances of increasing your score. There are so many things to explore, in fact, that each table also includes a guide that walks you through all of them. The Fantastic Four table, for example, includes missions for each member of the team with different requirements and difficulties. If you manage to complete all of the table’s missions and even Dr. Doom’s challenge, you’ll get to “battle” against Galactus. These may seem like simple pinball tables, but there is so much Marvel lore infused in them that is sure to please even the most avid of comic book fans.

Pinball is all about scoring high, after all, and Marvel Pinball 3D includes challenging in-game achievements and online learderboards to keep you busy for a while. Even if you play offline, your scores will be uploaded to the game’s leaderboards next time you go online. The game tracks your scores in different ways and includes weekly, region-based, and all-time rankings. It also gives you a cumulative score on the game’s four tables and ranks you up against friends. While the game is made for multiplayer scoring, the game’s local hot seat mode lets you pass your 3DS around and play with up to four players.

Marvel Pinball 3D is a very enjoyable pinball game that is great to see on the 3DS and perfect for casually playing on the way to work or when you want to have a serious pinball battle against your friends. Marvel fans will appreciate how accurately the game portrays their favorite heroes, and pinball fans will appreciate the game’s accurate pinball physics. The game may only provide four tables, but each one if filled with plenty of action suitable of any superhero game out there.