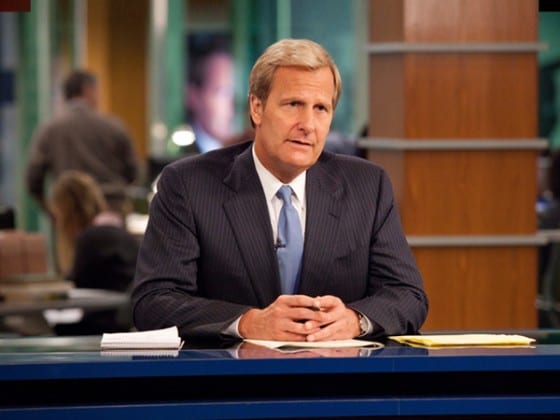 Jeff Daniels as Will McAvoy on HBO’s new Aaron Sorkin-scripted drama, “The Newsroom.”

HBO’s new show, “The Newsroom,”—created by Aaron Sorkin (screenwriter of “The Social Network, and creator of “The West Wing”)—aired its premiere episode this Sunday night, and it was a solid, enjoyable piece of television. Jeff Daniels stars as Will McAvoy, a news anchor critiqued for being “the Jay Leno of news anchors.” That is, popular because he doesn’t bother anyone.

In the opening scene, a debate between Will and two other news anchors/political pundits, we get a sense of just how Leno-esque Will is when he continually refuses to align himself with one party or another.

After being pushed into giving a real answer to one student’s question – “What makes America the greatest country?” – he goes on a two-part rant that is immediately videotaped by students in the audience and that probably went viral within the day. Inspired in part by a mysterious woman he keeps imagining in the audience, who holds up a sign that answers “It’s not. But it can be,” Will outlines exactly where America is failing and then waxes nostalgic about the days when we had moral reasons for our actions and pioneered the building of great things. He blames his outburst on vertigo medicine and after the title credits, it jumps to three weeks later.

We’re introduced to the secondary characters, Don (Thomas Sadoski), Maggie (Allison Pill), and Neal (Dev Patel), who are the only folks in the empty newsroom that Will walks through upon his return from vacation. It turns out his entire staff, minus Maggie, Neal, and a few unnamed extras, is following Don, the executive producer, to the new 10:00 show.

Understandably upset, Will confronts his boss, Charlie Skinner (Sam Waterston), who informs him that he’s gone ahead and hired a new executive producer for Will, a woman named Mackenzie (Emily Mortimer). She’s been embedded with the Marines in the Middle East for 26 months and now she’s looking for a newsroom job back. It’s obvious from the first moment Will realizes who’s been hired that these two have some serious history together. She also turns out to be the woman he imagined he saw in the audience before.

Mackenzie is clearly smart, capable, and perceptive, and she’s extremely passionate about the news. She gives a rousing speech about reclaiming journalism and shaping the coming debate in America in an effort to convince Will to let her keep her new job and to get him excited about doing a “real news show.” This speech, much like the second half of Will’s first rant, veers a little towards cheesy at times. Overall, though, I think the script undercut it with enough sarcasm from Will and authentic emotion from Mackenzie to keep it from being a complete cliché of a pep talk.

Meanwhile, outside of Will’s office, Mackenzie’s staff who came with her clash with the existing staff who haven’t moved on yet. This confrontation is particularly heated between Jim, Mackenzie’s senior producer, and Don when Jim insists on following up on a yellow-level news alert about an offshore oil rig fire in the Gulf of Mexico. Here it’s revealed that the date is actually April 20, 2010, and instantly we know this is the oil spill, the BP spill that made the news every day for months.

I’m interested to see what the significance of placing this show two years ago might be. Obviously here it served to give Will a big story to break (one that the audience would instantly recognize as important but that the characters might not in the moment) to launch his new Mackenzie-steered show, but I wonder what other 2010-specific news items might become major plot points. The bailout of Greece? The trapped Chilean miners? Time will tell what the show’s spin on 2010 will be.

Jim teams up with Neal, Maggie, and his personal outside sources (a former roommate at BP in London and an older sister with Haliburton who made materials for the rig) to pitch the oil spill story to Mackenzie and Will. In spite of all the bitterness Will carries for Mackenzie (can’t wait to get the back story there), they ultimately decide to run with the story and do a “real news show” just like she wanted.

On camera, Will is clearly in his prime as he holds all his interview subjects accountable for real answers to his questions and manages to seamlessly integrate all the moving parts of the breaking story without a real teleprompter script. The camera toggles between Will’s broadcast, people watching Will’s broadcast in the station itself, and the behind-the-scenes action in the control room with Mackenzie and the crew. The tension was almost palpable, and I think the show did a great job in conveying the time crunch and the stress associated with a live broadcast of a developing story. Even I found myself getting a little on edge when they called out the countdowns to going live.

The story turns out to be a huge success, and Will covered it in a way that nobody else had that day- most people talked about the volcanic ash in Iceland and the iPhone prototype that somebody left in a bar (remember that story?) and only mentioned the oil rig explosion briefly at the end. Will’s broadcast elevates the story to a red level, the crew cheers, and we learn as Will and Mackenzie are leaving that she really had been in that audience the day he gave his infamous rant—the signs are still in her binder.

I loved that there was already character development even in one episode of the show. While there obviously isn’t a whole lot there yet, I think the possible paths for each character’s story to take are definitely present already.

Will is going to have to adapt to working with Mackenzie, and he’s going to have to step out of that Jay Leno comfort zone he’s built up for himself. He’s already shown (very marginal) improvement in the way he wants to treat his staff. I laughed out loud when he complimented the wrong crew on their good teamwork and then decided “Ah, screw it” to finding his own. Clearly, he’s got a long way to go.

Maggie, whose relationship with Don doesn’t seem to be the best thing for her, stepped up in a big way with her research about the lack of proper government inspection on the rig that exploded. Will even remembers her full name afterwards, so I predict that she becomes an invaluable member of the team and gains some self-confidence. I’m also sensing the possibility of romantic tension between her and Jim as the show goes on, especially if her relationship with Don falls apart (which, for the record, I am also predicting, considering his lack of belief in his girlfriend and her abilities to do her job).

And, of course, I’m already dying to know what happened to break Mackenzie and Will apart and whether they’ll ever move past it. As Charlie pointed out, they managed to put a lot of faith in each other to do that broadcast despite their history and despite Will’s assertions that Mackenzie is not to be trusted. Are they going to be able to reconcile? Since Mackenzie apologized to Will multiple times this episode, I’m going to guess their falling out might have had something to do with her decision to go to the Middle East and cover the war.

In any case, “The Newsroom” was enjoyable, and it’s clear from the premise of trying to shake up the current format of TV news shows that there will be plenty of obstacles in their way to create drama and plot for the show. The message, about returning to “real” news and less polarized journalism, seems like something I’ve heard time and time again, which is mainly what prevents me from giving it five stars. I’m definitely interested to see what new places this show might take this idea though, and the characters are already defined enough for me to want to tune in again.

“The Newsroom” airs on HBO, Sunday nights at 10:00 Eastern, for anyone who’s interested in watching along with me!