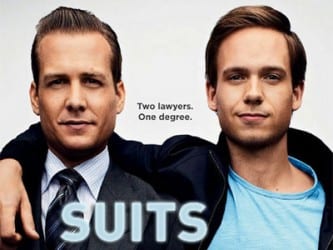 The first few minutes of “The Choice” serve as a reminder of what’s been going on at the firm lately:  Mike listens to Rachel’s voicemail again and seems rather pleased about it, Mike has an awkward exchange in the elevator with Jessica Pearson, and the construction of Hardman’s new office is nearing completion.  As Harvey and Jessica look over the construction, Louis drops by and asks Jessica who he should answer to – her or Hardman.  Jessica tells Louis that she supports Hardman’s orders to summarize the firm’s cases and sends Louis off.  When Harvey asks Jessica why she lied, she says, “Because you don’t let the children know mommy and daddy are fighting.”

This battle between Jessica and Hardman is the center of “The Choice,” as various people at the firm begin deciding where their loyalties lie.  Though Harvey and Mike are clearly on Jessica’s side (despite Hardman’s near successful wooing of Mike by creating an omelette bar for the associates), Louis’ loyalty hangs in the balance along with a number of the firm’s departments.  As Jessica meets with Harvey about encouraging some of the departments to take her side, Donna comes in and reveals that almost everybody hates Harvey – they’re just sick of Harvey being right all the time.  Eventually, Jessica tasks Harvey with courting the head of the bankruptcy department, Paul Porter.  Harvey tells Mike to research all of Paul’s cases so they can find an in.

In an amusing side-scene, Louis approaches Donna and asks for information about the Pearson / Hardman battle going on.  The dynamic between these two is one of the show’s funniest, and this encounter involves Louis trying to bribe Donna with two tickets to a show she has been dying to see.  Though Donna stays strong and insists that she can’t tell him what she doesn’t know, Louis backs away with the tantalizing last word – “Curtain’s at eight.”  Later on in “The Choice,” Donna has to ask Louis for a favor and once again this comical pairing provides a good laugh.  Hopefully the writers will continue to give these two ample screen-time together. 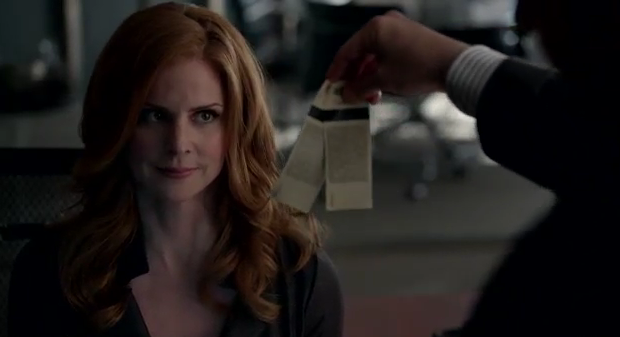 On the Rachel / Mike front, things take an upswing when he tells her that him and Jenny broke up.  With this new information, Rachel gives into Mike’s advances and agrees to go on a dinner date.  They discuss keeping their relationship quiet in the office and Mike rather obviously covers talk about their romance with business conversation.

Meanwhile, Harvey is working on closing Paul Porter.  Over a fancy lunch at an expensive country club, Harvey asks Paul’s permission to sway one of his clients into accepting the firm’s help in filing for bankruptcy.  In exchange for persuading the client, Porter will maintain his loyalty to Jessica if Hardman ever calls for a vote at the firm.  The scene brilliantly concludes with Harvey dropping the fact that Porter is scheduled to play a round of golf not with Harvey, but with Fred Couples (though I feel Tiger Woods would have worked even better.  Many non-golfers have no idea who Fred Couples is).

Having successfully charmed Porter, Harvey and Mike approach his client about filing for bankruptcy.  The client, Tom, is in the middle of a huge renovation project that is about to go belly-up.  There is a clever football analogy used here, as Tom tells the guys that he’s the type of player to throw a hail-mary pass at the end of the fourth quarter.  As quick with his wit as ever, Harvey parries with, “Everybody throws a hail-mary when they’ve got nothing to lose.  You’ve got something to lose.”  Tom remains firm in his resistance to file for bankruptcy, so Mike comes up with another plan.

Mike and Harvey approach the bank handling the loans for Tom’s renovation project, but they refuse to adjust the terms of the loan.  When they try to convince the woman at the bank to reconsider, she replies with the snide comment, “I’m sorry gentleman, but this is not 2007.  We don’t play that game anymore.”

Harvey returns to his office to find Paul waiting for him.  Paul has heard about what Harvey and Mike have been up to and isn’t pleased.  Harvey argues that they are doing what is best for the client, but Paul demands that he persuade Tom to file for bankruptcy.  If Harvey doesn’t do as he asks, Paul threatens to back Hardman if a vote does eventually come up. 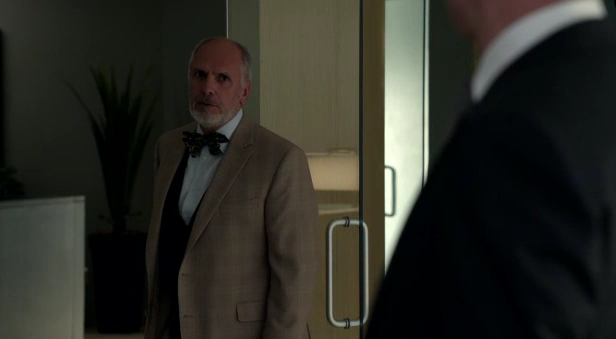 Paul Porter responds to Harvey’s antics with a threat

It’s interesting, because Paul represents a foe that Harvey may not be able to sweet talk, unlike his usual opponents.  This case is very black and white, and going against Jessica’s will (as Harvey takes such pleasure in doing) will definitely result in losing Porter’s support.  There’s no middle ground for Harvey on this one – he’s going to have to make his choice (which brings us back to this episode’s title), either to win this case for himself or for Jessica / Porter.

After doing more research, Mike has found information that reveals Tom’s bank is forcing him and others to foreclose on their property, which allows the bank to buy the property for their own new offices.  When Harvey and Mike revisit their banker friend, her cocky attitude drops and she’s ready to play ball.  Everything is set up now, and it’s up to Harvey to decide whether he does what’s best for Tom and himself or Jessica and Porter.

While the Harvey / Porter battle rages on, Louis has been having serious doubts about his loyalty to Jessica.  She has continued to make him feel unappreciated and unneeded at Pearson Hardman, and now Louis is having thoughts of going to a different firm.  In a short scene, Louis meets with an associate from another firm, who assures him that a number of other firms would take him in a heartbeat.  It’s obvious that Louis is really on the brink of abandoning the firm, and this scene proves that he could jump ship any moment now.

After a successful dinner date, Rachel hits Mike with the comment, “See, honesty.  I love that in a man.”  This clearly gets Mike thinking, and he decides not to spend the night with Rachel.  Instead he goes to Harvey’s house, where he tells him that he’s going to tell Rachel the truth about him being a fraud.  Harvey forbids him from doing so, and tells Mike that he either stays with Rachel and lies, or doesn’t date her at all.  An intriguing side-note about this scene at Harvey’s place is that there is a woman in the apartment that Mike never notices.  What if she overheard what Mike and Harvey were (so loudly) talking about?  We’ll see if this mystery woman resurfaces in the future. 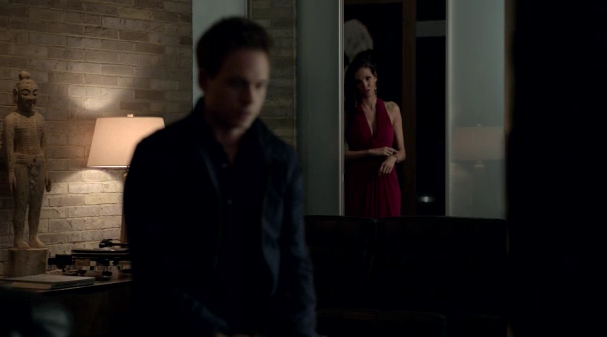 Mike next runs to Donna about the Rachel problem, who eventually explains to Mike that Harvey threatened to leave the firm if Mike got fired.  This sobers Mike up, and helps him decide to ultimately break things off with Rachel.  When Mike meets Rachel for coffee and ends their relationship, she doesn’t take the news too well and storms off.

The scene between Mike and Donna is intriguing because, when she assures Mike that they’ll still be able to work together after the breakup, she seems to be speaking from experience.  It’s never explicitly mentioned that Donna had a similar experience of her own at the firm, but could it be possible that the writers were hinting at a Donna / Harvey romance that happened years ago?  Hopefully this season’s flashback episode will shed some light on this.

When Harvey meets with Tom and Paul Porter, he tells Tom that the bank was willing to renegotiate his loan to avoid filing for bankruptcy.  Harvey made the decision to do what was best for the client, and Paul isn’t exactly thrilled by it.  Word gets back to Jessica, and her and Harvey have a meeting on a rooftop balcony in what is one of the best scenes so far in the new season.

The rooftop scene between Harvey and Jessica is this fascinating back-and-forth interaction between the two in which everything is laid out.  Jessica feels betrayed by Harvey’s choice to ignore her requests and side with the client, therefore losing the Paul Porter’s loyalty.  But Harvey soon realizes that she’s not just angry about the case – she’s still pissed about the Mike Ross debacle.   The entire conversation covers so much regarding these characters’ relationship with one another and the current turmoil at the firm, while also touching on topics of loyalty, arrogance, and abandonment.  The writers deserve recognition for this scene, as do Gabriel Macht and Gina Torres for their performances.

To make matters worse, Louis has decided to stay at the firm – and shift his loyalty from Jessica to Hardman.  When he receives a personal voice recorder as a gift from Hardman, Louis decides he’s fed up with how Jessica’s treated him.  He makes sure that Hardman’s office is in perfect condition for his return, which is where Jessica asks him if he needs her anymore (their conversation was abruptly interrupted earlier in the episode).  Louis says no and makes it clear that he is now Hardman’s man. 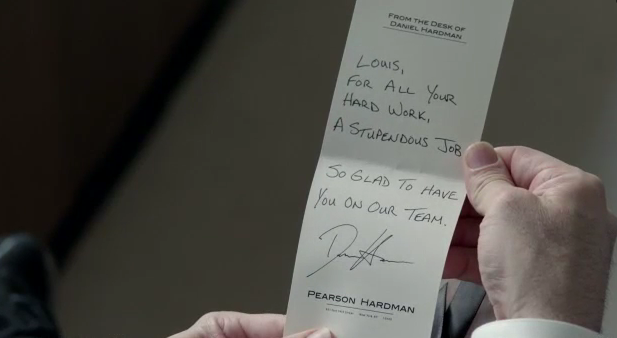 Before all hope is lost, “The Choice” wraps up with Harvey visiting Jessica in her office.  He brings her tea and reassures her that, “You’re not alone in this,” before heading back to his office.  It’s a nice scene to wrap up an episode that otherwise focused so heavily on the breaking of relationships and the loss of loyalty.

It’s hard to imagine that “The Choice” could top the fantastic season two premiere of “Suits,” but it did.  It was exciting to once again see a case not only take a back seat to the relationships between people at the firm, but to also act as a catalyst in establishing where people’s loyalties lie.  The writing in “The Choice” is as crisp as ever and the stakes couldn’t be higher.  It will be exciting to see Hardman enter the office and add a whole new layer for these brilliant, dynamic characters to deal with.