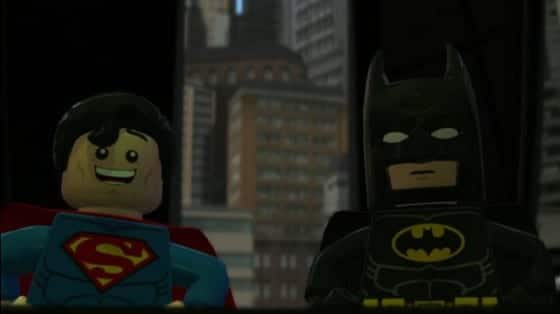 You may not have realized it as a kid, but the true allure of Legos has always been their versatility. Here’s a toy that you could easily break apart and reassemble in a completely new way that would make it somehow feel brand new. Lego Batman 2: DC Superheroes is a lot like its source material — it’s not anything brand new, but it takes the pieces it’s given and assembles them in a new way — complete with production values unheard of for the franchise and new mechanics to create something that still feels fresh and unique. Deep down, this is still the Lego game you thought it would be, but it’s also far from it.

Lego Batman 2 is a much more ambitious outing than its predecessor, and as the title suggests, involves more heroes than just the dynamic duo. After losing out to Bruce Wayne in Gotham’s Man of the Year award, Lux Luthor runs for president and aligns himself with a unique campaign manager — the Joker, who is using Kryptonite to trick people into voting for Lex. It’s an evil plot that will require the entire Justice League (yes, even Aquaman), to solve.

The story itself may not be that unique (it is entertaining throughout though), but it’s how it plays out that sets Lego Batman 2 apart from its predecessors. For the first time in the series’ 15-year history, Lego Batman 2 features full voice support for each of its characters. While it may seem like a bit of blasphemy to replace the series’ well-known grunts and smirks with actual words, but the voice acting is so well done and performed by a literal who’s who in the world of voice acting that it works extremely well and gives the characters a unique personality. Plus, games like Lego Star Wars and Lego Indiana Jones acted on our fond memories of those beloved films, the original Lego Batman featured an original story, so the grunts and facial expressions often made gamers feel lost.

The voice acting adds a hefty amount of personality to the characters and the game itself, with a great example being big blue — Superman himself. A lot of properties make The Man of Steel into a supreme badass, he flies in, does what a superman does and flies out. Here, the writers get it right, by making him the naive, comic foil to Batman’s grim and dark demeanor. There are some truly memorable moments here, like Lex Luthor trying to convince the Joker to kill Batman and Robin nerding out over the arrival of Superman, much to the dismay of the Dark Knight, and these moments would not be possible without the addition of talking mini-figures.

Gameplay wise, Lego Batman 2 is of course similar to the Lego games that came before it — you’ll run around, jump from platform to platform, switch between characters and of course — smash everything. That isn’t to say though that the game doesn’t offer anything new, quite the contrary in fact — it’s packing quite a lot in its utility belt.

The game takes place in an open world Lego Gotham City, which makes the game a lot easier to navigate — most of the time. Slight graphical glitches and miscues can cause you to get stuck in certain sections of the game, and the fast characters like Superman and The Flash often move fast for the game to even handle, meaning that you’ll have to wait for the game to catch up to what you’ve already done.

What’s perhaps most endearing about Lego Batman 2 is how it takes the established Lego game formula and tweaks it to create what’s easily the best game in the series. The experience is no longer about tight platforming (though it’s still there) but rather more about cooperation and puzzle solving than recent games. The controls and tighter, the platforming more precise and the actions more varied — Lego Batman 2 gets it right.

The Blast Factor: After 15 years, the Lego games were at a bit of a crossroads — evolve or get left behind; and Lego Batman 2: DC Superheroes is the answer. It may not be a complete refresh of the series, but it does manage to create some good ideas with that’s already in place. This combined with great visuals may not be the long term answer for Lego, but it does make Lego Batman 2 the best Lego game we’ve seen.

This review was based off an Xbox 360 copy of the game provided by the publisher.