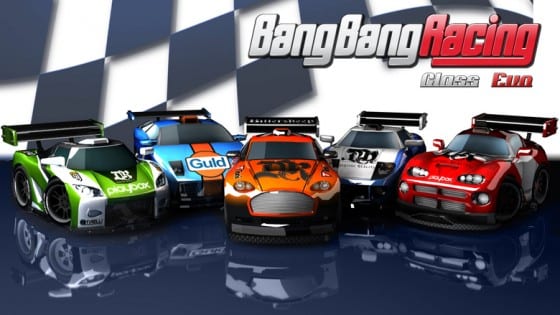 If you still harbor a secret desire to play with toy racecars, but want to avoid judgment from your peers, Big Bang Racing may be just what you’re looking for.  Created by the folk who brought us Sine Mora (which was recently announced for the PlayStation Vita),  the isometric Big Bang Racing is reminiscent of old-school, top-down racers such as Rare’s RC Pro-Am, and Codemaster’s Micro Machines.

Divided into Career, Championships, and Free Play mode, BBR pits up to 4 racers against each other via split-screen, or 1 player against computer controlled AI racers, on obstacle-laden tracks while competing in various events such as standard races, elimination races, and time trials.  While Free Play mode is self-explanatory, and Championships Mode requires players to complete a specific number of standard races, the core of the game lies in the single-player Career mode.  Comprised of 4 exponentially difficult vehicle classes, Career Mode tasks players to compete in a variety of events, unlocking tracks, cars, events, and advanced difficulty levels.

Each racer has an HP bar indicating their vehicle’s condition, and a nitrous bar for boosting.  While the nitrous bar slowly refills after time, the HP bar can only be refilled by driving through the pit lane, located near the starting line.  Players aren’t required to drive through the pit lane, but after taking a certain amount of damage, vehicles slow down and handle poorly.  This forces players to continually decide after every lap to either swerve out of their way to replenish their HP and nitrous, or press on to avoid losing valuable time on the clock.

BBR’s adorably plump racecars handle surprisingly well.  The responsive controls consist only of steering, gas, brake, and nitrous speed boost (while applying the brake and gas simultaneously to initiate a drift).  Simple and unintimidating, these easy-to-learn yet difficult-to-master controls are well suited for both casual racing fans and seasoned racers alike.  When executed correctly, the drift and nitrous boost technique is not only immensely satisfying, but a necessity when racing at the higher difficulty levels.

The soundtrack isn’t exactly groundbreaking, but it doesn’t detract from the fun either.  If the odd blend of electronica and Middle Eastern music just isn’t your jam, you can always turn the music off altogether and blast that Fast Five soundtrack you bought during your last drunken Amazon.com shopping spree. 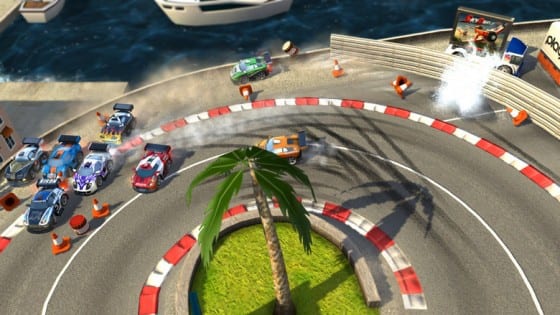 Underneath its charming little hood, Bang Bang Racing does have a few problems.  While displayed during the vehicle selection screen, there is no mini-map to be found while actually racing.  Although the tracks’ yellow arrows aid in planning for the next big turn, it would be nice to know where other racers are located.  Plus, the pudgy little cars may be endearing, but when stuffed into narrow tracks, multicar pile-ups are an unavoidable occurrence around many tight corners.

The isometric view obviously sets this game apart from other racers, but it feels as though the game’s visual potential was squandered, opting for tracks with little actual variation.  Obtaining the Hot Wheels, Micro Machines, or even Playskool license for BBR would have been perfect not only for nostalgic purposes, but BBR’s overhead perspective, bobble-head spectators, and  bubbly vehicles makes the game feel less like a serious racer, and more like playing with toy cars. Cornering the same generic tire-lined tracks just isn’t as fun as ripping across kitchen tables and drifting around giant billiard balls.  With that said, if Digital Reality and Playbox are ever put in charge of the Micro Machines franchise, I will be a happy man indeed.

The biggest problem I had with BBR was its glaring omission of online multiplayer; a problem which drastically limits the game’s replayability, especially for those who do a majority of their multiplayer gaming online.

Blast Factor: Big Bang Racing may be the cutest racer on Xbox Live, but its visual charm alone is not enough to make it a great game.  The difficulty levels and unlocks are well paced, but 800 Microsoft Points feels like a lot to ask for a game that is severely limited by its shallow depth, limited variety, and lack of online multiplayer.  However, in a world full of cookie-cutter games, BBR’s twist on racing does set it apart from the crowd.  A 400 Microsoft Point price tag would easily makes this game recommendable, especially to those who have fond memories of pushing their around their Micro Machines and Hot Wheels in the dirt.