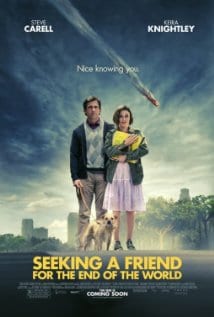 If there have been three things that movies have had an excess of in the last ten years, it’s been Manic Pixie Dream Girls (“500 Days of Summer,” “Elizabethtown,” “Garden State”), Life Crisis Nice Guys (“Little Miss Sunshine,” “Dan in Real Life,” “Nick and Norah’s Infinite Playlist”) and Armageddon (“The Road,” “Terminator Salvation,” “Sunshine”). Now, when all three establishments seem to be in decline, Lorene Scafaria brings us “Seeking a Friend for the End of the World,” a film starring a Manic Pixie Dream Girl (Keira Knightley) and a Life Crisis Nice Guy (Steve Carell) dealing with Armageddon.

“Seeking a Friend for the End of the World” takes place in the near future, where all attempts to divert a cluster of meteors from striking earth have failed and scientists have given the human race three weeks till extinction. Insurance salesman Dodge’s (Carell) wife runs away after the announcement and he finds no solace with his friends who have become steeped in excessive amounts of drugs and alcohol. He soon meets Penny (Knightley), a hypersomniac British girl who regrets not being able to speak to her family once more before the end (due to the cancellation of flights and phone service across the country) The two team up, leaving New York City and traveling down the east coast to find Dodge’s High School sweetheart and find Penny a plane and pilot to get back to England. On their trip they come across the best and worst humanity has to offer in the form of suicide cases, sociopathic cops, family restaurants turned Roman Orgies, and those who hope to make the world better in the little time they have left.

Seeking a Friend for the End of the World is a movie that has several clear influences. The sci-fi in the movie borrows part from social commentary episodes of “Twilight Zone,” with much of the screen time dedicated to showing the different ways people deal with the impending disaster. There are also elements of such modern day sci-fi stories as “Cloverfield” and The Walking Dead, with the major disaster of the film being displayed on the peripheral while the audience remains focused on the main characters arcs. The comedy of the movie comes mainly from the awkward silence indie film scene as well as from recognizable cameos including Patton Oswald, Jillian Jacobs, and Rob Corddry.

The main strength of “Seeking a Friend for the End of the World” is mostly in the side characters and background acting. Seeing what becomes of East Coast civilization in its final days goes from being hilarious to unnerving with some awe and frustration thrown in between. Unfortunately, the weakest parts of the movie are the scenes dealing with Dodge and Penny, which covers most of it. Their romance is thin and filled with the clichés that have plagued indie love stories for the past decade (including a sickening allegorical speech about vinyl from Knightly). It is a shame, seeing as the movie has many opportunities to be its own thing while it chooses instead to fall into the usual tropes.

“Seeking a Friend for the End of the World” is a good movie stuck in a bad scene. The background events and philosophical commentary is strong, but with the quirky girl with a strange medical condition, the nice guy abusing prescription medication and the constant name dropping of obscure albums and their personal meaning to the main characters it’s filled to the brim with what has become the archetype for the awkward pause romance. Fans of Little Miss Sunshine, Juno, and Garden State will find the movie enjoyable but anyone looking for anything else may be disappointed.