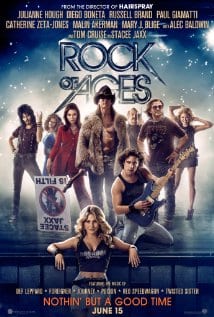 “Rock of Ages” the movie based on the Broadway “karaoke musical,” mainly walks that fine line too. But the burden of two “Glee”-riffic leads (Julianne Hough and Diego Boneta), a bad sense of a pacing and an uneven cast of stars with varying degrees of musical talent often hurtles this barrel of jukebox fun into awkward territory.

I feel bad saying anything against Julianne Hough. Her epic chipmunk cheeks are only matched by her truly impressive song and dance skills. She’s a double threat though, not triple. She seems unsure of herself in a speaking role, just waiting around for someone to break into song so she can get back into her comfort zone. And her love story with wannabe rock-and-roller Drew (Boneta) is pallid- she and Boneta have zero chemistry together, and watching them make awkward conversation about how Drew has stage fright, and isn’t that adorable is exhausting. Boneta, for what it’s worth, is also an excellent singer, though he has nothing on Hough’s pipes and stage presence.

But if you want to talk about stage presence, let’s talk about Stacee Jaxx (Tom Cruise). It’s pretty well-established that Cruise is at his best when he appears to be playing thinly-veiled versions of himself. And what can I say about how excellent he is in this? Jaxx, who’s the lead singer of a band called Arsenal just on its way down the fame hole, is languid, vaguely spiritual, and very possibly psychotic. Cruise wanders around shirtless through most of the movie, puffing out his barrel chest and running his hands over his copious tattoos to make the poor rock babes around him faint. He speaks in nebulous aphorisms about the pangs of fame, and has a trained monkey in various adorable suits bring him his scotch. He recognizes women he’s seen before by placing his hands ever so gently on their breasts. In one of the best moments in the movie, he does this to a former groupie, whispering to her, “Ah, Patty. Your tits…have held up well.”

Seriously. What else do you need to know? I’m not sure whether Cruise can sing exactly- it seems like a lot of magic was done in post-production- but he’s every inch the rock god, saying more about the importance of stagecraft and fronting than being an artist.

The rest of the cast is occasionally charming, occasionally good at singing and dancing, and frequently just shoe-horned in to add to the star power of the whole enterprise. Alec Baldwin plays an aging rocker who runs the Sunset Strip rock club that is the nexus of the plot, and Russell Brand plays his glorious self as Baldwin’s sidekick. Baldwin and Brand do a version of “I Can’t Fight this Feeling Anymore,” finally declaring their love that dare not speak its name- it’s a little offensive in that it’s generally played for laughs, but the power of the power ballad pulls it out of the homophobic mire at the last second.

Paul Giamatti plays Jaxx’s slimy manager, Catherine Zeta-Jones plays a Tipper Gore-like anti-rock advocate, Malin Ackerman is a Rolling Stone reporter, Mary J. Blige is a strip club owner, Bryan Cranston is the mayor… the list goes on and on. There’s something cheap about packing a movie full of stars, most of whom can only sing a little- it’s certainly not an unusual strategy (and one Shankman employed for “Hairspray” a few years ago), but it leads to us whipping around to each person in turn, establishing that they’re there, and then moving on. There’s no break for reflection, or even to set the scene. I wish they’d allowed us to take a look around the settings- the greasy rock club, an upper-crust strip club, a Tower Records. All we see are stars with no sense of place or time. And all those stars end up adding to very little.