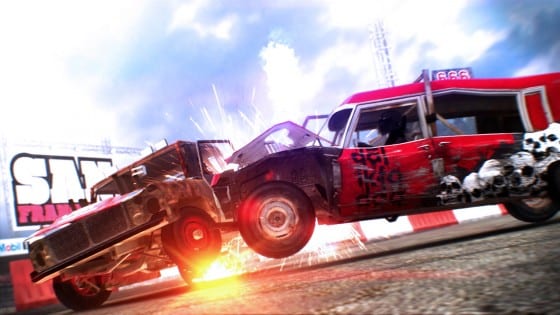 Everyone has that one friend that constantly tells you all about this new thing they’ve found and they’re now all about. They relate everything back to their new found obsession and try to find ways to get you and everyone else talking about it.

Dirt Showdown, the new destruction centered racer is a lot like that friend — and it’s obsessed with making sure you and all of your friends know how awesome it is. It’s overzealous nature is a bit off putting when it constantly tries to remind you that — at least in its own mind — you’re playing the greatest game ever. It flashes words (and sometimes made up ones) on the screen to tell you how cool that move you just did was, it wants to control your twitter feed, it wants to upload to your Youtube. The funny thing is that Showdown isn’t a terrible game, and at times it can be downright entertaining, but thanks to its overzealous nature and lack of depth, you’re sure to grow tired of it long before you should.

The first thing you’ll notice when booting up Showdown is that it is in fact a Codemasters developed racing game, and as such, the presentation is remarkably well done. The cars themselves are remarkably well detailed and perform well, even when the action gets fierce. The environments are also done well, as the crowded city streets and busy arenas often feel very alive thanks to hectic action and some cool effects. Of course, this is all standard practice for Codemasters’ racing titles and the game never really strays from those company conventions, but does it really need to?

All that aside, Dirt Showdown is not your average racing game, and it often feels more like a spinoff of last year’s impressive Dirt 3, since it takes that title’s mini games trick based events and makes an entire experience out of them. The game rewards you not for racing expertise and driving skill, but for near misses and even more so — spectacular crashes.

For the most part, this works as it’s extremely rewarding to ram your sweet ride into another, causing them to flip into a glorious ball of fire. This is aided by the fact that the vehicle models, which look impressive to begin with, wear down impressively, making it even more satisfying to take them out.

There are a number of scoring based events throughout Showdown, some which require you to complete skill based objectives like knocking down pins and others like the destruction derby event that forgets all pretenses and just asks you to be as violent as possible. Throughout these events though, there are some fishy scoring mechanics that seem to work only when they want, and not when the rules set by the game itself say they should. It’s a minor gripe in a game like this, but a solid one none the less.

The career mode in Showdown is a bit of a peculiar one. There’s not really a single player mode to speak of, but the game allows you to take on several social challenges and compete against other players and compare scores in the campaign on services likes Twitter and Xbox Live. It’s cool the first few times, and a lot of games give you the option of connecting to services like that, but Showdown is insistent that you do it, and will bombard you with popups until you’re so annoyed by them that you just give in and connect — and then you become that guy, the one who’s tweets everyone ignores because they’re all about Dirt: Showdown.

But Showdown doesn’t stop there, and it makes sure you, and the rest of the world knows just how good of a time you should be having. Perform cool moves or destroy something in grand fashion and “words” like awesometacular and t-bone-alicious dart across the screen, making you groan knowing how cheesy the whole thing is — and then of course it reminds you that upload videos of your awesometacular moves to Youtube if you’d like. Look, we get it — you’re not Dirt 4, you’re it’s lighter, cooler little brother — but do you need to try so hard to be cool and edgy?

Dirt: Showdown features a fair amount of courses objectives, but they never feel varied enough that you’ll spend more than a few days with the game. A lot of the game feels very familiar, and though it’s a value game, you’ll often question if it’s worth the money.

The Blast Factor: When it’s not trying way too hard to convince you (and others tanks to constantly asking to connect to social media like Twitter and Youtube) how cool it is, Dirt: showdown works when played in short doses. The destruction is cool, and the cars and environments look great, but it still gets old very quickly and you’ll probably be looking for the older games to entertain you.