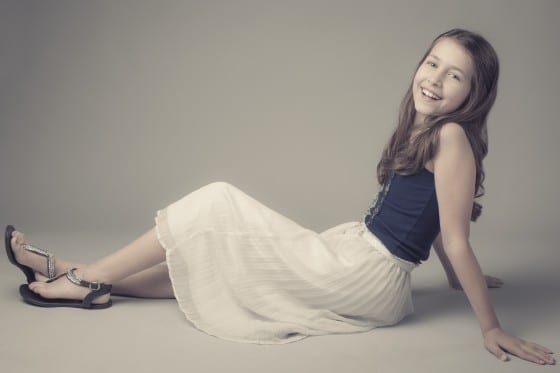 Emma Furhrmann, a delightful and charming young actress, gets her spotlight in “The Magic of Belle Isle.”

An impressive yet humble young actress, Emma Fuhrmann, was kind enough to answer our questions about her upcoming film, “The Magic of Belle Isle. In it, she’s plays a girl fascinated by her retired author neighbor, played by Morgan Freeman. She discussed with us her passion for acting, her memories from the set, and what her ambitions are as an actress. Oh yeah, and she’s only 10!

BLAST: Hi Emma! Thank you so much for agreeing to this interview with us!

EMMA FUHRMANN: Hi Mr. Peck, it’s so nice to meet you and be able to do this interview with you. … Thank you so much for the opportunity to be apart of Blast Magazine!

BLAST: My first question, naturally, starts at the beginning. You are 10 going on 11, yes (according to IMDB)? How early did you start acting and what made you decide to be an actress?

EF: Yes, I am 10. I started acting at age 5 when I went from modeling at my agency to the acting side by auditioning for my agent.  I enrolled in an Acting for Camera class at Cathryn Sullivan’s in Dallas that same summer before I turned 6 and ended up booking my first commercial audition the same week my classes started! I was hooked after that and I knew acting was what I wanted to continue to do.

BLAST: I know when I was a kid there wasn’t many things I wanted to stick with. And I’m sure there are some days where you don’t feel like acting. So, why do like to act? What keeps you interested?

EF: My parents had me doing several different things, dance, swimming, piano and I just kept really enjoying the acting the most.  I’m not going to lie, there are times when you want to give up because you get rejected a lot in the acting world, but there was something inside me that kept me wanting more.  Every time I was told “no” I just worked harder.  I really love making characters come to life and every character is so different that it keeps it interesting. I gave up the dancing, but I still swim competitively on my summer swim team each year and play the piano and guitar.

BLAST: Tell me a little bit about this movie, “The Magic of Belle Isle,”and where your character, Finnegan O’Neil (I believe?) fits into the story?

EF: Yes, my character is Finnegan O’Neil and she is a 9 year old tomboy who has recently moved to her families’ lake house with her mom and sisters after her parents separate. She also likes to make up stories, be outdoors and she’s always the first one to volunteer to help out.  The Magic of Belle Isle is about how all of the characters come together one summer in their own special way to teach each other about life.

BLAST: And in the movie, how does Finnegan and her family come to meet Mr. Wildhorn (Morgan Freeman’s character)?

EF: Mr. Wildhorn moves in next door to our families’ lake house for the summer.  Finnegan meets him for the first time at a memorial service for another neighbor.

BLAST: What is the relationship like between your character and Mr. Wildhorn?

BLAST: Now I have to ask, what is it like to work side-by-side with such an esteemed actor as Morgan 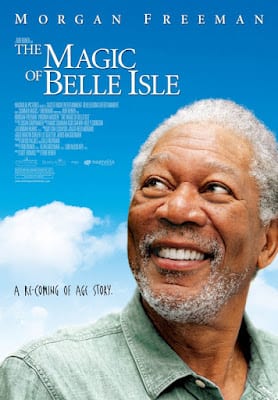 EF: On our very first day of shooting, it rained and scenes had to be changed around to indoor scenes and I was thrown into a huge scene between Mr. Freeman and I.  Neither one of us knew our lines because we weren’t supposed to know them until like day 7 of shooting.  I was a little nervous about it but he ran lines with me for a really long time and by the time it was set up and ready to shoot I was really comfortable with him.  I think being thrown into that scene like that on the first day just made the rest of the scenes that much easier.  All my nervousness was over with after that.

BLAST: This is actually a star-studded cast overall! Virginia Madsen plays your mother, right? And Kenan Thompson, from Saturday Night Live, and Fred Willard also have roles. Was it ever intimidating to work with all these well-known actors?

EF: Yes, Ms. Madsen plays my mother and she was so wonderful.  She was always thinking of others and doing nice things for all the cast and crew.  She was amazing to work with.  I only had one scene with Mr. Thompson but I would see him at base camp and he was really nice and fun to be around.  I spent a couple of days with Mr. Willard and he was just so patient and kind and just really professional.  None of them ever made me feel intimidated around them.  They were all very friendly and kind to me.

BLAST: Did you learn anything about acting by watching Morgan Freeman or any other of your castrates?

EF: I remember Ms. Madsen had said if anything goes wrong on the set and you just were not connecting, surround yourself in a cocoon of light and yes it sounds weird but you feel better! Watching Mr. Freeman I found saying your lines under your breath it helps you memorize them quicker!

BLAST: Now, it’s time for you to make your sales pitch, Emma. Why should our readers go out and see this movie?

This movie is a feel good movie full of heart and it’s a story about life, love and imagination and how a person can start over no matter what their age.  It will leave you feeling good inside.  It’s a movie your whole family can see and enjoy and laugh at too!  At the Dallas screening of the movie, people from all ages came to see the movie and they all loved it!

BLAST: If you could give any advice to a young boy or girl—such as yourself—about what it takes to make it in acting and the movie business, what would you tell them?

BLAST: Since you are still a kid, as we mentioned before, I bet you have many other interests. Outside of acting, what are some things you love to do?

EF: I really like swimming and during the summer I’m out there everyday on my summer swim team practicing.  I play tennis when it’s not so hot. I just took a volleyball camp, but I can tell you I am not a natural at that at all!  I love a good book and tend to not be able to put them down if I get one I really like.  Something I just got interested in this past year is fashion design and I like to sketch dresses and outfits every chance I get.

BLAST: Your career as an actress is just lifting off, but do you have any hopes for the rest of your career?

EF: I hope that I can keep making movies and making people feel something when they watch my movies.  I want to change lives through my acting. I hope that I can do that and just take things slow but steady!  My mom always says slow and steady wins the race!!

BLAST: Do you have any projects you’re working on currently that you can tell us about?

EF: I can’t really talk about some things in the works, but I’m really excited about the future! There are some really great projects out there and I have a really great team that truly believes in me.  I am very blessed.

BLAST: Hypothetically, if a casting agent (or anyone who didn’t know you personally) were to ask you simply, “Who is Emma Fuhrmann,” what would you say?

EF: I’m just a girl from Texas with big dreams!

BLAST: Well thank you so much Emma for taking the time to talk with me and Blast. I wish you the best as your career continues. I’m sure after this movie, you won’t have much trouble at all finding work!

EF: Thank you Mr. Peck!  I liked your questions a lot because they made me remember all the magical moments of making the film that I had. I hope you will follow me on twitter @emmafuhrmann.

For a hint at what Emma so eloquently pitched, watch the trailer: