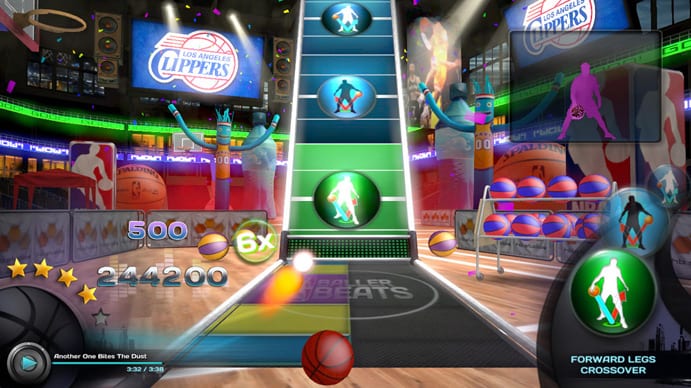 LOS ANGELES — Back when it was first announced a few months ago, NBA Baller Beats looked like one of those games your mom always told you not to play in the house – mainly because you’ll be playing with a basketball in your living room. Rest assured, the game won’t break your television or destroy your entertainment system. In fact, your mom might want you to play it because you’ll actually learn something from it.

NBA Baller Beats felt like playing a combination of Dance Dance Revolution and Dance Central with a basketball. The game involves dribbling to the beat of different songs and performing specific moves in front of the Kinect sensor. You’ll be doing actual dribbling, so if you’re not so good at this like I am, the game also includes a tutorial mode that eases you into how the game is played. The more you play the game, though, the better your dribbling skills will get, and the more fancy tricks you’ll be able to pull off. Beats definitely feels like a rhythm game because you will need to match the song’s beat with the sound of your ball hitting the floor. The more in sync you are with the song, the higher your score will be.

Each of the 30 songs has its own unique beat and can be played with three difficulty settings: Rookie, Pro, and Baller. Expect a mixture of hip-hop, electronic, and techno songs to choose from. The more difficult the song, the more hand switching, cross-overs, behind-the-back, and fake shots you’ll have to make in front of the Kinect sensor. You can’t really cheat and use just one hand to do all these moves either as the Kinect follows not only your body but the ball’s position too. Trust me, I tried.

The game also lets up to eight players play together by taking turns doing a song and competing for the highest score. Beats will also take photos of your dribbling throughout each song that you can then choose to upload to Facebook. Unfortunately unlike other Kinect fitness games, Beats doesn’t track the calories you burn. In spite of this, after playing the game for almost an hour, the game definitely felt like a workout. I’m not much of a basketball player, so not only is the game great for improving your technique, it’s also a lot of fun and quite hilarious if you’re playing with other people who can’t quite dribble either.

NBA Baller Beats will release on September 11. It also comes bundled with a Spalding basketball so you can start dribbling right away.