In this high-definition image, Venus makes its transit of the sun on June 5, 2012 (NASA) 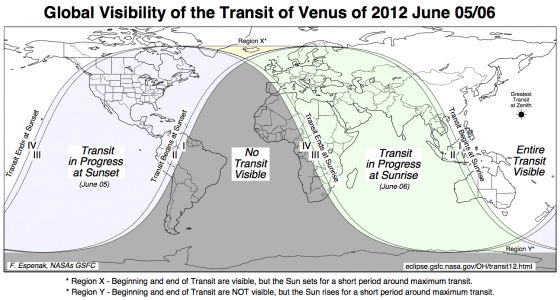 Don’t miss it! Today, June 5, 2012 Venus will cross in front of the sun, giving Earthling viewers the show of a cosmic lifetime. Venus will appear to the viewer (prior to sunset most of the United States) as a black dot crossing before the bright burning sun.

Nowadays we gaze at the World Wide Web as our source for our scientific and other understanding. National Aeronautic and Space Administration (NASA) is hosting Live Coverage of the Transit of Venus, starting 5:45pm EDT, June 5, 2012. Conveniently online, you will see the best views, without the hinderance of your local weather or pollution. Tip: Go to http://venustransit.nasa.gov/transitofvenus/ and get set up for the simulcast.

For today perhaps the most important take away is to NOT let this pass you by – no pun intended. MSNBC has published a handy “Venus transit: A last-minute guide“. If you will view this outdoors, remember to protect your eyes. 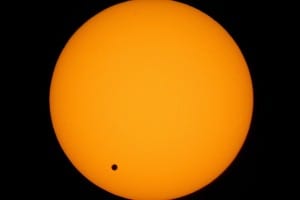 The Venus transit from Hong Kong in 2004. (Reuters)

There is some evidence that the ancient Babylonians saw and recorded on a tablet something about Venus and the Sun in the 16th Century B.C., though the record is not definite. Johannes Kepler, with the aid of Tycho Brahe, predicted Venus would pass in front of the Sun on December 6, 1631, though the transit was not visible from Europe.

The first recorded sighting of this transit was by a British cleric, Jeremiah Horrocks, and his friend William Crabtree, on December 4, 1639. Horrocks had mathematically predicted it.

In 1716, British astronomer Edmond Halley had called upon scientists to unite in a project spanning the entire globe. He predicted that on June 6, 1761, Venus would transit in front of the sun for about six hours. Hailey was correct but he did not live to see it.

The significance of the Venus transit was literally astronomical. In the 18th Century it was a major event to coordinate – to get observers to travel to far away places, and to collect data. Astronomers travelled thousands of miles and risked their lives to witness the Venus transit. Scientists collaborated with the data they collected, which was used to estimate the size of the solar system and the distance of the earth from the sun.

In 1769 many international expeditions planned observations. The most famous expedition was led by Capt. James Cook, who set up an observation post in Tahiti with his ship, the Endeavour. They later discovered New Zealand and explored Australia. Cook and his crew completed their trip around the Earth and returned to England with fame as a mariner and explorer.

The next transit, on December 6, 1882, made the front page headlines in newspapers worldwide. Using the data collected, the distance from the earth to the sun was estimated in 1885 to be 149.25 million Kilometers, or approximately 93 million miles. The earth’s orbit around the sun is elliptical, not perfectly round, and the distance from earth to sun varies through time. Today we calculate the distance more accurately using satellites and telemetry, though the 19th Century estimate was only 3.5 million Kilometers shorter than the actual distance.

Take time out for this last-in-a-lifetime opportunity to view the Venus transit.