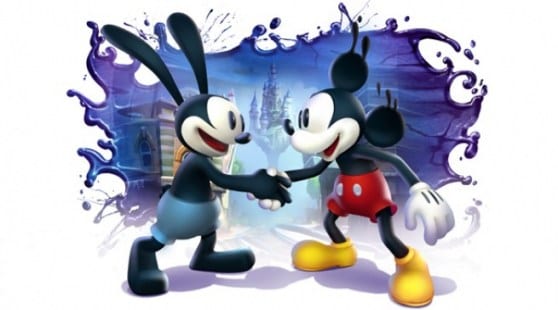 Let’s get this out of the way right away — the fixed the camera in Epic Mickey 2, the direct sequel to 2010’s platformer staring everyone’s favorite corporate rodent, but that’s far from the only improvement in the sequel.

This time around, players not only control Mickey, but Oswald as well in a full fledged drop-in, drop-out co-op mode. Described by producers as “Mickey’s wingman,” Oswald comes equipped with a ray that can disrupt mechanical equipment and even reprogram enemies completely. of course, Mickey returns the favor by using his paint and thinner in the same manner as the original.

In the level we played, we were in a cavern with a nightmarish version of the Pete’s Dragon float from the Main Street Electrical Parade. There were multiple ways to defeat Dragon, but we focused on using Mickey’s thinner ability to make crucial aspects of his armor disappear.

Oswald ran interference by using his ray to keep enemies at bay, as well as a cool blast move to stun the dragon long enough for Mickey to get some good thinning action in. At its core, the co-op mechanic of Epic Mickey 2 is not simply for two people to play at the same time, but for two players to use their unique abilities to help each other, and it requires constant communication.

By far, the most impressive aspect of the original Epic Mickey was producer Warren Spector’s love for Disney and just how much he showed that with the scenery in the game (trash cans from specific areas of the park even made it into the game). With Epic Mickey 2, Spector’s love letter to the Disney Universe is amplified, and the game includes a slew of nods to smaller and more obscure Disney properties that true Disneyphiles will appreciate. The booth showed some pretty cool artwork for a dark and twisted Toontown.

So, what about that camera? It’s not only fixed, but it’s completely customizable. The battle with the robotic parade float was hectic, and required players to manage a lot of tasks at once. We not only never had camera issues, but we were able to center it wherever we wanted with ease. The producer of the game that I met with assured me that the team working on the game listened to all of the player and review feedback, and are making a better game as a result of it.

Epic Mickey will be available on November 18 of this year for the Wii, Xbox 360, and PS3. There will be a separate version, based off the cult Sega Genesis classic Mickey’s Castle of Illusion released for the 3DS.