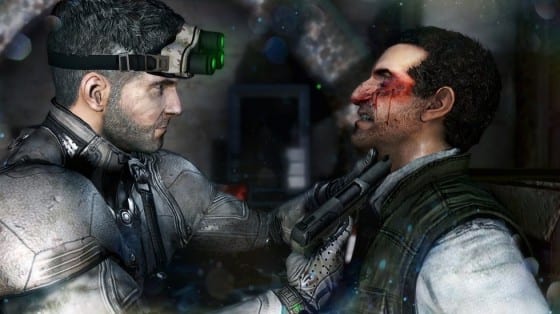 LOS ANGELES — A wounded soldier is carried into a camp. Two comrades guide the savior into a tent. An Iranian flag hangs in the back of the cold and dark room. A third man approaches the player, clearly angered by his presence. As the assailant begins to attack the player, a counter move is initiated as the player dispatches  both of the marked men and begins to interrogate his aggressor. This man is Sam Fisher. This is Splinter Cell Blacklist.

Below is the gameplay video shown at this year’s Microsoft press conference:

Ubisoft President Cevat Yerli confirmed the game for a Spring 2013 release as well as the return of the fantastic Spies vs. Mercenaries multiplayer and a separate co-op campaign.

One change, Michael Ironside has been replaced by Eric Johnson.

John M. Guilfoil of the Blast Staff contributed to this report.