You’ll have to pardon the headline and the second sports reference in this otherwise serious arts critique. I divided The Lyric Stage Company’s production of “Avenue Q” into two halves — which is fitting, because there is an intermission, after all.

If you haven’t heard Erica Spyres sing — and I had not until last night — then scoop up one of the last available tickets and go see “Avenue Q” if only for that reason. And there are plenty of other reasons.

In the first act, Spyres completely steals the show puppeteering the female lead, Kate Monster, and the sexy foil character, “Lucy the Slut.” As Kate Monster, Spyres puts forward the perfect girl-next-door voice, both singing and acting. But Spyres really shows you something toward the end of the act, as the Lucy character comes on stage to wow all the gentlemen of Avenue Q with her singing and Muppet boobs. This is supposed to be the small, off-Broadway production, but Spyres shows she can hang with the best of’em. She croons a sultry, sexy melody — if you’ll pardon the sexy reference, knowing she has her hand up a Muppet’s ass. Then Spyres goes right back into “Kate mode” without missing a beat. She is something special, and if you’re new to the theater scene, you might want to highlight her name in the playbill and look for it in the future.

At the end of the act, during “There’s a Fine, Fine Line,” Spyres gets her solo and you almost believe she just got dumped and is going through the stages of depression that go along with it. If you look at her, you forget there’s a Muppet. If you look at the Muppet, you can’t forget about her, but you believe that Kate Monster is singing to you.

That’s amazing, considering that neither Spyres nor her co-stars, John Ambrosino, Elise Arsenault and Phil Tayler are professional puppeteers, though Ambrosino might have the most experience.

Ambrosino plays the lead character, Princeton quite well, but I actually thought he was better with his second character, Rod (the closeted gay “Bert” parody). He really showed something with the song “My Girlfriend Who Lives in Canada,” and he sold the Rod character’s angst and frustration.

The final puppeteer, Arsenault, was under-utilized, but that’s no fault of her own or of the company’s. The show necessitates a fourth puppeteer but doesn’t let that person shine on their own. About half the time Arsenault was on stage, she was holding a second arm for a live-hands puppet or voicelessly acting a character like Kate Monster, while Spyres (holding the Lucy Muppet) voiced Kate Monster from afar. 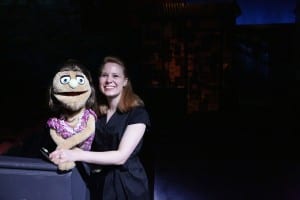 Arsenault maximized her vocal opportunities, however. As the female Bad Idea Bear, her pitch was perfectly annoying without actually bothering the audience. Now, sometimes companies do actually want to bother the audience. You’re left with a hint that Arsenault has a lot under the hood, but even as a Bad Idea Bear, she shares the stage with Taylor as the Boy Bear. She also showed range with the rough-voiced Mrs. Thistletwat (yes you read the name correctly). It’s two supporting roles, and I give her credit.

Avenue Q is a marvelous musical and a generational commentary. The 2004 Tony Award-winning Broadway musical has plenty of legs. I’ve seen it in massive theaters and stages many times bigger than the Lyric, but I gained new appreciation last night. The Lyric Stage puts on an intimate show that everyone in the audience feels connected to. A lot of that is a credit to producing artistic director Spiro Veloudos. Veloudos also warmed up the crowd, introducing the show at the beginning and drawing his own laughs.

I knew there was a reason why “Avenue Q’s” run was extended twice, with seven shows added this week, running up to July 1. I set out to find out why it became the most-attended performance in Lyric’s history. Now I know.