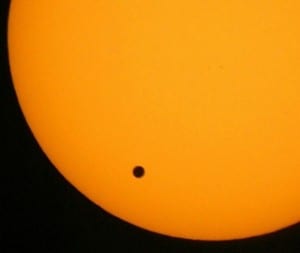 Unless you’re planning on being around in 2117, June 5 marks your last chance to see Venus transit the sun.

The second planet will pass directly between the Earth and the Sun next week, and it will be a spectacular astronomical sight, assuming you are equipped to view it.

It is a unique event, on par with a comet’s appearance. The Washington Post reports that schools and museums (and even the crew of the International Space Station) are time out to view it.

As is always the case, don’t stare directly into the sun, kids. You’ll need special glasses to view the spectacle, unless you want to go blind.

Venus will transit Tuesday afternoon for the Western Hemisphere and Wednesday morning for the Eastern Hemisphere. It will look like a small dot going across the sun — duh.