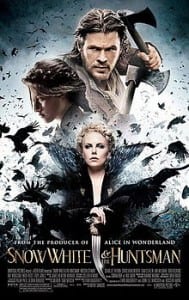 It’s not a good sign when you leave the theater thinking about all the ways you could have easily changed what you just watched to make it better.

I spent most of “Snow White and the Huntsman” thinking these thoughts. How I would change a line here, a scene there. How I would have re-edited the whole thing so the action scenes were not all in self-indulgent slow-motion. How I would have re-cast Snow White and given it to an actress who didn’t think that all you had to do to convey intensity was flare your nostrils. How I would have used actors who were actual little people to play the dwarves, rather than have poor Ian McShane stand in a ditch next to Chris Hemsworth during shooting. Which is seriously, unforgivably distracting.

But the creators of this long-winded, if well-intentioned little opus did not do any of these things. They cast Kristen Stewart to hold our attention for two hours, and all the action scenes look like “300” with a darker filter. And so goes the biggest disappointment I’ve had this year.

The movie’s tagline “This is no fairy tale” is pretty much a misdirect, as the story is a pretty faithful recreation of the Grimms’ fairy tale. An enchantress bewitches a king, murders him, and imprisons his daughter. When she comes of age, the queen realizes her beauty is a threat, and seeks to have her killed. The princess escapes and flees through a fearsome wood. The queen sets a huntsman after her to bring her back. But the huntsman doesn’t have it in his heart to kill her, and instead lets her go to be found by a bunch of dwarves. The only change to the plot seems to be that the huntsman gets a much bigger presence in the form of Hemsworth (henceforth to be known only as The Hair).

I admit I’ve never understood Stewart’s popularity, finding her performances devoid of affect and feeling. She never gives you an idea what her character is thinking, or even if her character is thinking. Her characters don’t experience things, or cause things to happen; rather, events simply seem to flow around them like wind. Her Snow White is supposed to be a woman which men bow to, and love, and stake their lives for, but Stewart seems to be there almost against her will, a petulant teenager forced to get up for school.

If Stewart displays too little affect, the vacuum is more than filled by Charlize Theron, acting her pants off as the evil queen Ravenna. Now there’s a leader of men. Theron appears to have graduated from the Alan Rickman School of Acting- she swills each word around in her mouth for a second before exhaling it like cigarette smoke. Her performance, as what is basically an embittered old woman who’s decided to work out her grudges by taking over the world, is frequently captivating to watch. It’s overwrought as all hell, but at least she seems to be having a good time.

And ahh, The Hair. I don’t know if The Hair can act. I don’t really care. I know his eyes can sparkle, and he can have awesome biceps, and he can excel at rugged handsomeness. The Huntsman has a back story but I couldn’t really hear what it was over the sound of his eyes asking me to dance. Something about a dead wife. Whatever.

In a few of the scenes, there is a quiet and meditative aspect that’s rather refreshing. This is owed, I think, to Hossein Amini, who became the most aesthetically controversial writer in Hollywood by penning the strange and wonderful “Drive” last year. A particularly beautiful scene involves the two protagonists stopping at a fishing village populated only by women and children (the men, of course, have all gone off to war). It’s a hauntingly honest sight into what it must have been like in the Grimm brothers’ time- when the men all leave, what happens to the women who are to make do, to protect themselves as well as possible, and wait for their husbands’ bodies to wash up on the shoreline?

But for the most part, this debut by director Rupert Sanders is every bit a freshman effort. He falls back to the common directorial crutches: voiceover, slow-motion, weird colored filters to convey mood. The action scenes are frankly a disgrace to the art, alternately dragging, over-fixating on one shot, then speeding up until the whole scene is a blur. And there’s a scene in an enchanted fairy hollow that is just hilariously terrible.

The shame is that the opportunities were there. And they were myriad. Fairy tales are lasting in part because they are endlessly customizable. They can be expanded and translated and mutated in a thousand different ways to resonate with the populace they currently serve. There’s evidence that Sanders at least partially tried to convey that. In one of the few scenes that works, the princess careens into the Haunted Forest. Branches tear at her hair and her clothes, limbs and earth are transformed into creeping snakes and insects and leering, unmerciful eyes. The scene is cribbed almost entirely, obviously, from Disney’s “Snow White and the Seven Dwarves.” I remember the scene of that escape terrifying me as a child, consuming me with a sense of being lost and alone. That primal fear comes through in this rendition as well. It’s just a pity is had to be the one bright spot in an otherwise dark and tiresome exercise.