The sneak peak at the latest issue of Game Informer is giving us more than a look at what’s on the cover, it’s giving us a big heads up as to what Microsoft has 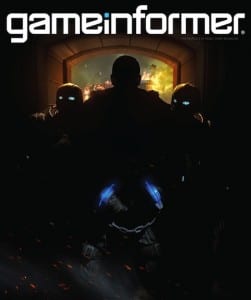 up its sleeve for next week’s E3.

No one is saying if it’s Gears of War 4 or a new standalone title, but the image which is partially blacked out features two cog soldiers escorting someone in chains. But who is it? And why are they there? We’ll find out next week Monday at 9:30 AM PST during Microsoft’s Press Conference, which you can watch right here on Blast.

Sources point to People Can Fly, the Epic Games owned studio who hasn’t worked on anything publicly since 2011’s criminally under-appreciated Bulletstorm being involved in the development of the new game, as the studio’s creative director was quick to tweet the cover image and his excitement for the project to become public; “Look at it. LOOK. AT. IT. RT @GI_AndyMcJuly cover reveal/tease: The Next Gears of War: http://bit.ly/JTOxss.”

Gears of War creator and Epic Games director Cliff Bleszinski has spoke about his interest in exploring the life of Adam Fenix, the father of  series main character Marcus, who was missing throughout Gears 1 and 2, but was an integral part of the Gears of War 3 storyline.

Be sure to check back with Blast for all of the information regarding this and all of the other E3 announcements all throughout next week’s big show!