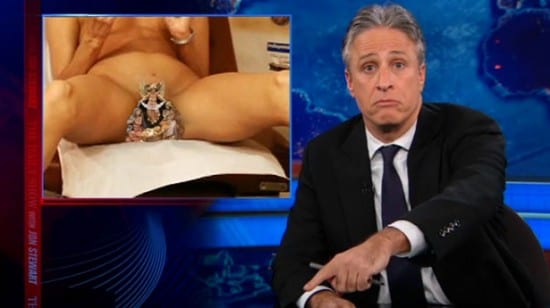 Jon Stewart ruffles the feathers of Christians and Delta Air Lines with this doctored image.

Delta Air Lines does not want to do business with Jon Stewart.

After a segment that includes a Photoshopped image of the nativity manger stuck between a nude (implied) woman’s legs, the company cited “discrimination” as their reasoning for pulling their ads from Comedy Central’s “Daily Show” program earlier this month.

Delta Air Lines spokesperson Leslie Parker detailed their stance in a statement, “Delta doesn’t discriminate nor do we condone discrimination in regard to age, race, nationality, sexual orientation, religion or gender.”

Parker justified the decision further saying, “We’re always re-evaluating our advertising opportunities and updating our strategy in an effort to reach our desired audience.” It would appear that desired audience is Christians, who might find the crude placement of the religious symbol offensive.

Before Delta’s announcement, The Catholic League for Civil and Religious Rights had spent weeks pressuring Stewart for an apology. They also demanded that advertisers, including Delta, send a message to the show and its host by withdrawing their commercials.

Catholic League President Bill Donohue even targeted Kellogg’s, urging supporters to boycott the company because they declined to remove their TV spots. Additionally, Donohue sent a letter to Viacom, the corporate parent of Comedy Central, expressing his grievances.

You should be as offended as we are,” the letter said. “But if you are not, consider a picture of your own mother inserted there instead. Perhaps you now understand how the 80% of the nation that is Christian feel.” The letter went on to say, What Stewart did wasn’t a joke. It was hate speech. We could have pressed for him to be fired, but we did not. All we want is an apology.”

Stewart’s rebuttal? He’s made no official statement, but he did reference the Catholic League crusade against his joke in a standup routine he did in Florida.“I’m not going to censor myself to comfort your ignorance.” Comedy Central has thus far made no comment.

Obviously, to make an informed decision about whether the particular imagery Stewart used qualifies as “hate speech,” one requires further context. Watch the video below and decide. Did Stewart cross the line? In trying to defend women’s outrage—a so-called “war on women”—over pervasive legislation that they justifiably believe has restricted their rights, did he go too far?