I remember when my mom and I would go to the supermarket together she would always tell me to make sure the eggs and bread were the last things to go into the grocery bag. She would never trust the bagger, no matter how experienced he or she seemed, and would always bag some of the more delicate items herself. “You don’t want them to get crushed,” she would tell me, and her advice still rings true to this day.

It’s no surprise, then, that playing Bag It! on my iPhone makes me remember these childhood supermarket trips. Bag It! takes the mundane task of bagging grocery items and turns it into a game that will test your organizational and puzzle-solving skills. I had a chance to chat with Amos Marvel, Hidden Variable Studios Chief Operating Officer, to learn more about this mobile title and get some insight on what it’s like to be a growing independent game studio. Bag It! is truly a labor of love, and as you will see, the team’s hard work has definitely paid off.

Bag It! has a few different modes that revolve around the same concept: bagging grocery items. Its groceries are really the stars of the game and come with their own personality and subtle backstory. Gentlemanly Sir Eggward the egg carton, for example, has a rivalry against the French bread Crusteau, and the grumpy milk carton Spilt has a crush on happy-go-lucky Sunshine orange juice. Their colorful designs might make you forget that they started out as mere Tetris blocks. “Our senior artist is extraordinarily creative and he was doodling one day and started adding expressions to them to add a little flair,” says Amos. This splash of life influenced the “design, humor, and presentation of the game.”

Each item weighs differently and if you put Seedy the watermelon on top of Sir Eggward, a timer will start ticking next to him indicating how much time you have left until he is crushed. Crushing groceries is a bad thing, at least in the game’s Standard mode. This mode introduces you to each character and walks you through the game’s mechanics and features. Some Standard levels are timed and others have you using multiple bags. If you crush more than three grocery items per level, you’ll need to retry and start it over. The key to clearing each one is to rearrange each item in ways that make them all fit in the bag without crushing one another.

These modes aren’t available right away, however. The game makes use of a rewards system and collecting medals in each level unlocks these additional modes.  Each level has two medals to collect with different requirements such as bagging items in under 10 seconds or by placing certain groceries next to each other. Aside from these medals, achieving these bonuses or clearing a stage quickly enough gives you a score out of three stars that is recorded in the game’s online leaderboards. Not only does the game keep you coming back for more, but serious gamers will want to improve their score and collect the game’s most difficult medals too. I sure did.

Bag It! is Hidden Variable’s first game and truly represents the company’s vision that is, as Amos puts it, “to reveal the fun and fantastic in our everyday lives.”  The inspiration for Bag It! came after watching two children playing together in an airport with everyday items around them. “There’s always fun around us if we choose to see it,” Amos says, and that can clearly be seen within a few minutes of playing Bag It! I mean, when was the last time you made a game out of bagging your groceries?

Indie Insight
The foremost piece of advice is to be realistic with your expectations. The mobile market is huge, with a lot of competition, and it can take a lot of time, money, and often quite a bit of luck to make something that can pay the bills. While it’s nice to think that your title will become an instant hit, games like Tiny Wings and Temple Run are huge exceptions.

We recently read an article that stated 59% of apps don’t generate enough money to break even on development costs and 68% earn less than $5,000 on their most successful game. Those should be very sobering statistics to anyone thinking to enter the space. There are opportunities out there, but it isn’t easy money at all. That’s not to say that you shouldn’t give it a go, but it’s important to go in with both eyes open and know what you’re getting into.

As a quick additional note, don’t be shy in terms of reaching out to other developers to get their suggestions and advice. We’ve been so encouraged by how open and supportive the indie community has been for us, and we’re always eager to reciprocate wherever possible. It’s a tough road, but you’re never on it alone.
– Amos Marvel, COO, Hidden Variable Studios 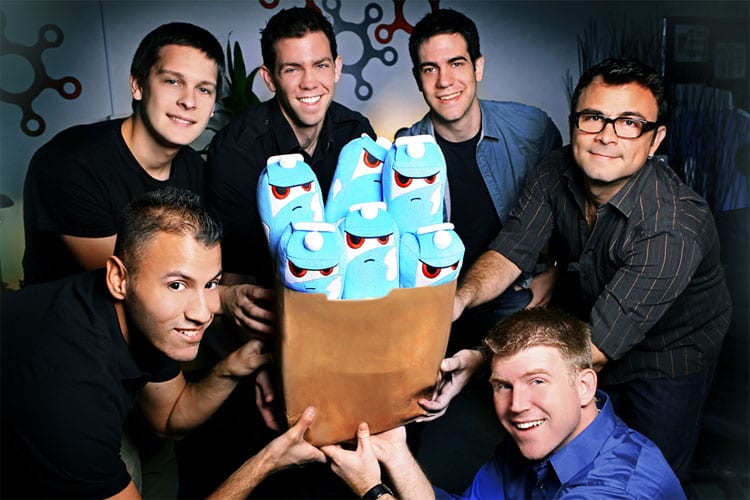 After doing extensive research on the current demographics of mobile gamers, Hidden Variable first focused on creating a game that was “both deep yet accessible enough that our parents, grandparents, and children would want to play,” says Amos. “Much like Angry Birds, our audience is very diverse and we have gotten all sorts of correspondence from fans of all ages.” The game was even translated into Spanish, Chinese, Japanese, Korean, Italian, German, and French to increase its exposure internationally and has seen favorable reviews by critics since its launch last year.

Players have learned about Bag It! through deals and features on a given marketplace and through friend referrals. Its positive reviews have certainly given the game great exposure, but as Amos puts it, “a game needs to stand on its own, growing its own audience with or without major press, in order to be successful in the long run.”

Hidden Variables was founded in 2010 when its three founders got together and combined their talents, savvy, and experience to start their own company. The growth of mobile gaming, the ease in entering the mobile industry, and the draw of being able to publish their own games were things the independent studio couldn’t pass up. The team consists of professionals with backgrounds creating console games for major video game companies like EA, THQ, Insomniac, and Liquid Entertainment that gave them a slight advantage in the mobile games market.

“While there are many similarities in development between consoles and smartphones, there are also some pretty significant differences. It’s not an apples-to-oranges comparison but more like a Granny Smith versus a Red Delicious.”

While mobile titles may benefit from being developed, distributed, and updated quickly in comparison to console titles that take years to make, indie studios need to work hard to give their games exposure. When developing a console game for a specific publisher, the publisher provides payments throughout the development cycle and handles all the marketing. But for an indie mobile game like Bag It!, the developer is on its own.

Established companies have certain cultures built in infrastructures, systems, and processes, and while some developers may like the stability that comes with this, others like Hidden Variable, love being the decision makers, creating their own IP, and making the tough decisions surrounding all of the elements that come with it.

“When you have a blank slate, there is a great amount of autonomy and freedom, but with that comes a great deal of responsibility,” says Amos. “You have to market the heck out of it with very few resources to rely upon besides yourself and your team. It’s definitely been challenging at times and we’ve learned a LOT, but nothing was more satisfying than releasing Bag It! out into the world and hearing about so many people enjoying it.”

Amos also told me that the key to a game’s success is the audience its reaches. Despite Bag It! success on mobile platforms, this is only Hidden Variable’s first title after all. Before creating their hit titles, developers like Rovio and OMGPOP, like most companies, had to release dozens of other, less successful, titles before reaching the success and fame they now have. Amos mentioned that his company is looking at different platforms for their games such as Steam and browser-based solutions, but they will never force an IP onto a platform just to make money. 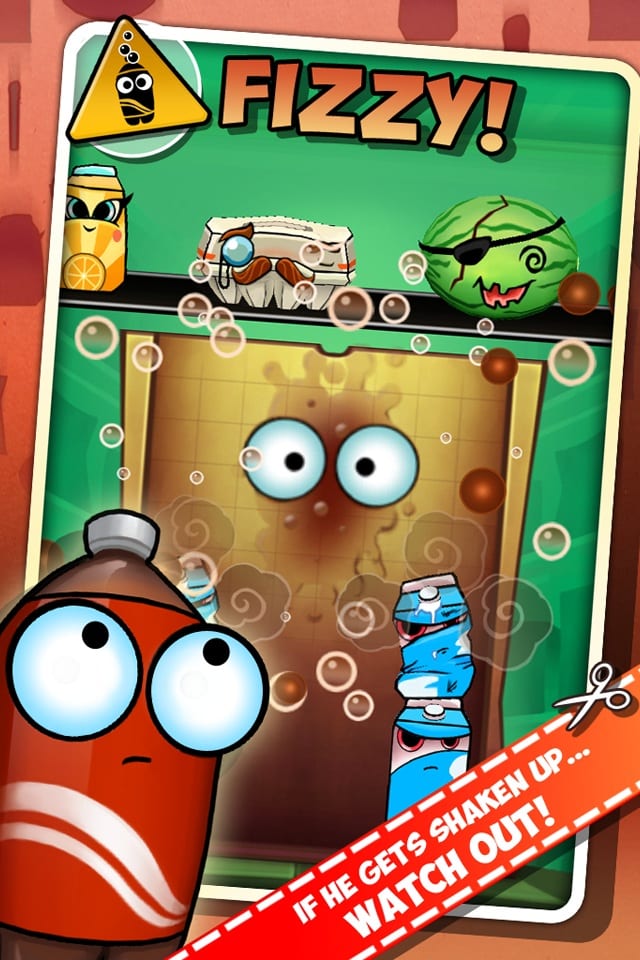 While Hidden Variable is busy working on its next IP, it hasn’t forgotten the emails, calls, and forum posts that have asked for more levels and characters in Bag It! The game’s latest update is available today for free and gives players 16 new levels, additional achievements, and a brand new character to play with. Fizzy the soda bottle may be shy at first, but he adds his explosive personality and a new twist to the game’s Endless modes. If you move him too quickly or shake him up on purpose, he will explode and take out all nearby groceries with him.

This is just one of the many updates in store for the game. Amos says his team has a list of additional ideas like characters, new gameplay mechanics, and different modes that will be implemented as players ask for it. Currently, the studio is in talks regarding licensing and merchandising, so you’ll soon be able to get your hands on your very own Spilt plushie, T-shirt, and other goodies.

Playing through Bag It! and then speaking to Amos about its development and his company’s theme of playfulness with the world around us made me realize that here was an indie studio that had poured so much love into its first title, stayed true to its vision, and ultimately reaped the rewards. Hidden Variable Studios is an indie success story, and I am sure many more great games will follow.

“It’s exciting, stressful, exhilarating, and surprising all at the same time,” says Amos. “We wouldn’t trade it for anything.”

Bag It! is available for iOS and Android/Google Play devices. It is also available on Amazon Kindle Fire and Barnes & Noble Nook Color. The game is currently on sale for a limited time for only $.99 on all platforms.

The goal of our Indie Insider column is to spotlight independent video game developers and showcase the games they’re making. Each installment will feature a different developer, game overviews, and industry tips and advice. Want to be in the spotlight? Email giancarlo [dot] saldana [at] gmail [dot] com.