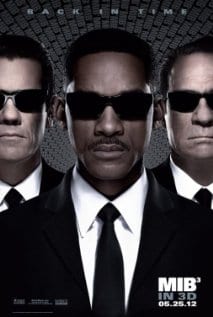 Want to feel old for a second? Just think about the fact that “Men in Black” came out almost 15 years ago.

1997. Bill Clinton’s second term. “The English Patient” is Best Picture. Princess Diana and Mother Theresa shuffle off this mortal coil in quick succession. And Will Smith and Tommy Lee Jones fight aliens in New York City. But 15 years is a long time. “Men in Black II” was a sad misstep, messy and ill-conceived, and really how long can Smith play the wisecracking foil to Jones’ Elvis-loving curmudgeon? I did not think that time would be kind to the buddy government agents.

But time is the primary concern of writer Etan Cohen and director Barry Sonnenfeld in this third installment of the franchise. In many ways this movie has the exact same flaws as the sequel: it’s got a half-baked plot, editing with no sense of narrative flow, lots of computer-generated alien guts, etc. But stepping back from poorly-executed details, this is actually a highly entertaining little tale that has a lot to say about how we change over time, how we don’t, and how our friends would see us if they heard the stories we are afraid to tell.

Of course this is all coming out of a story about a crazy alien who escapes from moon prison to go back in time and kill the man who took his arm. Seriously, that’s what it’s about. Jemaine Clement (half of the delightful musical duo Flight of the Conchords) is marvelous and actively terrifying as Boris the Animal, an insectile, spear-shooting creature who goes back in time to kill Agent K (Jones) before he has a chance to shoot his arm off and imprison him. The only person who realizes that time has shifted is Agent J (Smith), who follows Boris to 1969 to save his partner’s younger self- played, perfectly, by Josh Brolin, because who else would play a young Tommy Lee Jones?

It’s not a great plot. There’s a lot that’s skimmed over- including time-travel rules, which might not be sexy but are incredibly important when you’re dealing with this kind of plot. And Emma Thompson is criminally underused as the duo’s new boss Agent O. There’s too many aliens of varying sizes and shapes, which all get lost in the shuffle.

Those who know their history will recognize 1969 as the year of the moon landing, which both has an integral role in the plot, but really serves as the moment humanity became traveling members of the universe. There are other moments in time that are sanctified in the movie, like the moment the Mets won the World Series, or a magnificent party at Andy Warhol’s Factory. But these are not nearly as important as the moments that define K’s life, and changed him from a relatively cheerful, open-hearted country soul, into the bloodhound-eyed, closed-off curmudgeon that J knows and loves.

It’s also funny, sometimes. There’s a great part at Andy Warhol’s party, as well as the franchise-running gag about the stories J makes up after wiping someone’s memory, generally in the service of teaching them a life lesson. But all in all, the film is relatively subdued and surprisingly adult-oriented. There are fewer smart-ass aliens (the talking pug does not appear, though he is reverently notated throughout the movie) and though there are gross alien guts, I would say there’s a smaller ratio than the previous movies. Cohen replaces these with higher-brow gags- like the fact that J is able to steal a car in 1969 by pretending to be a bellhop at the Roosevelt Hotel (he’s wearing his Men In Black uniform of black suit and tie, but everyone still assumes he’s the help).

The amount of things that need to line up to create a moment that changes your life, your friends, the entire turning of the planet- it’s a trite message, perhaps, but what of it? It’s the message that lets you forgive the fact that it’s the third movie of a 15-year-old franchise made only because of the revenue it would create. The commercial can be genuine. You should never view anything as a lost cause.