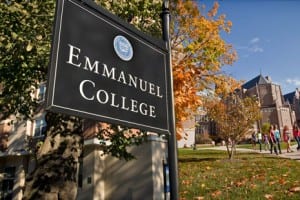 Sofia was still in her blue Harvard Maintenance uniform, her hair tied back, as we scuttled through the halls of an Emmanuel dorm in search of a private place to chat. She was unsure what the retaliation might be for speaking out. We settled for an empty kitchen where Sofia described what it’s like to clean up after college students, while not being paid enough to live without food stamps.

As an educated Nurse Practitioner in Central America, Sofia knew that immigrating would also mean shedding her service career. “I didn’t want to come to America,” she said. “I knew I would have to do manual labor.”

But, eventually she didn’t have a choice. “There was a war going on in my country,” Sofia said. “It was so dangerous.”

So her husband, who had been in the states for 30 years, helped her navigate the immigration process. It was an ironic gesture for a man who was living with his second wife in New York, something Sofia didn’t know about until she stepped off the plane.

Eight years later, Sofia has warmed up to America. Her constant smile widens when she shyly slips into the conversation that she passed her citizenship test last year.

But becoming a US citizen didn’t allow Sofia to reclaim her nursing credentials. Instead, she continues to work for Harvard Maintenance as part of the contracted cleaning staff at Emmanuel College. It’s the same job she’s had for seven years, but the work has increased recently.

“The cleaners [at Emmanuel] have too much work,” Sofia said. “We’re running. Especially when someone vomits, we have to work quickly.”

According to Sofia, the team that cleans Emmanuel has lost three workers recently. “Two of them got sick and had to leave and the third found another job,” she said. “But there are no other workers to replace them, they just add to our workload.”

“I’m not aware of any issues with workload there,” Duffy said. “If that’s happening they should talk to their supervisor.”

The part-time cleaners at Emmanuel have from 9:00 am until 1:00 pm to wash away the remnants of a night, or sometimes a weekend’s worth of college shenanigans. It’s left Sofia with a collection of nose-wrinkling experiences.

“Let me tell you a story about hard work,” she said. “Someone smeared poopoo all over. It smelled very bad.”

Sofia chuckled as she described the image of herself cleaning human feces. “I had to wear a mask. I would spray disinfectant, then run away to take a breath, then come back to clean it.”

There are a few full-time cleaners working for Harvard Maintenance at Emmanuel, but most are part-time, which means minimal benefits.

“They give us small insurance,” Sofia said. “But it doesn’t cover anything.”

So, according to Sofia, many of her coworkers can’t have time off when the manual labor takes its toll. “All the women here are sick,” she said. “Many of them have arthritis because so much of the work is with their hands.”

Sofia and her daughter both work and take classes, making just enough to get by with the help of food stamps. Her other daughters are professionals in her home country; one is a lawyer and the other a college professor. Sofia is proud of their success, and feels lucky that she doesn’t need to send money home.

But, she was quick to recognize many of her colleagues who aren’t as lucky. “My friend has four young kids to support,” Sofia said. “But she has such a big heart, and is the best cleaner. She should be here to tell her story.”

Sofia says she is speaking up for her friends because they view her as the leader. “I want to fight for them,” she said. “We just want more hours and benefits.”

Sofia knows that what she’s fighting for is not an unreasonable request for college maintenance workers. In past conversations she pointed out that students at Harvard University worked with their cleaning staff to demand a transition from contracted to university employees. She envisions something similar at Emmanuel, where the security team recently made the same move.

“We had the option to go with a cheaper bid,” said Emmanuel’s Assistant Vice President of Operations, Kristen Conroy. “But we picked Harvard because they proposed the most fulltime workers. We don’t cut costs at the risk of human beings’ care.”

So, Sofia remains patient with the institution. “We like it here, the school isn’t bad,” she said. “And the union helps us a lot. Lately it’s just been a lot of work.”

Sofia’s name was changed and country-of-origin hidden to protect her identity.