Adults who want to be artistic but don’t want to color inside the lines of a Disney princess, look no further. The same San Francisco Bay-area sisters who published the fashion-themed adult coloring book “Color Me Trendy” in 2010 are publishing the book’s sequel, “Color Me Trendy: A Trip Through the Decades” this June.

For the sequel,  sisters Rada, Ljubica and Jasmina Radmanovic researched fashion from each decade, starting with the 1920s.

“It required a lot of research with events that happened in the decade and the important women in each decade, in addition to the textiles and fashion of that decade,” says Jasmina.

There were times during the research when Ljubica didn’t really want to relive outfits from the past. “My sisters had to convince me that it was just part of the decade, but it’s embarrassing!” she says.

The sisters focused on the empowerment of women during each time period and what historical occurrences were going on in each decade.

“We wanted to push the fashion that was happening at the time but also the mood and the feel about the women and history of that time,”  says Rada.  “We lose a little bit if we don’t know the history behind why people dress the way they did. We wanted the wording to connect to the fashion.”

The inspiration for the “Color Me Trendy” books came to the sisters as they wondered why there weren’t more sophisticated coloring books. 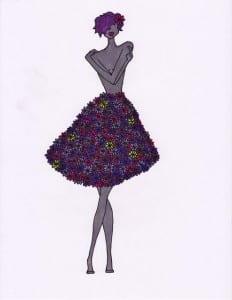 “We noticed that subjects were always superheroes or princesses, and we thought we should create a coloring book with a more mature theme,” says Jasmina.

Just a few months after “Color Me Trendy” was published, celebrity blogger Perez Hilton made an effort to bring the book into the spotlight. He featured “Color Me Trendy” on his fashion blog, www.CocoPerez.com, and wrote that he thought the idea was “pretty cool.” The coloring book was also featured on the “Today Show” segment “Bobby’s Buzz.”

“These were the first places that got us some exposure,” says Jasmina.

Each sister, in her own unique way, contributes to the coloring book. Rada is the poet of the family, and excerpts of her poems are scattered through the pages of “Color Me Trendy.”

“It’s a matter of all getting together and thinking what idea we want that matches up with the drawings, and I kind of put it together in words,” says Rada.

Ljubica, the youngest sister, designs the drawings for the coloring book. She studied at the Paris Fashion Institute and has a degree in apparel marketing and design at Sacramento State University. Jasmina is the creative director of the book, and says that they all “put it together and work on the marketing and distribution.”

While waiting for the publication of “Color Me Trendy: A Trip Through the Decades,” fans of coloring and fashion can download the iPhone/iPad app for the coloring book, which was released in March.