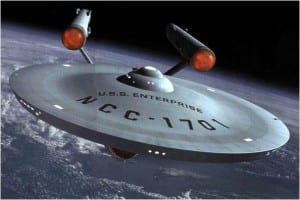 One Trekkie who grew up to become a systems engineer is hoping to bring the Starship Enterprise into the 21st century.Through a website launched this week, a shadowy figure going by the name BTEDan has proposed a 20 year outline to build a full-sized, ion-powered version of the famed fictional ship complete with 1G of gravity on board.

The Christian Science Monitor reports that this “Gen1” Enterprise could get to Mars in 90 days, to the Moon in three, and “could hop from planet to planet dropping off robotic probes of all sorts en masse – rovers, special-built planes, and satellites.”

The site — buildtheenterprise.org — showcases conceptual designs, ship specs including a gravity wheel to retain the classic shape while making the craft functional,  and almost every other detail imaginable, the newspaper says, down to the rather important problem of how to fund such a project in an era where government officials are taking a “been there, done that” approach to funding NASA and space travel.

Though in a quick perusal this fangirl was surprised to find that the creators did not have a thorough editor. What I lack in engineering know-how I make up for in basic fan knowledge. “Live long and proper.” BTE Dan writes on the FAQ page. Come now, Dan. You can hatch an entire $1 trillion plan to build Scotty’s beloved ship, but you bungle Spock’s signature phrase?