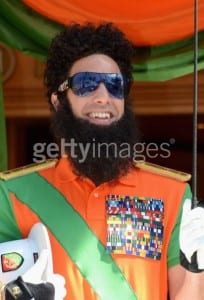 The Dictator arrives at the Carlton Hotel during the 65th Annual Cannes Film Festival on May 16 in Cannes, France. (Photo by Andrew H. Walker/Getty Images)

The Boston public had a rare chance to support the great Republic of Wadiya yesterday, as AMC Boston Common Theater hosted a paid sneak preview of film “The Dictator.”

Paramount Pictures credited the preview to an “uncharacteristic stroke of generosity” by the film’s title character, General Aladeen of the Republic of Wadiya (played in the movie by Sacha Baron Cohen). The General’s “Virgin Guards” were on hand to greet supporters and offer complimentary snacks, t-shirts, posters and photos.

The film, which opens today, centers on Aladeen’s trip to America to ensure that his country can remain “lovingly oppressed” and free of democracy. Cohen’s character has made several public appearances in preparation for the film’s release, including on the 2012 Academy Awards red carpet when he accidentally spilled the ashes of deceased North Korean dictator Kim Jong-Il on Ryan Seacrest.