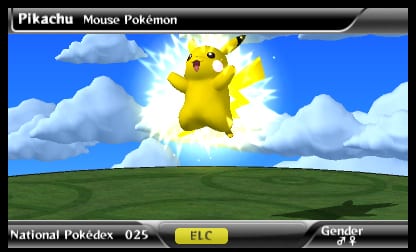 Revealed at last month’s Nintendo Direct webcast, Pokémon AR Searcher, now known officially in the US as Pokémon Dream Radar, will let players use their 3DS cameras to search for Pokémon in the real world. The game is an AR shooter that will also give players access to new Pokémon like the recently revealed Sacred Beast Formes of Tornadus, Thundurus, and Landorus and transfer them to their games.

Pokédex 3D Pro is another upcoming eShop title that will give 3D owners a full working Pokédex with information on the over 600 species of Pokemon.

These two titles will coincide with the release of Pokémon Black and White Version 2 and be released this fall in the US. Available only on the 3DS, these two titles will give 3DS owners an advantage even though the upcoming Pokémon sequels are actually DS titles. No price was announced, but do recall that the current Pokédex 3D was offered at no cost to 3DS owners when it first launched last year.