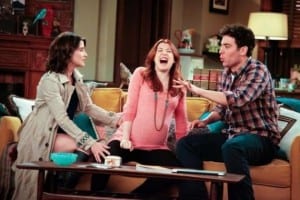 (SPOILER ALERT: DO NOT READ IF YOU HAVEN’T SEEN THE FINALE)

Last night’s hour-long season finale of “How I Met Your Mother” featured a birth, an engagement, and the shocking-reveal of a future wedding between Barney and (gasp!) Robin. After seven seasons, HIMYM writers just can’t seem to move on from the Barney-Robin-Ted love triangle, and boy am I tired of it. The finale wasn’t a total bust though, with Lily finally giving birth to Marvin WaitForIt Eriksen and Ted driving off into the sunset with Victoria (wedding dress and all). In fact, I’d say that the episode as a whole was rather satisfying except for that last 10 seconds, which left a bitter taste in my mouth.

Everything seemed to be going so well as the episode began. Lily was finally having her baby after what felt like an eternity of pregnancy, and Marshall was able to bound into the delivery room just in the nick of time. After Marvin was born, Robin and Ted talk in the waiting room and have a long-awaited talk that patches up their fractured friendship. Not only do they set things straight, but Robin encourages Ted to chase after Victoria (yes Ted, please do!). After Ted’s out-of-the-blue phone call to Victoria, she agrees to meet him at MacLaren’s. When they meet up, Victoria is in a wedding dress and explains to Ted that she’s about to get married. Ted’s got a tough decision to make, but in the end he chooses Victoria.

Meanwhile, things with Barney and Quinn are getting better too. After the trip to Atlantic City, Barney returns home to find that Quinn hasn’t left him as he feared. They take a vacation together, and in the airport Barney (rather extravagantly) pops the question. Quinn says yes, and it seems that Barney’s playboy days may have finally come to a close. And this is where I wish the episode had ended, but…

Barney and Quinn go to Lily and Marshall’s apartment to tell them the good news. As Lily, Quinn and Marshall head into the baby’s room to change his diaper, Robin and Barney are left alone. Robin looks like she’s about to cry even though she claims she’s happy for Barney and Quinn. Oh no, not this again, pleeease don’t fall back on the Robin/Barney/Ted triangle again, please! But of course, in the closing moments of the finale, we flash ahead to the wedding and who is it marrying Barney? Robin, not Quinn.

After seven seasons of Robin bouncing back and forth between Ted and Barney, and a number of fake-outs and almost getting back together with them, I am so utterly tired of the love triangle between the three of them. I’ve lost count of how many times Ted has declared his love for Robin, then regretted it, then they almost get back together, then they have sex once but it’s a huge mistake, and so on and so forth. The same goes for Barney and Robin. I’m tired of Ted and Barney finding great girls that aren’t Robin, and then ultimately losing them because they still have feelings for Robin. Enough already! Can’t we all just move on? I’m tired of being led on by the HIMYM writers to believe that Barney or Ted finally found a great non-Robin match for themselves (or Robin a suitable non-Ted / non-Barney), only for the chick to get ditched five episodes later for – who else? – one Robin Scherbatsky.

Victoria is awesome, one of Ted’s best girlfriends throughout the series, so let’s hope to God that she sticks this time. I’m worried that once we get to that wedding scene of Barney marrying Robin, there’s still a chance that Robin will defect back to Ted and screw up a great relationship he was with Victoria or some other flavor-of-the-season. And I’m not looking forward to watching Quinn and Barney’s engagement crash and burn – I liked Quinn, she had a lot of spunk and didn’t take Barney’s crap. Still, I would have been okay with the “twist” ending of Barney’s bride not being Quinn if it had been Nora instead of Robin. Nora and Barney always had great chemistry, and the ending still would have been “shocking” without reverting back to the Robin problem.

Who knows what next season has in store for us, but here’s to hoping that Ted and Victoria actually work out and that the Barney / Quinn demise is quick and painless. I hope we get to that Robin / Barney wedding as soon as possible (maybe midway through the season) and that it goes over without any issues. Because sooner rather than later, HIMYM is going to be ending it’s run, and is it too much to ask that the characters enjoy a season without breakups and heart-break?