Developed by:Camelot
Published by:Nintendo
Genre: Sports
Platform: 3DS
Play it if: You’re a fan of Mario sports titles.
Skip it if: You don’t like collecting items you might never use.
[rating:3.5/5]

Let’s compare the Mario Tennis series to, well, a game of tennis. While the rules are the same regardless of what match you play, you won’t always be playing on the same court or against the same opponent. Mario Power Tennis, for example, introduced gimmicky features that were more harmful than helpful, but the game’s familiar controls were still there. Going back to their roots, Camelot and Nintendo have once again joined forces to give players a great tennis title, but they might have stripped it down a little too much.

[amazon_link id=”B007BGUGVO” target=”_blank” ]Mario Tennis Open[/amazon_link]’s new control system is perhaps the best in the series. While its predecessor emphasized the Power Shot that was flashy but often distracting, the shooting seen here is much more toned down and a lot more sophisticated. The different face buttons on the 3DS each correspond to a specific shot – slices are performed with B, topspin with A, lobs require you to press A then B, and so forth – and they also correspond to a colored panel on the touchscreen. During a match, the space where a ball is heading will sometimes flash one of these colors indicating that a Chance Shot can be performed. If you hold or tap the correct button or panel, your shot will be powered up and exaggerated, making it difficult for the opponent to predict where it’s going and also stunning him if he manages to hit the ball. You don’t always have to activate a Chance Shot or match the shot with the colored space that appears on the court, so this also adds a level of strategy to the game, letting you mix up your offense to keep your opponent guessing.

Chance Shots offer a balanced addition to the traditional game of tennis, and their presence doesn’t overpower any particular character either. You still need to rely on your own skills to win matches, but each character also has his or her own unique characteristics like in past games. Balls hit by tricky characters like Boo and Bowser Jr. will have unpredictable trajectories, and Power characters like DK and Bowser have two of the strongest serves in the game. 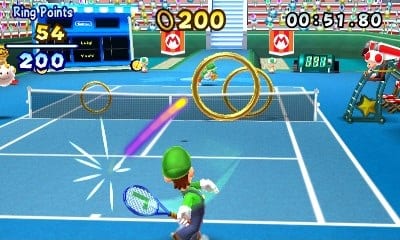 Your own Mii characters also can partake in matches and be dressed up in various costumes and gear that you unlock playing through the game’s Tournament mode. Each item has special properties that change your Mii’s abilities and will affect how he or she moves and shoots on the court. My main complaint is that an item’s stats are shown as a pie diagram that makes it difficult to see how much an item differs from another unless that difference is pretty significant. I could definitely sense a difference giving my Mii a different racket, but I feel like this Creation mode is mostly there for players who care more about what their Miis will look like instead of how they will play.

When not busy fidgeting with their Mii’s wardrobe, players can compete in Singles and Doubles Tournaments that each consists of eight different cups with three matches apiece. The first few matches start out ridiculously easy and take mere minutes to finish, but the final cups really do test your tennis skills. Aside from a sense of accomplishment, you don’t get much for winning every cup in the game. Characters only need to beat one cup to gain the special Star status that powers up their overall abilities and grants them access to the game’s four final cups, so the only real reason you’d replay Tournament mode is to collect the over 200 pieces of equipment the game offers.

If you don’t plan on using your Mii in a match, there’s really no reason to care about these items. Also, just because you unlock an item in Tournament mode doesn’t mean you automatically own it. Rackets cost money, and the only way to earn coins is to play through the other two modes the game offers: Exhibition and Special Games mode. Exhibition mode is essentially a free play mode that lets players decide on the difficulty of their opponents and the length of their games. 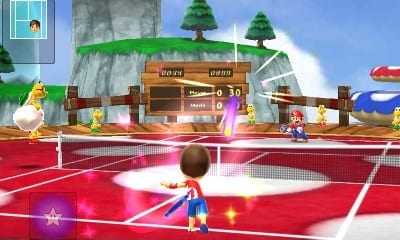 Special Games mode, however, is a lot more fun than the ones seen in past Mario Tennis titles. Games like Ring Shot test your speed and aiming skills outside a traditional game of tennis, and clearing through their four different difficulty modes unlocks hidden characters like Baby Peach and Dry Bowser – so again you may ask what the point of playing through Tournament mode was. Two of my favorites include Ink Showdown that has you returning balls and globs of ink and Galaxy Rally, a game that has you keeping a rally going while avoiding disappearing platforms on the opposite side of the court. I was also very impressed with Super Mario Tennis and how it blends tennis controls with Mario’s classic side scrolling adventure.

Likewise, there is nothing like playing an intense final match and hearing orchestrated music blaring from your speakers. It’s these added touches – even the crisp 3D graphics –that truly make the game a joy to play on the 3DS. The game also offers a Dynamic View mode that lets you tilt your handheld to give you a behind-the-shoulder camera angle with gyro controls. This optional mode also makes your character automatically head towards the ball, so it’s definitely geared towards beginners and younger players. Open also has a Street Pass feature that lets you play a game of Ring Shot or a quick match against players that you run into. More characters will also be available to download via QR code scanning, further capitalizing on all the features the 3DS has to offer. 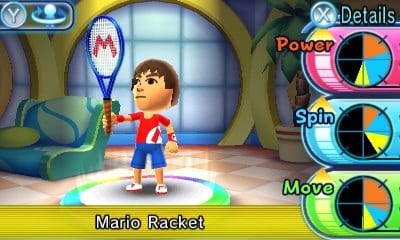 Like its predecessors, Open is also a multiplayer game. Local matches fortunately only need one game cartridge, and give up to four players the chance to play together and select from a full roster of characters. You can also play with your Friend List buddies over Wi-Fi, or search for random players too taking advantage of the same Nintendo Network that launched with Mario Kart 7, but the lack of a Community mode makes Open’s online offerings a lot less impressive. There is a monthly leaderboard that tracks your ranking, and you get medals for every opponent you defeat. I experienced next to no lag during most of my matches, and since the game pairs you up with equally skilled opponents – I assume determined by the medals they have – in your region, lag shouldn’t be a problem most of the time. Matches are short, so the game’s online experience may be fun, but it’s also rather brief.

What you get when you combine the various characters with the game’s user-friendly controls is a very polished game, but it’s a shame there’s not enough content on the actual cartridge to make the most of all these great additions. I spent almost 15 hours completing the game, unlocking all characters, and giving most of them Star status, but I started wondering what else I could do aside from collecting shirts for my Mii. Online matches are great, but are over too quickly. Don’t get me wrong – Open is a lot of fun, but I just wish there was more to the game than just increasing your Mii’s wardrobe.