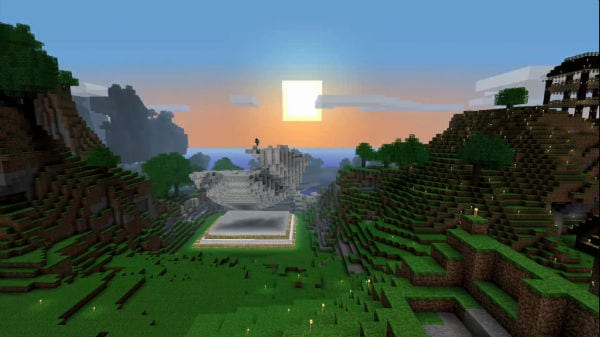 Notch’s wacky world-building adventure has finally arrived on the Xbox 360, bringing sprawling open worlds, hissing anthropomorphic time bombs, and a menagerie of other beasts to a brand new audience with cooperative play, leaderboards, and a bevy of features that should delight fans, both new and old.

Bringing Minecraft to consoles was certainly a fantastic move — functions that may have seemed difficult to understand for new players before or gamers primarily enjoying console adventures, unfamiliar with PC controls, have been optimized and simplified for console play.

Both creating worlds and exploring them feels natural and much like the sandbox-adventure game hybrid was built for the console in the first place. Whereas Minecraft on PC was quite often an intimidating and confusing experience — asking friends for help, viewing YouTube tutorials, etc. was usually a given if you wanted to progress. The XBLA edition is a quicker, more streamlined beginning with tutorials, helpful toolbars, and plenty of assistance to get things rolling.

From there, it’s easy to predict the backlash: seasoned crafters will claim this port is simply a “watered-down” copy, when that couldn’t be further from the truth.

You’re still able to choose which difficulty you’d like to submit yourself to, as well as variables that will determine the type of terrain rolled for your brand new adventure. The rules are still clear — as clear as they can be, anyway: keep safe from the various beasties that roam the landscape at night, and survive. All other rules and objectives come from you. If you wish to build an industrious empire that exists solely on a diet of pork and occasional delicacies, that’s your prerogative.  If it’s your goal in the world of Minecraft to create a gigantic slot machine powered by pigs, you can do that too.

Developed by: 4J Studios and Mojang
Published by: Microsoft Studios
Genre: Sandbox
Platform: Xbox Live Arcade
Play it if: You’ve been looking to get into Minecraft or need a new venue to exercise your addiction
Skip it if: You’d rather just play on PC without the XBLA version’s niceties.
[rating:4.5/5]

For those with less “interesting” ambitions, living to survive is the basest of options, eventually culminating (if you choose) in a battle within the Ender to rival all previous scuffles. The world is literally yours to shape as you see fit. There’s no option now for creative mode, in which there’s no pressure to stay alive, but the main mode of play can still act as such, if difficulty is set to “peaceful.” Monsters won’t populate, and you’ll still be free to roam, build, and destroy as you see fit.

The only limits to what you can create are those you set for yourself. You can chop down trees for wood, shear sheep for their wool, mine for ore, and even reshape entire islands around your own personal whims. With the Xbox Live Arcade version, you needn’t even rely on guesswork.

Say you gather plenty of wood and cobblestone but aren’t sure of what you can do with it. An entire network of submenus is available that automatically lets you know which materials are needed for, say, a sword or a pick axe, out of the items in your inventory — even a crafting table, if you haven’t built it already, and it will be crafted for you. It’s a much simpler and less tedious process than stopping to consult a Minecraft wiki on creation and allows more time to assemble shelter and some semblance of a plan for survival. All potential options of possible equipment are laid out for you.

You know what you ned and what you want to work toward, giving you more time to explore and establish your own settlement. While it does, in essence, remove some of the trial-and-error exploration and pioneering veteran players were subjected to, in an avenue like Xbox Live Arcade where the focus has been shifted to accommodate new players and multiplayer sessions, who wouldn’t want to spend less time tooling around, confused, when they could be double-teaming creepers and Endermen?

But even still, it isn’t a perfect beast — there is still a fair amount of solo exploration and tinkering required before all the puzzle pieces start falling into place. You’ll likely still need to consult one of the many online Minecraft resources for ideas on what to try next, where to go, or how to react in certain situations. With all the assistance available, there could even stand to be more, coming from personal difficulties when getting started in the PC edition. A primer on what type of shelter best suits your needs or what certain beasts are capable of would have been welcome additions.

But the built-in toolbars and tips go a long way to make any player comfortable, and so does the interface. All, barring content (villages aren’t found in-game, as well as other Minecraftian content pieces,) is as it is in the PC version, save for some unusually sluggish rendering of blocks off in the distance. In a way, this port feels a bit more comfortable, like a modern Wolfenstein or similar game in terms of visuals. Camera work is smooth, as well placing blocks (mapped to the triggers) — it feels effortless. There’s the simple pleasure of not having to turn down the graphics to accommodate your laptop or older PC. Everything just works, and swimmingly.

So too does local cooperative and online play. It’s an absolute blast to erect new civilizations, power through stubborn rock, and team up on pesky monsters with a friend, as easy as inviting another Xbox Live user to play, or hooking up an additional controller. Local couch co-op with my father was particularly intriguing — something I hadn’t yet been able to try, and an absolute hoot. The situations that arise when tossing in another player to the equation always serve to improve the experience. You may have seen all there is to see in Minecraft before, but it’s always new again with friends involved, something this port does quite well.

This enhanced port may be devoid of some of the newer patched-in features (there’s more to come, the hints on the loading screens proclaim) and is intended to satisfy both new and old players, but it’s an excellent and full-featured version of Mojang’s smash hit that deserves all the praise its big brother gets, if not more, for bringing the phenomenon to a wider audience. Hopefully this means bigger and better things for the game in the future — and more for console players as well. Long live Minecraft!