Developed by: Pipeworks Software
Published by: 345 Games
Genre: Fighting
Platform: Xbox 360, PlayStation 3
Play it if: You are interested in a unique fighter.
Skip it if: You enjoy polished video games.
[rating:2/5]

Among Spike TV’s lineup of super-manly shows lies one particular cult classic for the late night crowd. Deadliest Warrior pits some of history’s greatest fighters against each other to see who would win in a “what if?” sort of way. When you strip away the testosterone fueled dialogue and horribly acted “smack talk” it is a really cool premise that is well researched and has some level of historical accuracy. A video game tie in became inevitable as two games were released into the downloadable market. Deadliest Warrior Ancient Combat (AC) brings both of the downloadable titles into one disk, but suffers from the same problems these games had on their own.

When re-releasing a  fighting game, it makes sense to put all the content from both games into one game. After all, seeing how they have different fighters and minor enhancements in between them it should not be that hard to at least allow the player to have Alexander the Great fight a pirate, but unfortunately it was. Alas, we are stuck with a disk that when popped into your console will direct you to your Game Library and act as if you have two separately purchased titles. 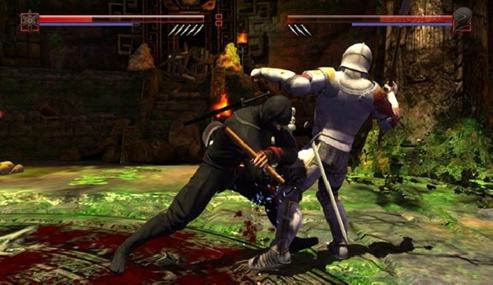 The first game, Deadliest Warrior: The Game, allows the player to control their stereotypical warrior in a battle to the death against another fierce soldier from history. The choice in fighters is broad, throwing in the mandatory Ninja and Spartan along with the unique Apache Indian or Rajput Warrior. What makes Deadliest Warrior stand out is its approach to combat. If you stab someone in the head, they will die and the battle can be over within seconds. Cut their arm off and they will no longer be able to hold a shield or do grapple moves. This allows for a much more defensive style to the fighting, with parrying and counter attacks being key to victory. A fast character like the Ninja may be able to side step a slow Viking, but one blow from his ax and off goes the Ninja’s head. There are unique finishing moves for each fighter and overused taunts, but in the end there are not enough fighters or modes to make the experiences any lengthier. 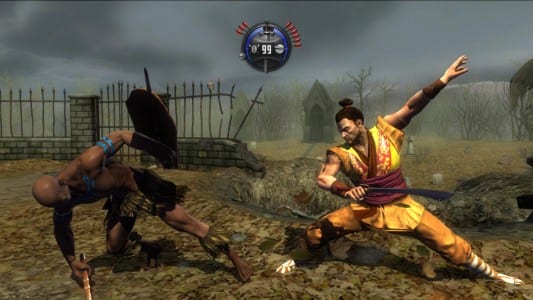 The second game in the package is Deadliest Warrior: Legends, which features real life historical characters, rather than standard issue soldiers. Here you can play as the merciless Attila the Hun and face them against Shaka Zulu. These improbable battles is what makes Deadliest Warrior stand out. The production values were much higher in this game, allowing for a slight face lift and improved menus and fighting. The health bar has been completely removed, making the previously mentioned method of fighting even more crucial. Each face button is matched to a part of the body (head, arms, legs) and instead of a finishing blow, you can choose what part of the body to break when a grapple is started. The other player can try to counter this and if done successfully it can lead to a lethal counter. There is an extra mode in his version where you play a “Risk” type game against the computer, but like everything else it lacks polish and any significant replay value. 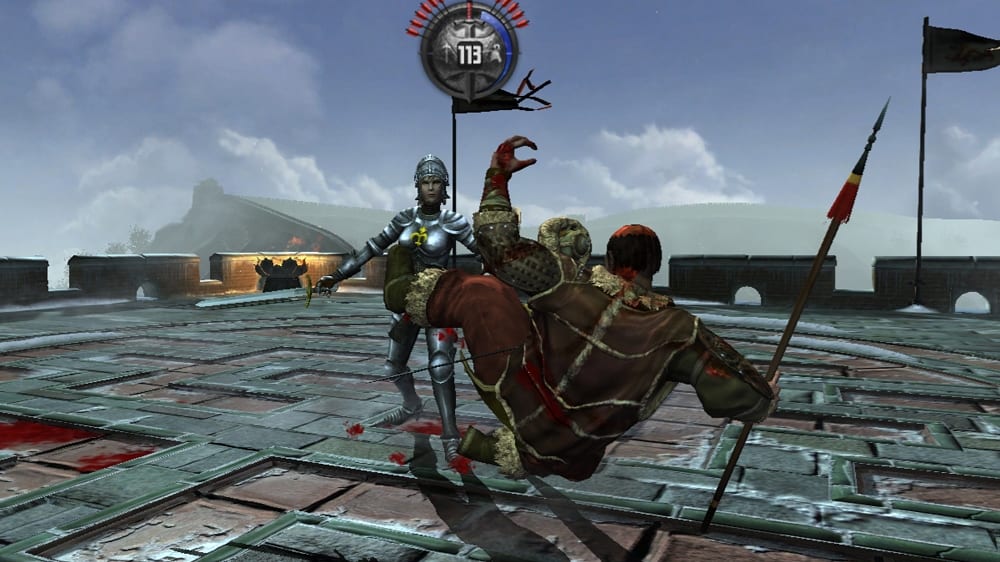 The package also includes six episodes of the  TV show. This is a good thing if you need something to do while you wait for the horrible load times in both of these games. You will have to wait for loading in between fights, to pick your fighter, when you win a fight, when you lose a fight. It is like your cable company putting you on hold when you have a complaint about your bill, they want you to get off the phone. This game wants you to stop playing it.

Conceptually, both games are really interesting. Fighting feels more real, especially when removing the health bar, and getting a perfectly placed head chop is truly gratifying. Unfortunately there are so many bugs that the game becomes unplayable at times. In the second game, there is a glitch that I was not able to get by where you are not able to switch to your secondary weapon. This can lead to some horribly mismatched fights and takes away from the experience as a whole. The game crashed twice on me and visual glitches hamper almost every fight.

When boiling it down. Deadliest Warrior: Ancient Combat is a poorly produced amalgamation of two mediocre games. The fighting is interesting for about an hour until you realize that half the experience is being ruined by major glitches. Even for a budget title, it is hard to recommend.