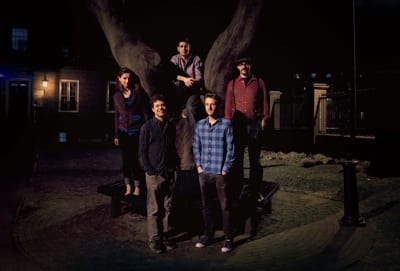 Local band Cowgill has announced plans to release side one of their debut album “Planted” on May 17, holding a “Release Party” performance at the Middle East Upstairs in Cambridge.

Cowgill – vocalist/guitarist Paul Cowgill, Dan Weissman on trumpet and mandolin, keyboardist and trombone player Mike Truskowski, violinist Leeann Hacket, bassist Ryan Rivers, and drummer Joe Pess – combines indie rock, folk rock and a little bit of pop to create a unique sound all their own, described as a mash-up of Fleet Foxes, The Shins, and The Beatles.

The sextet came together in 2011 through a series of events where one member stumbled upon another. “I’ve lived with Mike for three years now and I met Dan through a friend of a friend,” recalls Cowgill. “We found our violinist on Craigslist and she knew the bassist who went to college with our new drummer.” The sextet has been working on material for their new album ever since.

Cowgillw’s members each have a unique background. Hacket, for example, is a Music Therapist for the elderly and blind children, while Rivers and Pess attend Berklee College of Music. Weissman is an architecture and design student who has always been involved in music. Ultimately it is music, and the influence that it has on their lives, that ties them all together.

Earlier this year they released their first single, “Plans”, and are happy with the response from their fan base. “I think it’s been really good; we’re new to this.  It’s just funny and hard because you don’t really have anything to compare it too,” says  We’ll know for sure once the whole [album] comes out,” says Paul. They would follow it with the release of their second single “Extra Gravity” on April 19th.

With the release of the two singles, Cowgill aims to show off their eclectic sound and break the rigid lines of music genres.

“We are trying to straddle the line between indie and folk,” Cowgill explains. “…We’re really focused on cool lyrics and interesting structure like indie rock, but make it less mopey and take you through interesting soundscapes.”

They set themselves apart by incorporating a full drum set and brass section, unusual in the folk rock scene.  Some even consider Cowgill, with their lush sound,  to be more of a baroque pop band.

“When you just say indie and folk it doesn’t cover that we have a pop influence –  but not like a Katy Perry, Top 40 kind of thing,” Cowgill explains.  “The goal of our music is to make people happy, not depressed.”

Before the band considers their sound, they look into lyrics and structure.  “Usually I make up the structure of the chord changes and spend a few days thinking about mood, etc.,” explains Cowgill. “Then I bring it to the band and we think about arrangement together.”

Like the lyrics and composition of their songs, the title of their debut album also has a lot of meaning. “We spent a while thinking about that.  ‘Planted’ is one of the lyrics from the fourth song of the album called ‘Red Carpet’,” says Cowgill. “It had a lot of word play, which fits with the album. I think it’s a cool title for a debut album because the goal here is to break free of the rooted life style that we’re in.”

With their album production in full swing, the band plans to finish recording by September or October of this year.  In the meantime, the band is doing all they can to get their name out there. “We are trying to build up a name for ourselves in the local market but our goals are national and international even though it’s pretty early on,” says Cowgill.

Of their live show, Cowgill says “It’s kind of all over the place. Some things that will come through in our live shows are our crazy use of horns, and covering songs like Paranoid Android from Radiohead.”

Cowgill is trying to plan a three-week tour in August and will be looking to their growing fan base for support. Starting on May 8, fans can create and promote a campaign on www.gigfunder.com for Cowgill to earn monetary support for a tour.