Bird Mania 3D is about a little blue bird named Mojo whose friends left him behind after they decided to migrate to Africa. He’s now on a mission to catch up to them and enjoy the warm weather. That’s about all you’re going to get when it comes to a story, and the game itself repeats itself each time you die. But before your dismiss this eShop title, look at its price tag and read on. 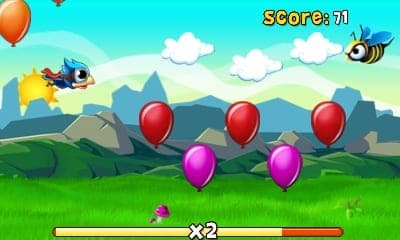 The game is all about scoring high and quick reflexes. Using the 3DS’s Circle Pad and face buttons, you need to move Mojo up and down as he flies (scrolls) continuously on the top screen and steer him clear of obstacles like treetops, bees, and evil birds. One hit from anything will cause your little bird to fall to his doom. You can further increase your score by collecting stars in his path or by ramming into enemies with the shoulder button. Each baddie you take down increases your multiplier and the points you get. I told you scores were a big deal in this game!

That being said, I do wish the game offered online leaderboards. You are basically competing against yourself each time you get a new high-score, and while that’s okay, it would have made a lot more sense if you could see how others fared or how long they lasted. I mean, isn’t scoring what this game is all about? To remedy the lack of any online implementation, the game does offer 20 difficult achievements that will test your skills dodging trees. 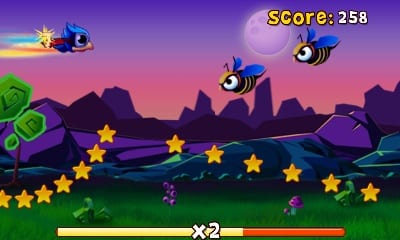 Don’t take me wrong, Bird Mania 3D is a joy to play. The colorful graphics and the catchy music really let you concentrate on your session, which could end in just a few seconds if you’re too distracted. While the 3D effect is good, it hurt my eyes a little the farther into the game I got and the faster the screen started scrolling. I also found the touchscreen controls to be so much better than using the D-pad or Circle Pad, which felt a bit stiff. Sliding my stylus up and down and seeing how fluidly Mojo reacted really made guiding him a lot easier this way.

The Blast Factor: Just $1.99, Bird Mania 3D is one of the cheapest games on the eShop right now – but don’t confuse cheap for bad here. While it lacks depth (and online leaderboards,) Bird Mania 3D’s simple and addicting gameplay will inform you that some migrating birds do get left behind and that some games still care about how high you score.