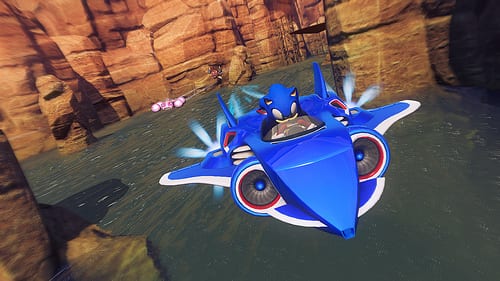 Perhaps drawing inspiration from Mario Kart 7, the game will feature karts that will adapt to quick changes in the terrain as well as also offering dynamic changing tracks inspired by different Sega titles. The game will feature notable names like Sonic the Hedgehog and Dr. Eggman as well as new characters like Gilius Thunderhead of Golden Axe and Vyse of Skies of Arcadia.

Like in the previous Sega All-Stars Racing title, players can use a character’s All-Star Move and pick up offensive and defensive items as they race. The game will offer an “all new fair weapon system” that affects how your characters defend against an item depending on the skills at their disposal.

Offering a Grand Prix mode, online multiplayer, and competitive Battle Arenas, Sega hopes to change the rules of the race when its title hits consoles, handhelds, and PC late this year.