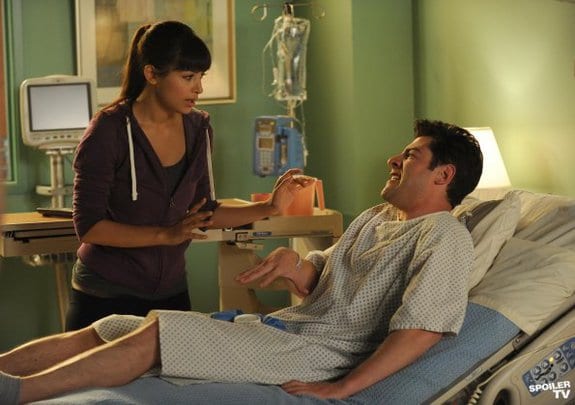 Cece (Hannah Simone) rushes to the hospital where Schmidt (Max Greenfield) is recuperating from a penis-related injury.

Comedy is an art, not a science. Because of that, there is no formula that can produce the maximum amount of laughter. Mistakes can often be as fruitful for comedy writers as when they stick to the agreed-upon conventions of their craft. “Tomatoes” (wait for the pun) is that unexpected fruit.

It shouldn’t work for many reasons. You could cite the stereotypical Russian/foreigner jokes that Nadia was the vessel for, you could point to the inherent laziness of penis jokes. You might even scrutinize the way Dermot Mulroney’s arc was dispatched so coldly, causing Jess to come off fickle or at least shallow. And while all these glaring flaws on are flamboyant display, there’s a lot to love about this episode. Maybe I’m infatuated with these characters to the degree that they can do no wrong. Perhaps I should not giggle at genitalia as I did, but even if “Tomatoes” doesn’t have the slam dunk effect of “Normal” where its indisputable how inventive and rewarding it is, underneath some of the distracting and even jarring aspects of the episode, there’s a vibrant heart. Some scenes are daring in their leap from the ridiculous to the raw.

That may sound like digging for substance when there’s just airy, wispy fun, but when Nick and Jess started shaking their butts at one another in frustration—after she sees his ex, Caroline, leave his room wearing his shirt—there was the overwhelming feeling that they are the fire under those asses they desperately need. Jess realizes that Russell is in a phase of his life where tranquility and contentment is preferable to wanting to rip someone’s clothes and face off at the same time. Jess is young enough, however, where she wants to share that thermometer-busting heat with someone, even if “it’s harder and it hurts more.” And Nick, has chosen not to feel anything regarding women because of the pain they’ve continued to cause him, but Jess drives him up a wall and he isn’t running away. He keeps going back to her.

So while out of context, one would undoubtedly view their ass shake-off as an immature and even lazy attempt at laughter, to me it has a layer of sophistication and meaning for these people that is imperceptible to an untrained eye. But if you have, willing or otherwise, become invested in the loft mates, you know this is not just a senseless spat. It’s set up to show how compatible Nick and Jess as a couple. They fill the holes their previous romantic relationships have failed to. If nothing else, this week’s episode warmed me up to the idea of a Nick and Jess hook-up when before it felt gimmicky and forced.

These awakenings of sorts begin on the rooftop where Nick has taken up the hobby of planting tomatoes. Somehow he feels this will begin a healing process. He’ll channel his heartbreak and despair into bringing new life into the world. Yeah, it’s freaking sad. Jess can’t help herself from using plant metaphors (he’s turning over a new leaf!), and Winston feels he’s just devolving. It’s easy for him to say though, since he appears blissfully in love with Shelby who only appears in this scene to shove her tongue down Winston’s throat. Otherwise, he spends most of the time without her, bragging about how happy he is. This underscores how much of a rouse his relationship might be. While he mentions their lovemaking and giddily shares pictures of her cat with Nick, it’s feels like he’s over-compensating. I’m not convinced these feelings reflect real sparks between him and Shelby. Since it started as the rekindling of a flame, I wouldn’t be shocked if on both sides there’s a fixation on how wonderful it feels to be in love, when in reality they’re nowhere near that level yet.

Jess runs into Russell’s ex-wife, Ouli (let’s pretend that’s the correct spelling) at the gym and accidentally invites her to dinner with her and Russell to break up their awkward naked hugging in the sauna. Dinner goes horribly as expected, but the added wrinkle is that Jess detects a sexual tension between them when their fighting begins to escalate. Whether she’s jealous or this just tips her off to the lack of passion in her relationship with Russell is unclear, but either way she seems determined to throw some wood on their fire.

When Schmidt comes over Cece’s to “make sex” as her Russian model roommate Nadia says, Cece puts up a barrier and recommends they cool off since the pregnancy scare made things a little too intense. She even hastens the moving-on by setting up Schmidt for a date with Nadia. Now Nadia is bound to be a point of contention for some. Most of her jokes surround her heavy accent, her distorted concept of American culture and the brutish, sexually aggressive behavior we associate with Russian women. And while this is stereotypical, and therefore not commendable in terms of characterization it produces some incredible lines. I also got the feel that because she embodied such a surreal and frankly insulting view of immigrants that the writers were aware that she was basically a parody of a person with the function of serving as a vehicle for chaos that would eventually bring Schmece (Schmidt and Cece) back together. As long as you go for broke with that satirical aim, I’m okay with it.

Nick continues to throw himself into this tomato thing, even buying a scarecrow to keep away the “sky rats.” He also develops a bitter attitude toward Winston who is kind of a dick and throws his happiness in his face. It was worth it though to see Nick scowl at Winston, pitchfork in hand and yell “Git!” There’s also one of the few tender moments I pointed out where Nick breaks his gardener facade and yells back, “Sandwiches and sex? I want that.” It’s funny, but from an emotional standpoint it’s the first time Nick acknowledges what he’s suppressing.

Yeah, he’s called himself pathetic before and had public outbursts related to his breakups, but these have all been exaggerations and hyperbole for our benefit. He just seemed like a schlub who felt sorry for himself because of his numerous failures. But it not the lack of success, it’s what he’s lost. Nick wants a companion, someone who gets him, someone he can share mundane things with, like sandwiches. In a way, it gives more weight to the later shouting match with Jess since he could have that if he’s willing to take a huge risk. And because of that simple, silly line we know what is on the line.

While that’s happening, Jess tries to manufacture a fight by asking what drives him crazy about her and proceeding to do all those things. This was another instance where Zooey Deschanel’s surprising slapstick skills is showcased. I’m glad they’re tapping into that since she isn’t as gifted a line reader as the Jake Johnsons and Max Greenfields of the world. When Russell stops her angry advances he says that passion is overrated and its clear this is the beginning of the end. While I think it falls in line with his backstory to say that he doesn’t want that kind of roller coaster relationship he went through with his ex, I didn’t feel it was the proper sendoff. His line about him and Ouli being like inching closer to a woodchopper was a nice sentiment, but he didn’t protest much at all, and Jess just got out the car like it was a bad first date. I suppose there’s no easy way to release a guest star back into the wild, and it’s not that I don’t buy Jess’ or Russell’s motivations, I just felt like the guy deserved to go down guns blazing. He did so much for Nick’s character by adding to his comedic arsenal with the man-crush angle, but c’est la vie.

When Cece asks Nadia about her date she says it was brief because “small man went to hospital.” The concern on Cece’s face was sweet as she rushed over, Nadia laughing about how much Schmidt cried (I’ll admit I would have liked to see that). She arrives and sees Schmidt with an ice pack in his crotch. Again, penis jokes are certainly juvenile, BUT when Schmidt delivers his line, “I broke my penis,” like he accidentally dropped something fragile of mommy’s, I died. His recounting of how it happened is L.O.L.L worthy to be sure, but the penis jokes even had significance. Afterward, Cece spits it out, incensed that another woman had him, and tells Schmidt she likes him—”For my personality?” “Yeah I was surprised too.” This moment felt awfully cathartic and well earned, and was masterfully undercut (that’s how Schmidt rolls) when his arousal during their emphatic kiss gives him excruciating pain. This motif is extended into the credits where Winston lists a bunch of things he knows get Schmidt’s juices flowing (models eating sliders, Bernadette Peters on a high beam). Sick bastard. And it’s yet another reminder of why we like to hangout with them every week. We love being privy to their inside jokes, and not having to suffer the consequences. Like say, a broken penis. *Shudder*

Overall, “Tomatoes” struck me as a mask, a veil over the eyes that would quickly become lifted, but in a blink would be covered up by more raunchy jokes and hip references. I’d agree if “Tomatoes” was simply an assemblage of punchlines about dinged-up dongs, ruthless Russians and savvy nods to pop-culture this would be among the show’s weakest, but because it’s a see-saw between its identities—a romp with some outlandish roommates and an insightful, comedic lens on a group of twentysomethings helping each other figure out who they are —it maintains its heightened sense of self. Still, it does slip into sporadic plotting that would strike some as veering off onto a detour before we hit the main stretch of road, the final two episodes of the first season. Like the tomatoes were for Nick, “Tomatoes” was a distraction, sure, but when you lose something it usually turns up when you stop looking for it. And what turned up for me was another worthwhile week of experiment that yielded hysterics and feeling. “New Girl” recognized that the best way to explore deep insecurities is with some distance, a fresh outlook, and a sense of humor.

– Nick: “Jess, you’re dating a man I could see myself growing old with.”

– Nadia comparing Schmidt to who he later deduces is Mickey Mouse, “Why don’t you get in your spaceship like McMouse!”

– Ouli: “You know what it’s like with Russell. It’s like you’re on the bow of a catamaran being blasted with spray except you’re naked, and on fire.”  Jess” “Yeah, I mean I’m like, Russell, put away the passion and show me a moderately good time.”

– “My penis is having a heart attack. You gotta get outta here. Don’t bend over!”

– “Describe it to them as like, a battered highway cone.”