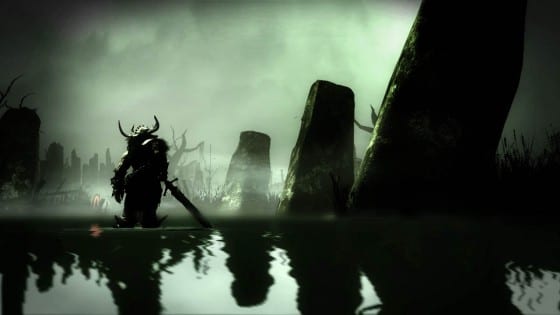 Developed by: Climax Group
Published by: Microsoft Studios
Genre: Action
Platform: Xbox Live Arcade
Play it if: You really like blood
Skip it if: You like games that feel finished
[rating:1.5/5]

There’s a common misconception that game reviewers love to write about terrible games, that we secretly hope for the games that you’ve put your hard earned money down on will suck so bad that we’d get to mock it viciously. To that effect, I really wanted Bloodforge, the ambitious, gory and stylish new action game for Xbox Live to be great, to set a new standard for what a downloadable title could be, but when I finally got my hands on it — it was anything but.

Bloodforge feels an awful lot like the Kim Kardashian of video games. Sure, it looks great, but once you ask it to do anything worthwhile, you realize just how disappointing it is. The camera? Terrible. The combat? Slow and clunky.  Even those visuals that should sell the game are filled with an unforgivable amount of bugs that make it Bloodforge seem like a shoddy, unfinished version of all the great third-person action games you’ve played in year’s past.

BloodForge tells the story of Crom, a once great warrior that has since thrown down his weapons in favor of a family life. When those pesky gods drag him back in, they trick him into killing his family and Crom gets all pissed off and starts cutting dudes for revenge. Your goal is to slash your way through maniacs, executioners and even the gods themselves to get your vengeance.  It’s a tale seemingly ripped directly from Sony’s God of War series; an obvious inspiration for Bloodforge, but they key difference here is that you’ll find yourself not caring about the story nearly as much as you did in the tale of Kratos. The entire time I was playing Bloodforge, I kept waiting for something to happen — anything, but it never did. The game just seems like a constant stream of enemies that spawn out of nowhere.

It’s very clear early in the game that Bloodforge takes a lot of its cues from the God of War series. Even the controls feel like they were taken from the PS3 exclusive franchise and ported over to the Xbox 360; you’ve got your strong attacks and your weak attacks, and the game even keeps track of your combos in the same manner as the game. What didn’t Climax Group and Microsoft take from Sony Santa Monica? That’s easy, the quality of the combat. I consider God of War III to be one of the most satisfying games combat wise that I’ve ever played — and Bloodforge is the exact opposite. Crom moves slow and clunky, and often gets caught in cumbersome animations that result in taking an excess amount of damage from nearby enemies. Climax Group was even bold enough to take God of War III’s Rage mode and call it Berserker mode, except here it’s just a slightly slowed down version of the game, like bullet time light.

Bloodforge’s camera system doesn’t help the game’s problems at all, as it makes the combat seem even more ineffective. Most comparable to that of Ninja Gaiden III (read the review here), the camera is set too close, so you can never get a good view of the entire battlefield. Even worse, the camera tends to swing around dramatically, and always tends to place itself in a position where you can’t even see the enemies close to you. It’s most frustrating when you’re faced with bosses that charge at your from off camera, before you can fix it, draining the majority of your life meter.

So just what does Bloodforge do right? Visually, it’s an interesting game.  The use of shadows and the inclusion of only a few colors (admittedly, there’s a lot of red for blood in the game) is reminiscent of Sin City, and adds a cool touch to the game. Even the cool visuals though are flawed, as the game is filled with bugs, like the time I was in the middle of a group of enemies and started floating to the top of the screen. I would move the stick to come down, and then I would go back up.  There’s a fair amount of screen tearing throughout the game as well.

The Blast Factor:  Bloodforge had the makings of a great Xbox Live Arcade title, but sadly it’s nothing but an unfinished mess of a game that clearly needed some more time in development. While it’s easy to compare it to games like God of War, the quality in the source material is miles ahead of what Climax Group has done here. Plain and simple — don’t play Bloodforge.