Search
Home
Video GamesReviewsXbox 360
Developed by: Spiky Snail Studios
Published by: Microsoft Game Studios
Genre: Physics based Puzzle
Platform: Xbox Live Arcade
Play it if: You love a good liquid based puzzler.
Skip it if: You expect more out of your ten dollars.
[rating:3.5/5]

Xbox Live Arcade is filled with ridiculous puzzle games trying to garner your hard earned dollars. It can be difficult to sift through the hundreds of games available to try and find one that will suit you. Luckily, The Splatters is quirky and imaginative enough that anyone who picks it up is likely to enjoy their time with it.

The premise is simple. You control these little blobs of jelly that are used to explode bombs placed across a single screen level. The challenge comes from the fact that you can only launch the blobs once (almost like Angry Birds) and they will not destroy the bombs unless they are “popped” by running into something sharp or hitting a surface with enough force that they explode. Once popped they turn into uncontrollable liquid, so you need to be careful where you are aiming. The liquid physics are really impressive and the game has a quirky art style that gives every aspect of it an undeniable character. 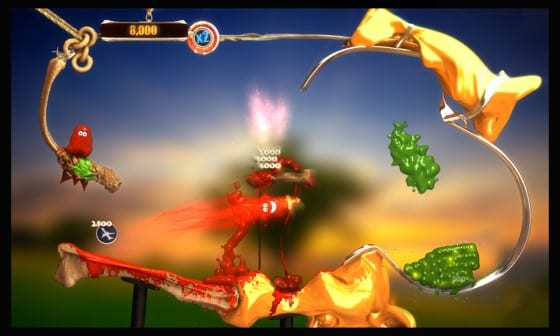 The real fun comes from trying to link together combos by breaking the different bombs in style. Dozens of combos are at your disposal, anything from a slide to make your goo travel faster and further to a special move called the flip that changes the direction of every object in the world. As you progress through the game, you unlock more moves such as the air bomb that allows you to change the direction of the blob in mid-air. Mastering all of the different combinations and trying to link them together can be addicting, and the online leaderboards do not help with trying to put this game down.

Unfortunately there are only about 30 levels in the game, each taking less than 5 minutes to finish, so if you pick up on the controls and ability to link combos together quickly, you can earn every star in a couple of hours. Separate scoring modes such as combo multipliers and a unique one where you have to use specified combos to beat the level are available, but it does not make the game too much longer.

Nonetheless, for only ten dollars this is a really fun downloadable title that is sure to impress anyone with a penchant for stylish physics based puzzle games.