This movie is barely 90 minutes long. And “Lockout” was the longest movie I’ve seen in the past year. At least.

It’s still a little unclear how this is possible. Was it the fact that in 2032 or whenever this movie is supposed to be set, it seems that anyone can be an astronaut? Was it the entire scenes and plot points that were so poorly cribbed from better movies such as “Blade Runner”, “Die Hard” and “Con Air”? Was it Guy Pearce’s inept Harrison Ford impression? Was it the near constant threats of rape against the President’s daughter who’s on the space prison where there’s a mass breakout?

Was it because the movie takes place in a space prison?

Let’s just call it all of the above.

Here’s what I think happened. Celebrated action director Luc Besson (“The Fifth Element,” “The Professional”) had a super-cool idea about a world where people keep their most hardened criminals in stasis in an orbiting space prison. There’s a breakout, and the government turns to one man to go in (Pearce), save the President’s daughter (Maggie Grace) who’s there on a humanitarian mission, and quell the riot. As movie ideas go, it is indeed pretty super-cool.

Then poor Luc hired a couple of rooky screenplay writers with only a vague idea of how to edit and produce a finished work, and just for good measure got a bunch of jagweed producers involved in the re-writes. Everyone was feeling lazy that day, so they just stole a bunch of crap from “Blade Runner” (a whole chase scene in a rainy, depressing futuristic Chinatown), and “Con Air” (the prisoners escape partly because the idiot secret service agent wouldn’t relinquish his gun). 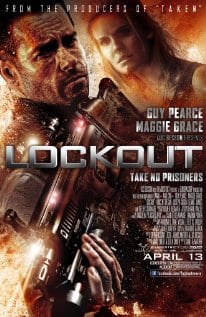 Pearce deserves a lot of blame too. His version of Harrison Ford’s trademark sexy dickishness was half-assed and ridiculous- I’m fairly certain he actually called the President’s daughter “Princess,” though that may have been a hallucination. There might have been more for him to do, but the movie is so badly cut together, you never have a chance to get a handle on anyone, even the main character.

Grace is a little bright spot, imbuing her character with more dignity than this movie deserves. And British character actor Joseph Gilgun is mesmerizing as a mentally unhinged prisoner who keeps being pesky and shooting people for the funsies. Gilgun acts circles around Pearce and everyone else in this time-suck, providing comic relief while being simultaneously really, really terrifying.

What would have happened if Besson had the time or the energy to complete this project on his own? Probably it still would have been silly and fleeting. But maybe it would have been a self-contained little work of pop art, the way “The Fifth Element” was, or “La Femme Nikita”. It may not have had the staying power of those movies. But at least I wouldn’t have left the theater, turned on my phone and been shocked it was only 8:30 p.m.