I’m not sure how to approach this review. I don’t want to be needlessly harsh, but I’m not sure the producers of this film approached it the right way.

At the end credits of “Goon,” we learn that the movie is based on the exploits of a real life hockey goon and are treated to some clips of his actual fights, as well as an interview with the original goon. A documentary would have been far more interesting than the mess that was this fictional narrative.

Instead of a doc, we get the story of Doug Glatt (who is apparently Jewish, though we never learn why we should need to know this), a guy who can take a punch. He can’t play hockey, but someone gets the bright idea to put a uniform and skates on him and get him on the ice as a ‘goon.’ For the uninitiated, a hockey goon is someone who lacks great skill with the puck but is an enforcer on the ice, ready to throw down the gloves and duke it out with anyone trying to intimidate his teammates. Doug is shipped to a team to help a once-budding star gain back his confidence, which he lost after a vicious hit from another goon. Doug, played by Seann William Scott, is set on a collision course with the other goon, Liev Schreiber of all people, who is a tough guy at the end of his career.

I had to ask a random moviegoer at the end of this film if I had missed something. This movie has more personalities than Sybill. I almost think the production ran out of money or started with one production team and then found another halfway into shooting. It’s part “Slapshot,” “Bad News Bears,” “American Pie,” and even “Full Metal Jacket” (the team’s hockey coach spews more expletives than Sgt. Hartman). 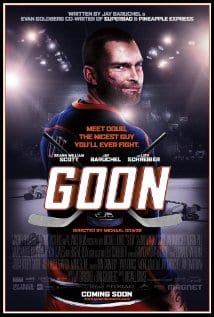 The character of Doug Glatt is portrayed as a simpleton and borderline moron (in the strictest IQ sense), and I think one reason Seann William Scott may have taken this role is because he’s sick of being known as Stifler and the guy from “Dude Where’s My Car?” But there’s playing against type and running so far from type as to make you look ridiculous. Unfortunately, it’s the latter that occurs in “Goon.” And to make things worse, someone decided to cast Eugene Levy as Doug Glatt’s father, who is disappointed with his son’s life choices. Levy plays the role straight up, but the implication of putting him in this movie is clear: it’s an American Pie cast reunion, in case you just couldn’t wait for the actual reunion in, wait for it, American Reunion. I half expected to see Jason Biggs show up or the hockey team hooking up with girls from band camp.

There are a few laughs in Goon, but every time it presents itself as comedic it then swerves into the dramatic or the romantically comic or styles itself as a typical zeroes to heroes sports film. And then there’s the violence. All the beat downs in Happy Gilmore were funny (marginally funny) because it was not to be taken too seriously, but in “Goon” the right hooks are at once non-believable and over the top ugly. I’m surprised they even made this film, considering the fact that the NHL has gone to great lengths to take fighting out of the game. But when the gloves do come off the fights are so unreal as to be laughable. Except at some point, the fights go from being Happy Gilmore-style to more severe and graphic than any the Rocky films could conjure.

There may have been a kernel of a good idea for this film once, but it ends up in such bad and bloody shape that no good cast can rescue it. A documentary would have been so much more interesting. In the modern game of hockey, where there are no goons anymore, it would have been compelling to get a look back at how the game used to be and what the function of a “goon” truly was—how they were used, gladiator-style, to thrill fans who went to a boxing match only to find a hockey game break out. As is, however, “Goon” really deserves to be placed in the penalty box.