Here’s a spoiler-free synopsis of this movie:

That’s it. That’s all I can give you. And if that seems like every other horror movie you’ve seen since “Friday the 13th”…well, it is.

And yet it’s not. But you already know that, because Joss Whedon wrote this movie, and Drew Goddard directed it (a frequent collaborator with Whedon and J.J. Abrams, among others). Suffice it to say, there is more to this cabin, and this movie, that meets the eye. And it ain’t no “Blair Witch Project.”

But any other descriptions must wait until you go to see this surprising, slightly half-baked, and significantly self-important little comedy-horror show.

The young people are headed by Kristen Connolly and Chris Hemsworth, looking very much the pinnacle of horror movie archetypes they are. The people who have…set upon them are led by “The West Wing’s” Bradley Whitford and Richard Jenkins. There is slaughter, well-timed gore, a hilarious bit involving an invisible barrier and a motorcycle.

God, my hands are really tied in terms of plot here. 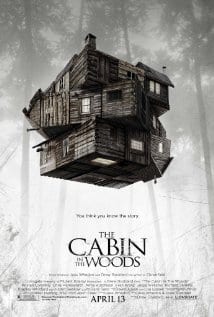 Now, I can talk about Jenkins (marvelous as a project manager and bureaucrat, but I won’t say more), and Hemsworth (surprisingly not terrible when he’s not wearing a Thor costume) but everybody knows that the real star of this show is Whedon. The sci-fi master’s gift to the world is that he can take a completely insane concept (A cheerleading vampire slayer! A crime-fighting demon with a soul! Cowboys in space! A super villain who runs a blog!) and shape it with plausibility, humor, style, and, much more importantly, soul. Whedon makes serious stories, beautifully grounded stories, tales that make you forget how ridiculous their precepts are.

This is hardly the strongest of Whedon’s work. In the end it’s just far too meta and too much of an inside joke to truly be taken seriously. It’s a horror movie that is about the audience relationship with horror movies- that’s the kind of navel gazing that only happens in graduate film courses and episodes of “Community”. But among the self-satisfied reflections of our participation in the ritual of watching topless young women get slashed on screen is still that Whedon flame of humanity. It exists in the soulfulness of Connolly’s performance as the gentle but steely Final Woman, in the details of the nightmares and ancient fears made physical by the Powers That Be within the film.

It’s generally understood that we as a culture fixate and revel in violence in art to work out our own anxieties and fears- we sacrifice imaginary people in order to ensure that we ourselves are not consumed. Whedon’s the first guy who actually made me realize how bizarrely cruel and selfish that is. “The Cabin in the Woods” is an odd little movie with a plot I cannot explain. It is very scary and very funny. And like all of Whedon’s work, its unexpected truth is painful.