If you want to see a “film” –as opposed to a “movie” —make sure you check out A Separation, winner of the 2011 Academy Award for Best Foreign Film. 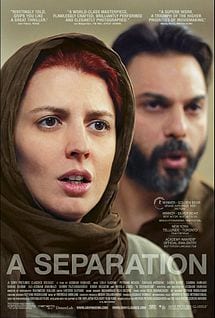 The Iranian work depicts a husband, Nader (Peyman Moadi) and wife, Simin (Leila Hatami), who struggle with a seemingly irresolvable conflict. Nader’s father suffers from Alzheimer’s disease and needs constant care, but Simin wants to move abroad, leaving her father-in-law behind. The couple’s daughter, too, is torn by these competing desires. A separation is the only thing that can reduce the tension.

Without his wife, Nader, a well-to-do banker, must find help to take care of his father while he is at work. He hires Razieh (Sareh Bayat) to assist his father during the days. Pregnant, simple, and pious, she is ill-equipped to handle the senile father; she ties him to the bed one day when she has to leave the apartment. Nader returns home to discover this and summarily fires her, sparking an argument. As Nader escorts Razieh from the apartment, she slips on the stairs, causing her to miscarry. Razieh’s husband, an out of work laborer with credit problems, blames Nader. Both families suffer as court proceedings unfold and the truth comes to light.

A Separation works on many levels: thematically, stylistically, and intellectually. It’s hard to compare the narrative to anything we might experience in America because the position of women in Iran is so inferior to that of men, but there are many more separations in this film than just that of husband and wife.

Class, gender, age, religion—it seems that no one in this society can see eye to eye. Indeed, the mise en scene of A Separation is brilliantly crafted. People are always separated by doorways, windows, rooms, plexi-glass. No one can make a connection without some divide being in the way. Art film junkies might be reminded of Robert Bresson’s L’Argent (“Money”) in which the subtext is emotional and social currency, or lack thereof.

The artful use of subtext is what makes A Separation a true “film” as opposed to a “movie” – the latter of which only seeks to entertain, not to challenge. Don’t get me wrong: there’s nothing like a little movie fun. But the direction of motion pictures today –at least in the Hollywood sense – seems to be driven toward concept, with flashy visuals and punchy dialogue. All too often there is little beneath the surface.

Compelling characters that manifest an internal struggle and change, as well as an overall dramatic argument, seem to be afterthoughts in many American movies.  A Separation, in contrast, is proof that “cinema” remains alive and well.

“A Separation” is now playing locally at the Kendall Square Cinema in Cambridge and the Coolidge Corner Theater in Brookline. Other locations and showing times are available here.