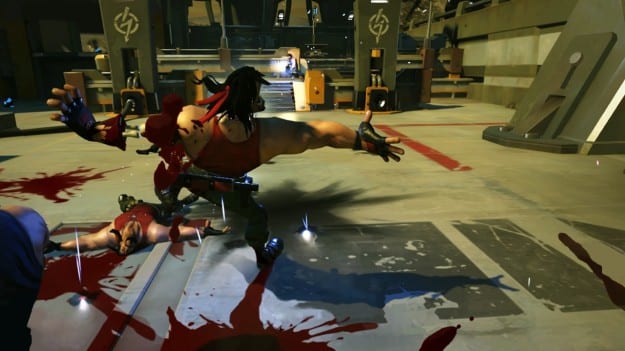 True to its name, Edge of Reality’s upcoming free-to-play PC title not only focuses on weapon customization, but it takes it to the extreme. Loadout will give players countless weapon parts that can be mixed and combined before a match begins. Not only do these parts affect a weapon’s reload speed or ammo, they also change the way it behaves entirely.

Loadout’s creative director Mark Nau walked me through the game during a gameplay session at PAX East this weekend. Players were divided into two teams of four, and before a match started everyone had the chance to customize his weapon, swapping out fireballs for electric bolts, changing its ammo’s physics, or simply replacing bullets for rockets. I had a long list of parts to choose from, but I decided to play it safe and created a quick-fire weapon that shot fireballs in a straight line. While both teams are choosing their weapons, you can enter a practice room to test out your new gun too.

After Nau suggested at least one person on each team be the designated healer (yes, you can even replace damage-dealing ammunition with healing effects,) the match was on. Our task was to capture certain points around the map before the other team did. These bases kept moving to different areas after they were captured, so I needed to look at my map often to know where to go. The game doesn’t have a cover system, so my options were to always keep moving, either by jumping or rolling, to stay alive.

The weapon I chose was super helpful and it lit enemies on fire when my shots didn’t kill them. The game’s cel-shaded graphics and bloody, yet comedic humor, reminded me a lot of Team Fortress, a game that Nau confirmed to be one of the game’s inspirations. His goal was to make Loadout even more over-the-top, a goal that was evident when someone burned to a crisp, had his arm blown off, or simply exploded from a rocket blast.

After a few minutes of figuring out what I was doing, I got the hang of things and enjoyed setting enemies on fire. Our team ended up winning the match too! After each game, you get experience points and a new weapon part to add to your collection. These parts are random, so even lower level players can get rare, more powerful ones. Nau also said that his team will be adding access to weapon lockers that will let you change your loadouts during a match.

I really enjoyed my time with Loadout, not just because my team won, but because it was great to see a shooting game that focuses on something I enjoy – customization. I was also really impressed by how great it looked even in its pre-beta stage. Nau also mentioned he is working on increasing the number of players per match.

The game will begin its open beta this summer. Stay tuned for more news about Loadout in the months to come.