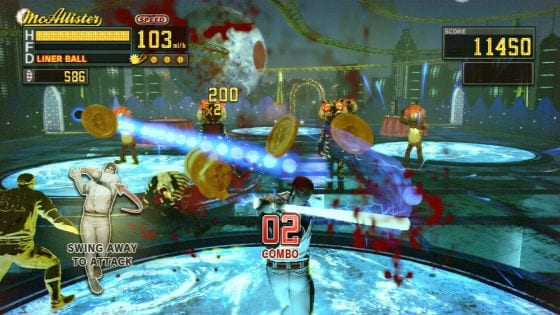 Diabolical Pitch first made an appearance back in 2010 with only a vague trailer and project name: Codename D. Despite the lack of information, one concrete fact was obvious: it was Grasshopper Manufacture’s brainchild. This was more than enough of a reason for potential players to get excited, as the developer has a particularly impressive track record when it comes to combining style, innovative concepts, and the ever-fleeting concept of “cool.” Now that the latest and zaniest release has finally been unleashed, does it hit a home run or swing and miss?

Step up to the plate as McAllister, a former championship baseball player who finds himself stranded in an abandoned amusement park. Having suggered a debilitating injury to his arm that keeps him away from the sport he loves, this freakish amusement park is just one more stop on the road trip to hell his life seems to have started on. However, a bizarre new acquaintance was offered him the deal of a lifetime: a special cybernetic arm that could very well give him back his career. The catch? McAllister must escape the amusement park with his life intact.

Easier said than done, of course. The eerie park is crawling with demented dolls and disturbing enemies that would like nothing more than to have your head. That’s where McAllister’s former glory as a pitcher comes in. His brand new pitching arm doesn’t so much send balls whooshing past enemies’ heads, it fires them like rockets. The typical laws of gravity and physics need not apply here — and that’s the beauty of it all. Grasshopper Manufacture sprints right past the limitations of reality and adds a delectable layer of polish and style that makes Diabolical Pitch a visual and aural treat. Only when you get to the specifics of playing the game do things falter.

McAllister can fire off fastballs to the left, straight, and to the right of the screen as you mimic a real windup and pitch via Kinect. Locking onto enemies is done with your free hand, in addition to a truly malicious headshot that’s quite destructive but damagingly time-consuming. All your bases are covered, so to speak, except for accuracy. No matter the amount of space in your open area or optimal lighting conditions, the Kinect fails to detect so many proper pitches and movements that defending yourself becomes a colossal disaster.

When you’ve missed an entire swarm of enemies (though a life-saving kick to clear your area is available to you as well) failure is practically guaranteed. Timing is everything, especially when faced with completely intimidating boss encounters and the occasional quicktime event that requires swift movements and impeccable precision. The Kinect fails to deliver this, and thus transforms what is otherwise a wholly entertaining premise into a frustrating slog.

When your pitches are on point, though, it’s easy to feel as though you’re on top of the world. After dispatching a bevy of baddies, McAllister is often afforded one of the game’s titular Diabolical Pitches as a special attack. It’s prudent to use these attacks when you’re being assaulted on all sides, though the moves’ prompting do tend to impair your vision as to the enemies approaching and what’s going on in your surroundings. They are, undoubtedly, one of the most entertaining portions of the game, especially the Dragon Ball Z fusion dance-esque poses that are required to unleash them.

You’ll look and feel ridiculous, but in a great way — little else beats some of the hilariously awkward poses (especially when playing with friends) and it quickly became a personal draw to continue playing. Unlocking Pitches is as simple as earning coins and subsequently purchasing baseball cards — you can also increase your stats and toss multipliers into the mix.

Multiplayer makes the game feel like much less of a struggle against the peripheral, and it’s great fun to double up on poses for special attacks and revives, but when the game itself lasts only a couple of hours, playing with a friend only makes the time go by quicker — assuming you aren’t fighting against the motion control the entire time.

Top-notch presentation, signature Suda51 craziness, and that over-the-top style you’re likely used to if you’re at all a fan of Grasshopper Manufacture’s catalogue of releases are fantastic selling points, but the spotty motion control mars the experience entirely.

The Blast Factor: While this arcade-styled shooter doesn’t necessarily knock one out of the park, it plays a fantastic ballgame, especially on the Kinect front as a frantic, over-the-top alternative to classics such as House of the Dead. A fresh, modern spin and a rather psychotic coat of paint makes a world of difference when applied to old-school mechanics, and it really shows. It’s unfortunate, then, that the very peripheral meant to give it life is also the same reason the game misfires. The exact science and precision of a real pitch is something the Kinect simply cannot, at this point, afford, despite the fantastic foundation provided to work with.