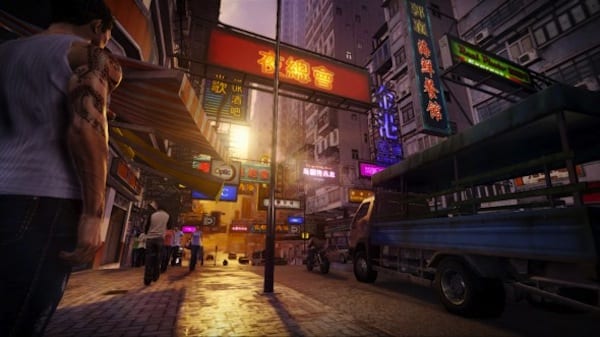 This weekend at PAX East I had the opportunity to sit down with Sleeping Dogs and United Front Games producer Dan Sochan and play a demo of the open-world game that takes players on a trip to Hong Kong. You play as Detective Wei Shen, an undercover officer sent back to his homeland to infiltrate the Triad organization. If all this sounds a tad familiar, that’s because it is.

Much of the story’s plot was influenced by the Hong Kong crime-thriller Infernal Affairs. Much of the game’s mechanics are based on those previously seen in other games. But, you see, all these influences aren’t necessarily a bad thing. Sleeping Dogs brings everything other games have done right in an attempt to do it better.

One of the first things I noticed about the game was its open-world environment. Sochan told me he and his team visited Hong Kong to really capture the realism of the city. Streets are lined with storefronts that glimmer at night and tight alleyways are situated right beside high-rise towers. His team’s goal wasn’t to recreate a geographically correct city, but instead incorporate its essence into what works for the game and its various missions.

As I made my way through the streets and had to chase after one of Wei’s targets, I noticed the controls were very contact-sensitive and allowed me to dodge people I was running into simply by tilting the analog stick. Jumping on ledges was also a matter of pressing the A button in front of them. Pressing it quickly during a run, allowed me to climb it instantly, but stopping and then pressing the button made for a slower climb.

Combat in the game focuses on melee attacks such as punches and jabs but also incorporates grapple moves that let Wei use the environment to his advantage. You can grab enemies and push them into certain items like dumpster, or you can press the same grab button when the enemy is near a rotating fan, for example, to finish them off. Wei can also counter-attack if you press the Y button right when an exclamation mark appears over an enemy’s head. This fluid combat system reminded me a lot of the more recent Batman games that let you go from one attack to the next in quick succession. As you progress through the game, you gain experience points to upgrade your combat moves or purchase new ones.

Sochan also told me that the game’s combat drew heavy inspiration from films where the protagonist is outnumbered by a group of enemies. In these scenes and in Sleeping Dogs, enemies take turns coming at you, so you have a greater chance of survival. You’re not Batman, and so you must rely on more ground-based attacks like fancy martial arts combos. Much of the light humor of these films is also evident in the game’s occasionally humorous cut-scenes.

The next part of the demo took me to the second-to-last mission in the game that involved a scene where Wei was being tortured by his kidnappers. Sochan mentioned that his team did research and interviewed Triad members who detailed their experiences within the organization to portray the Triads in the game as accurately as possible.

After escaping from their hideout, I was introduced to the game’s shooting mechanics, a combat system that wasn’t planned to be included from the beginning. Guns can’t be stowed away, and instead, are treated like special power-ups that augment Wei’s melee skills. Personally, I preferred playing through the hand-to-hand portion of the demo a lot more just because the combat system was more my style. Even so, these gun-heavy parts still included a lot of running, ducking and covering behind destructible barriers that added to the action in the game. I especially liked the slow-mo effect that takes place when you get out of cover to quickly shoot your gun. Very John Woo. 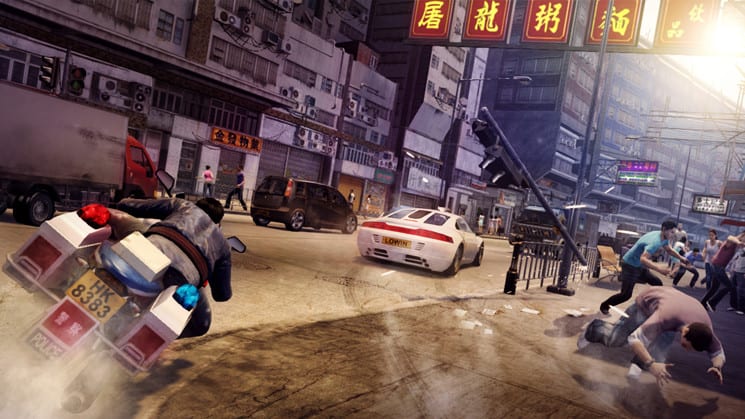 The final part of the demo allowed me to drive around the city and engage in some street racing. The race portions of the game are not forced, but instead tie in with the story’s main plot and missions. Races take place on Hong Kong’s wider streets and give you a decent control of your vehicle even around tight corners. Depending how you drive, whether you run over civilians or not, your score will differ and you’ll accumulate either Triad points or Police points. These are unrelated to the way others perceive your character or the story’s plot, but they encourage players to replay missions in various ways. There is, however, the reputation-based Face System that is affected by the missions you accomplish and gives you certain bonuses when shopping or exploring the city.

While there will be no direct multiplayer, the game will let you track your records like race times, headshots, and other achievements, and compete with others via online leaderboards.

Sleeping Dogs isn’t trying to compete with the big boys. It’s fine with that. Sochan’s goal is to create a very tight experience lasting over 20 hours, making all its individual game elements “genre-defining.”

Watch for Sleeping Dogs when it releases this Fall.